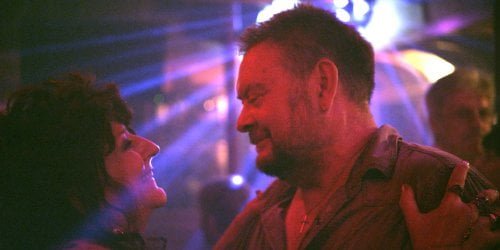 The Camera d'Or winner of the 2014 Cannes Film Festival is an unusual docudrama, based on an idea by Samuel Theis (who cowrote and codirected with Marie Amachoukeli-Barsacq and Claire Burger). Theis plays himself along with his brother Mario Theis and sisters Séverine and Cynthia Litzenburger. Angélique is his mother and this is her story. Angélique is introduced in her natural habitat, long brunette hair piled high and flowing down her back, heavy eye makeup accenting her big eyes, at least one ring on every finger. She's led up the stairs after a long night of drinking, but the next day finds her out and about, paying a visit to Michel, a man she's clearly missed who, he tells her, stopped going to the cabaret because he felt he 'had to pay to see her.' He tells her she's beautiful. He takes her to his shooting range, introducing her to all his friends, clearly besotted. When the proposal comes, she laughs, thinking it's a joke. She seeks advice from one and all, eventually packing up her belongings and moving in with him across the border in Lorraine. When she comes to bed that night, though, Michel's surprised by her satin pajamas and chaste behavior. Michel suddenly finds he's to become part of a rather large family. Her daughter Séverine has two small children. Mario also lives nearby and begins to ask about Sam and Cynthia and we see Angélique get prickly. Sam, who lives in Paris, is doted upon. Cynthia was taken from Angélique and placed in foster care. Via Skype, Sam dictates the letter that will be sent to her guardian, Madame Dechuet (Chantal Dechuet), requesting her presence at Angélique's wedding. We begin to see chinks in the happily-ever-after. When Angélique lights up during dinner with Michel's friends he objects but she won't back down. She flirts with a young man at a German-Franco friendship parade and refuses to go home after a day out with the family. She confesses to her old friends that she shuts down sexually with Michel (he's been led to believe she's waiting for their wedding night). When Sam arrives from Paris, he's left to him to find a venue for the wedding she's purportedly been planning. Thesis was onto something - Angélique is an unusual character and she dominates the screen. The interactions among her mismatched family are warm but not conflict free. The filmmakers and their real life cast involve us in not only the family dynamics but in watching for clues as to just who is most like their mother. As Michel, Bour is a burly nice guy, an obvious choice for a new start on life. There is real suspense in just how everything will turn out. The handheld camera places us intimately within the action. The Alsatian location is unusual, a character within its own right, the subtitled film finding its characters speaking equal parts German and French. "Party Girl" is much like a true life version of Chile's 2013 Foreign Language submission "Gloria" set within a more niche social stratum. Grade: