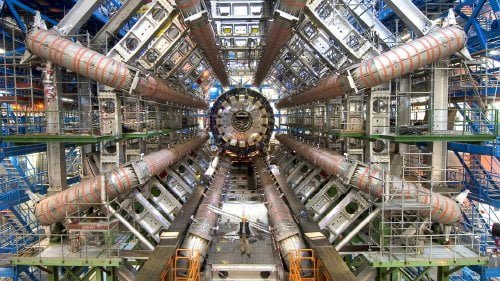 Most of us know little or nothing about the 10-year long project to create the Large Hadron Collider – a massive machine that accelerates sub-atomic particles at tremendous speeds. That lack of knowledge is corrected by first-time documentary filmmaker Mark Levinson with his insightful look into the massive project that sparked “Particle Fever.”

One would think that a documentary about the super conducting super collider would have only a niche audience of physicist nerds and science geeks. But, Mark Levinson rounds up the regular guys working on the project, who also happen to be super smart, and they explain the science of the LHC in a layman friendly way. The scientists talk to you, not down to you. The filmmakers take us into the intricate workings of the collider and introduce us to those brainiacs – from some 17 countries – who have designed and built the LHC. Those manning the project are down-to-earth and brilliant and, as described by post doctoral physicist Monica Dunford, are “like a bunch of kids whose birthday is a week away.” The enthusiasm of Levinson’s interviewees for their project is palpable and they cheer when they accelerate their first sub-atomic particle. To the viewer, this event is seen as a single blip on a television monitor, but to these scientists it is earthshaking. With seemingly limitless access to the facility and its denizens, Levinson shows the immensity of the machine that is five stories tall and forms a 17-mile underground ring, making the LHC the largest scientific project ever – and the designers/builders did not know if their giant gizmo would even work. You sympathize with them when things break down, like 24 enormous magnets that collapse, bringing the project to a halt. You share their joy, too, when things go right in the search for the “god particle” that might hold the secret of the universe and, possibly, of the multiverse.