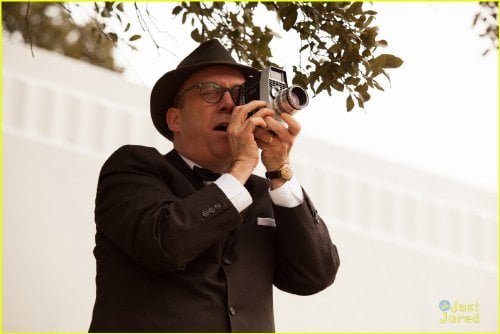 Certain dates and places stand out in our minds, like Pearl Harbor on December 7, 1941 and New York City on September 11, 2001. But, there is one other date and place remembered by generations of Americans – Dallas on November 22, 1963. At that time and place, America lost its innocence when the President of the United States, John Fitzgerald Kennedy, was pronounced dead at “Parkland.”

On November 22, 1963, all of Dallas was in a state of high excitement. President John F. Kennedy and his first lady Jackie (Kat Steffens) were going to motorcade through the city and dress manufacturer Abraham Zapruder (Paul Giamatti, "Sideways," "Cosmopolis") had picked a prime spot to shoot the event with his new Bell & Howell 8 mm camera. Minutes later, resident Dr. Jim Carrico (Zac Efron, "High School Musical," "The Paperboy") is told that the President is being brought in. He surmises it's probably the flu and is stupefied by what he's faced with when JFK is rolled into "Parkland." Peter Landesman (writer, 2007's "Trade") makes his directorial debut with a huge ensemble cast recreating the events surrounding one of the most significant events in American history. Based on Vincent Bugliosi's 'Four Days In November,' Landesman's film isn't about the Kennedy assassination so much as it is about the rippling effect it had on the ordinary people who dealt with its aftermath. There are five groups whose tales are interwoven here - the medical staff at Parkland Memorial Hospital, the Dallas F.B.I., the Secret Service and Kennedy aides who arrived with a living President and left with a coffin, the Oswald family and the man whose 26 seconds of Kodachrome footage would become one of the most analyzed films in history. This is certainly an interesting approach, giving us little unknown details and various viewpoints to consider, but the threads aren't equal creating the whole cloth. It's fascinating to consider, for example, that Kennedy was taken to a teaching hospital where nurse Doris Nelson (Marcia Gay Harden, "Pollock," "Mystic River") was more experienced keeping focus in the trauma room than its fledgling doctor. There is a crush of people around the President, but she reacts to the medical emergency despite her own battered emotions. (It is she who takes what the distraught widow has been holding - the piece of her husband's skull and brain matter which she scrambled over the back seat for.) The enormity of what happens to this team of professionals that day is best summed up by chief resident Dr. Malcom Perry (Colin Hanks, "The Great Buck Howard"), who's shaken 'What's next?' expresses an entire nation's unmooring. There is also the monumental irony that the exact same team of professionals will be called upon the next day to attend to their patient's assassin. Paul Giamatti gives a shell-shocked performance as the unassuming businessman whose name became forever associated with that day. Landesman never shows the assassination nor the film of it, only the reactions to it, and Zapruder is so gut-wrenched by his experience, he insists that frame 313, the gore-splattered head shot, not be published. He's led through the day by Forrest Sorrels, head of the Secret Service in Dallas (Billy Bob Thornton, "Bad Santa"), as they negotiate the processing of this 'new' technology as evidence, historical archive and horrifying home movie. Secret Service Agent Roy Kellerman (Tom Welling, TV's 'Smallville') is devastated to become a member of the first team to lose their man, but steps up in attending to what needs to be done to ensure the President's body is transported with respect, even if it means partially dismantling Air Force One. As Robert Edward Lee Oswald, Jr., James Badge Dale ("World War Z") reminds us that it is not only the families of victims who suffer. Then there is his mother, Marguerite Oswald, played by Jacki Weaver ("Animal Kingdom," "Silver Linings Playbook") like a Rose Bowl float in a military parade, a narcissist thrilling to her new foothold in the history books. Local F.B.I. agent James Hosty (Ron Livingston, "Drinking Buddies"), whose failure to pinpoint Oswald, who he'd been tracking as a generic nutjob, made him a fall guy. Livingston's deer-in-the-headlights performance isn't very engaging and as his boss Special Agent Gordon Shanklin, David Harbour ("Revolutionary Road") simply rants. We learn that Hosty interviewed Oswald's wife Marina two weeks before the assassination and that Oswald came to the department in person to complain, but any sense of intrigue or investigation (should Hosty have known?) fall flat and any ramifications of Hosty's final ordered action remain untold. There are myriad side notes, like the Dallas coroner who tries to insist only he has jurisdiction over 'his body' and the press photographers shamed into becoming Lee Harvey Oswald's pall bearers because his brother had no one else to help him. Jackie Earle Haley ("Watchmen") is the priest who arrives to deliver last rites. Sean McGraw (TV's 'Walker, Texas Ranger') looks a lot like Lyndon B. Johnson, but the focus is on the non-famous here. Mark Duplass ("Your Sister's Sister") and Gil Bellows (TV's 'Ally McBeal') are Kennedy aides and '24's' most prominent Secret Service Agent Glenn Morshower plays a Secret Service agent. Period production details are painstaking from Jackie's blood-stained pink Chanel suit and pillbox hat to the sink and green tiles in a Parkland scrub room. A lot of cigarettes are smoked. Landesman incorporates real archival footage, including the famous Walter Cronkite broadcast, seamlessly with his recreations. James Newton Howard's score begins with jazzy horns before succumbing to the more expected military ones.

New-comer behind the camera, Peter Landesman, creates a gripping true-life drama about one of the great American tragedies of the 20th Century. The script, by Landesman, is an accurate account of the events of that fateful day and its aftermath, and the tyro director does an assured job of telling that story. “Parkland” is a true ensemble docu-drama with a large cast of veteran actors playing the average people who are called upon to perform extraordinarily feats. The film begins on that cool fall day with Abraham Zapruder, film camera in hand, ushering his employees out of their building to see the historic visit by JFK and Jackie. Abe positions himself atop a wall to get the best look at the president’s motorcade. He begins rolling film just as the president’s car comes into view and, when the deadly shots are fired, keeps the camera running. He did not know that he had recorded what would become the most examined piece of film in history. “Parkland” shifts gears as the president’s security team leap into action to get him to the titular hospital. At first, the staff, especially resident doctor Charles “Jim” Corrico (Zac Ephron), is in shock over the identity of their patient. Soon, though, the emergency team pulls out all stops to save their president, but in vain. JFK is pronounced dead at 1:00 PM Central time. The actions shifts, once again, as the Secret Service and FBI investigate the murder. The events depicted are well-researched and accurate (with omissions and embellishments, as expected in any good docu-drama) and “Parkland” is an honest account of those horrible days for America. It is hard to pick a star among so many fine actors. There are certain pivotal characters, like Dr. Corrico and his boss, Dr. Malcolm Perry (Collin Hanks), who must give their all to try to save both the president and his alleged killer, Lee Harvey Oswald. Two actors/characters, though, do give award-worthy performances – Paul Giamatti as Abe Zapruder and, in an extraordinary performance, Jacki Weaver as Lee Harvey Oswald’s mother, Marguerite. Giamatti’s Abe Zapruder is a soft-spoken patriotic man who understands immediately the importance of his short piece of film history. Weaver is a fearsome character as she zealously, even fanatically, defends her son, Lee, telling all that he was a secret agent for the US government. Many characters, like Oswald’s brother, Robert (James Badge Dale), are given depth and dimension, not an easy thing with so many characters. “Parkland,” by Hollywood standards, was made on a shoestring budget. The limited funds the filmmakers had are put up on the screen to show the clothes, cars and locales of the time. There is a vintage quality to the proceedings. I give kudos to the production design and costume teams for putting us in the time. “Parkland” is a well-told, nicely crafted docu-drama that fills us in with what transpired between that fateful day on Dealey Plaza and the putting the President to his final rest at Arlington National Cemetery. The film wastes no time and packs every minute with information, revelations and conjectures. Peter Landesman comes on the scene with a bang in his debut and handles his incredibly large cast with even skill. It helps, of course, that this large cast is also very talented.