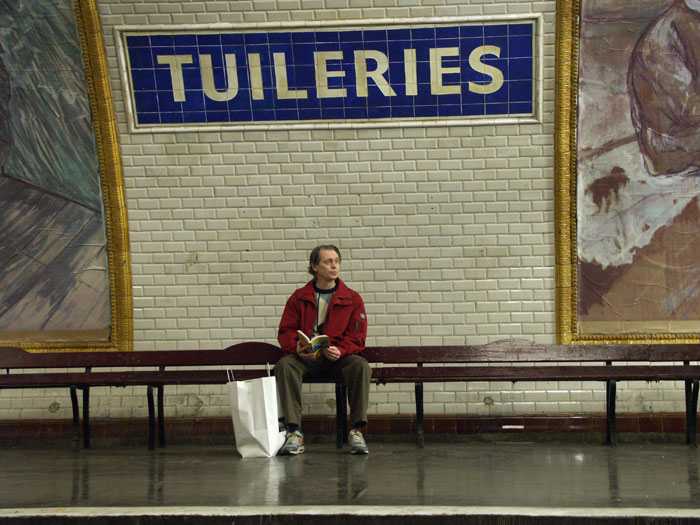 Eighteen acclaimed filmmakers are each allotted one of the City of Light's twenty Arrondissements to fashion a love letter to the French capital equated with romance and declare "Paris Je T'Aime."

Omnibuses are almost invariably uneven efforts and "Paris Je T'Aime" is not exception, and while several recurring themes are to be found within its eighteen stories, oddly enough, a love of Paris is not one of them. The first effort, Bruno Podalydes's "Montmartre," could have been an amusing diatribe on parking, but instead morphs into a strange man meets woman encounter that goes absolutely nowhere. The segments have been edited together in such a way, that one often cannot tell where one stops and the next begins except for the brief titlings that shift from left to right, which makes "Montmartre's" departure a bit confusing. Three of the stories take on its immigrants with Gurinder Chadka's ("Bend It Like Beckham") a lightweight charmer, Walter Salles's ironically obvious and Oliver Schmitz's a weightier, haunting piece that reflects the troubles within its helmer's own reunified country (Germany). In Gus Van Sant's entry, Gaspard Ulliel ("Hannibal Rising") does not realize that the young man he recognizes as a soul mate (Elias McConnell, "Elephant") does not understand French and in Sylvain Chomet's ("The Triplets of Belleville") delightful whimsy, two misunderstood mimes fall in love without a word. Marital breakups are intriguing in Isabel Coixet's hands, but rather dull in Frederic Auburtin and Gerard Depardieu's, perhaps due to star/writer Gena Rowlands' cliched and awkward dialogue. Japanese director Nobuhiro Sawa relies on the recent Asian child ghost genre for his Juliette Binoche starrer, which uses the Place des Victoires for startling mise en scene while Alfonso Cuaron uses a child as his punch line. Four of the stories features actors (counting those mimes) and the profession is used to fake out its audience in two of them, Richard LaGravenese's Bob Hoskins/Fanny Ardent starrer and Tom Tykwer's tale of Natalie Portman's relationship with a blind boyfriend (in which his inspiration seems more Chris Marker than Kieslowski). Olivier Assayas uses Maggie Gyllenhaal as an American actress scoring drugs and hoping to score her dealer (his last film, "Clean," featured a female rock star using drugs...hmmm). The Coen Brothers' hilarious outing seems inspired by the Parisian grotesqueries of 'Delicatessen' and that film's codirector, Jean-Pierre Jeunet, is amusingly tweaked in Christopher Doyle's Asian hair salon story 'Porte de Choisy' when an 'Amelie' headshot continuously shows up as Chinese women's requested new look (Doyle's pairing with Paris's Chinatown shows more love for the Asian locales he shoots with Wong Kar Wai than for France). Several directors show up in other's work - Barbet Schroeder, who does not author a piece, stars in Doyles's entry, Depardieu cameos in his own, Wes Craven is a vampire's victim in Vincenzo Natali's over the top vampire tale (which says what about Paris, exactly? that the city and its tourists eat each other alive?) and Alexander Payne shows up in Craven's Pere-Lachaise Cemetery set romantic ditty as Oscar Wilde. And God Bless Alexander Payne, the only director who actually embraces the collection's title as inspiration for his wonderful closing piece in which a Denver postal clerk (Margo Martindale, "Million Dollar Baby") with a hideous French accent narrates her first trip to Paris in the native tongue and makes us fall in melancholy, vicarious love. The producers, who excised segments by Christoffer Boe ("Reconstruction") and Raphael Nadjari, knew to save the best for last.