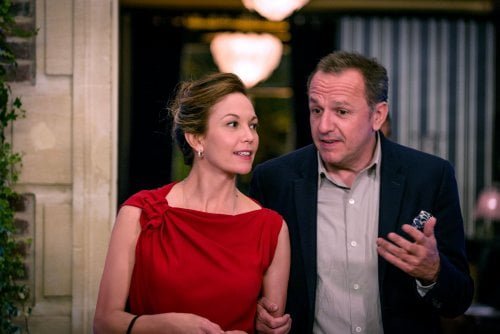 Anne (Diane Lane) and Michael (Alec Baldwin) are in Cannes for a vacation. But, for movie producer Michael, business comes first: “Vacation can wait” and he is flying off to Budapest on his latest project. Anne’s ears are bothering her and she begs off the trip. Michael’s French associate, Jacques, volunteers to drive her to Paris but, along the way, Anne learns that “Paris Can Wait.”

Suffering an earache, Anne Lockwood (Diane Lane) is advised not to fly from Cannes on her movie producer husband Michael's (Alec Baldwin) next stop in Budapest. As Michael will be returning to Paris where his business associate Jacques (Arnaud Viard) is heading, Anne agrees to drive with Jacques instead. But the flirtatious gourmand has other ideas and Anne finds herself on an eye-opening journey when he tells her "Paris Can Wait." In 2009, writer/director Eleanor Coppola, was at Cannes with her husband when a bad head cold prevented her from continuing on with him to Eastern Europe. She accepted a ride with a Frenchman to Paris, expecting to be there in 7 hours. It took more than 3 days. When she described her unexpected sojourn to a friend back home, she was told it would make a great movie. And so at the age of 81, Eleanor makes her feature film debut with something that resembles a more romantic version of "The Trip" without all the celebrity impressions. As Anne packs, Michael is continually on the phone (his ring tone is a barking dog) as we observe a marriage of a high-powered businessman who relies on his wife more than he realizes. Jacques is quite the contrast, complimenting Anne on her appearance, stopping their cab to purchase local foods for their flight and ear drops for the ailing woman. After Michael departs with a whispered warning about the French, Anne is surprised right off the bat as she attempts to get into Jacques' Peugot convertible - first they will have lunch! Along the way they will view Provence's Sainte-Victoire Mountain and the Pont Du Gard aqueduct, Anne's amateur photography revealing an artistic eye (Coppola, in addition to her documentaries, is a mixed media artist). Anne is on her guard, though. Noting Jacques' finger caressing hers, she quickly withdraws her hand. When he decides to stop for the evening at a charming hotel, he asks for her credit card, saying he will explain later. As their journey continues, Anne relaxes more and more, caught up in Jacques' spirit of adventure and love of food and good wine. When his Peugot breaks down, Jacques reacts by having a picnic (Anne temporarily fixes the broken fan belt with pantyhose). Jacques indulges Anne's every whim, even ones she doesn't know she has, filling the back seat of their rental with roses and, learning of her one vice, ordering every chocolate dessert at the end of an already extravagant meal. He also goes unsettlingly deep in conversation, discussing French and American views towards marriage, inadvertently revealing a hurtful secret. A stop in Lyon to 'visit a friend' at The Institut Lumière results in a private tour for Anne and a tryst for Jacques, Martine (Elise Tielrooy) joining them for a taste sampling at Lyon's famous food hall. Martine advises Anne that she'll never find a better traveling companion than Jacques. By the time she gets to Paris, Michael is frantically trying to hunt her down, Jacques sent on his way with a kiss...an intriguing package arriving later. Coppola's cast her film well, Lane the picture of graceful maturity, a woman used to stifling her own needs in service of family. The actress sheds Anne's cares away slowly, as if sinking into a warm bath. Filmmaker Viard is a delight as the irrepressible Jacques, a kind and considerate man with a hint of the rogue, a true charmer. The production will be catnip to the romantic traveler, production designer Anne Seibel ("Marie Antoinette") finding magical, out of the way places. Costume designer Milena Canonero, "A Clockwork Orange," "The Grand Budapest Hotel") outfits Lane in an elegant cream colored shirt and pleated pants, Viard in mismatched socks. Rounding out the female-centric crew are "Girlhood" cinematographer Crystel Fournier and a score by Laura Karpman ("Black Nativity"). (Coppola credits her husband Francis for helping her over financial and technical hurdles.) "Paris Can Wait" contemplates a woman's second start in life, the opportunities presented by an empty nest. Lane's direct camera wink at the film's close comes from a woman who's learned to indulge herself. Grade:

Think of Michael Winterbottom’s two (and upcoming third) “The Trip” films, but without the funny, caustic humor of Steve Coogan and Bob Braydon. Change the equation and add the always radiant Diane Lane and a charming performance by Arnaud Viand and first time feature film director, 81-year old Eleanor Coppola makes her own “Trip.” Workaholic Michael puts his movies over his marriage to Anne. She is used to it, though, and agrees to let Jacques drive her to Paris. After all, they should arrive there in time for dinner. But Jacques is a Frenchman to the core and exudes his love for life – food, friends, exploring the countryside and romance are integral to the man. Of course, the first thing he wants to do is stop for lunch. Lunch runs far later than Anne expected and Jacques suggests that they stay at a hotel for the night. She is mildly suspect of Jacques intentions but he is nothing less that a gentleman. The next day, they continue their trip to Paris and Jacques suggests another detour to the ancient Roman aqueduct in Provence. More food, a car full of roses (Anne’s favorite flower) and another overnight stay is in store. The pattern continues and Jacques learns that Anne is a chocoholic, so you can guess that outcome. “Paris Can Wait” is a romantic journey. Then again, it is not. Not only does Anne succumb to Jacques’s Gallic charms, so does the viewer as he shows his companion, unintentionally, how different he is from Michael – in a good way. There is a natural feel between the two leads as they ride the roads and get to know each other’s most intimate secrets. And, we get to know them. This is the kind of road trip movie that is so well done and the two characters so fully realized that I wanted the trip to continue. Winding your way from Cannes to Paris, stopping to stay, eat and sightsee sounds like a pretty darn good vacation to me, especially with Anne and Jacques as fellow travelers.