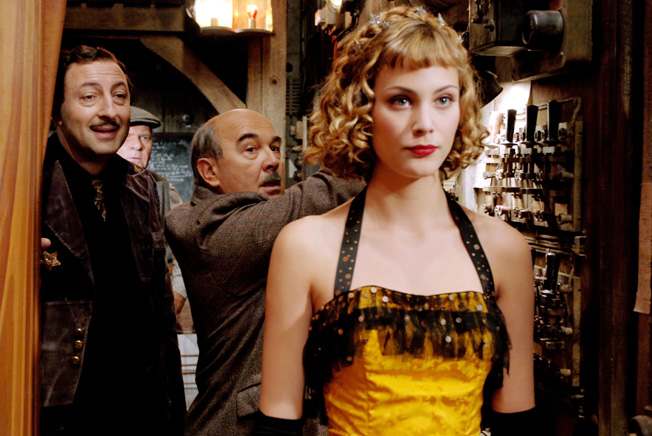 It is New Year’s Eve, 1936, and the Chansonia, a popular Parisian cabaret theater, looks to keep on pleasing and entertaining its loyal patrons. However, the threat of a labor strike by the workers to be paid and the iron grip of local political boss and theater-owner, Galapiat (Bernard-Pierre Donnadieu), force the Chansonia’s proprietor to commit suicide. The theater is shut down. However, the rise of the left-wing Popular Front in France sparks the theater workers to occupy the place and reopen the venerable song palace in “Paris 36.”

Sophomore writer-director Christophe Barratier came to world attention with his debut feature, the uplifting musical drama, “Les Chloristes,” about a school of unruly post-WWII orphans who are joined, by their teacher, in song. His second time around still features music at its core but represents a quantum leap in budget and production. “Paris 36” (the title changed from its original, “Faubourg 36”) is a big, sprawling period piece set in a turbulent time, before the more turbulent WWII, when the labor unions opposed the fascist French regime. Set in the social and political microcosm of the Chansonia Theater, “Paris 36” is more than bringing a failed venue back to life against all odds. It is also a romance, a political drama, a social commentary of mid-1930’s France, a tale of a reclusive songwriter and the story of a father and his beloved son after their forced separation. This makes for a rambling saga that is interesting, entertaining, unenlightening and too long with its several endings ­ or, should I say, an ending that takes 20 minutes to wrap up the multiple plot threads. Things begin with theater manager Germain Pigoil (Gerard Jugnot) facing a verbal tirade by labor activist/stage technician Milou (Clovis Cornillac), who threatens to shut the theater down if the workers are not paid immediately. Shortly thereafter, crooked politico Galapiat calls in his marker and the theater is forced to close. Four months later, with the country in the midst of right versus left political strife, the theater workers are all still out of work. Desperate, they unite and stage an occupation of the Chansonia, refusing to leave and promising to reopen their beloved music hall once again, with Jacky the Impersonator (Kad Merad) as headliner. Galapiat, heeding the advice of his accountant, puts on the cloak of benevolent patron and permits the music house to open. It does not look like Pigoil and company will succeed with only Jacky as talent until, that is, the arrival of a golden-voiced young beauty, Douce (Nora Arnezeder), whose beautiful warbling brings in the crowds. Things are not secure, though, when a romance sparks between Douce and Milou and powerful Galapiat wants the pretty singer for himself. Meanwhile, unemployed Pigoil loses custody of his son, Jojo (Maxence Perrin), to his estranged younger wife, Viviane (Elisabeth Vitali), and must suffer the loss without recourse. Across the street from the theater lives “Radio Man” (Pierre Richard), an old recluse who may have a connection with Douce. Throw in a Busby Berkeley-like stage number near the (everlasting) finale and you have a film that tries to be all things to all people. And, this is the problem with “Paris 36.” It is, as I said, entertaining but the multiple plot lines try to leap from drama to comedy to romance to music numbers to social and political statements. It is with these many acrobatic leaps that “Paris 36” falters, particularly during the last 30 minutes where Barratier and his co-writers Julien Rappenau and Pierre Philippe (dialogue) cannot seem to find an appropriate ending. Instead, the film ends several times and would have worked much better if a single conclusion could have been decided upon. Cast and crew do a fine job in creating a 30’s French musical. The thesps are solid if not outstanding (mostly unknown to American auds) and the production, set and costume are well rendered all around. “Paris 36” has a lot of heart but needs a firmer hand in its storytelling. More is not necessarily better.