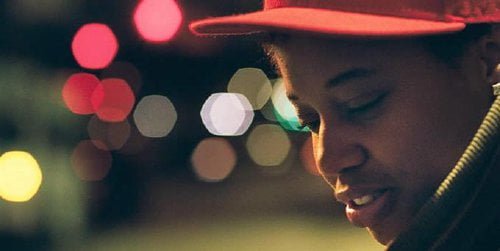 Alike (Adepero Oduye, 2007's "Pariah" short) is a seventeen year-old Brooklynite beginning to immerse herself into the local lesbian scene via her best friend Laura (Pernell Walker, 2007's "Pariah" short). She's the eldest in her family of four, but while she voices her opinions strongly, she has yet to make a stand on her sexuality. She has an ally in her father, Arthur (Charles Parnell, TV's 'All My Children'), but he's often working or too willing to defer to her mother, Audrey (Kim Wayans, TV's 'In Living Color,' "Juwanna Man"), whose antennae has detected a fact she'd rather suppress. Audrey is prepared to treat her daughter like a "Pariah."

Making her feature debut with an expansion of her 2007 short, writer/director Dee Rees takes on semi-autobiographical subject matter with aggressively butch/stud overtones that make the content seem fresh even though Rees sticks to an indie 101 filmmaking style (city light lens flare, handheld camera) to present them. Rees shows a real knack, though, for casting and eliciting strong performances. That and a little touch of story irony make "Pariah" a solid dramatic debut. Rees tries to grab us by the throat with an almost assaultively vulgar opener. Alike is at a strip club with Laura where the house rap leaves nothing to the imagination. On the subway headed for home, she changes her clothes to present the unformed identity she's been using with her middle class family. There are rows with mom over curfew, her refusal to attend the homecoming dance and the tailored clothing she picks for church instead of the more feminine threads Audrey insists on (Audrey's choice of clothing is too naive to be believable). So it's a good thing that while younger sister Sharonda (Sahra Mellesse, 2007's "Pariah" short) catches Alike modeling a strap-on (more of that stud behavior), it's hidden when mom bursts into the room. Audrey decides that Alike's friend Laura is the root of all evil, and so forces the seemingly goodie-two-shoes Bina (Aasha Davis, TV's 'South of Nowhere'), the daughter of a colleague, into Alike's schedule. To Rees's credit, Alike isn't just coming of age via her sexuality. She's also a budding writer with a strong teacher, one who delivers tough love when she thinks creative talent is coasting. Rees's writing of Alike's poetry shows the teacher's influence, the 'after' work as read by Oduye one of her film's highlights. There is also the dilemma of first romance and learning to recognize true love over infatuation. Rees uses Black femme indie rock as the surprising common ground between Alike and Bina and the artists and songs she's chosen make for one of the year's most inventive soundtracks. The parents have a nice yin yang of personality and viewpoint and Rees underscores the gradual groundswell of Arthur's support for Alike with the little tell of his abandonment of her nickname.