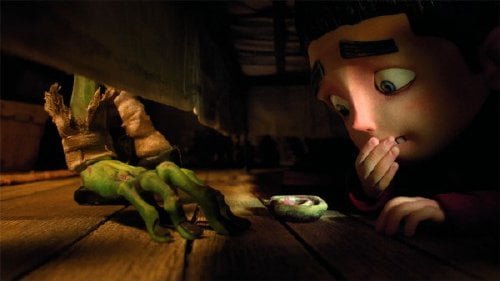 Norman Babcock (Kodi Smit-McPhee) is different from other kids. He sees and talks to ghosts. Because of this he is ostracized and bullied by his fellow students, ridiculed by his sister Courtney (Anna Kendrick) and his only friend is the school’s “fat boy,” Neil (Tucker Albrizzi). Danger lurks, however, when the sleepy town of Blithe Hollow is revisited by the spirit of the witch who was executed for her “witcherie” hundreds of years ago. She is back to wreak havoc on the town and its denizens and the only one who can save them is “ParaNorman.”

11-year-old Norman Babcock (voice of Kodi Smit-McPhee, "The Road," "Let Me In") is an outcast. Even his own family thinks he's weird what with his addiction to horror movies and conversations with his dead grandmother (voice of Elaine Stritch, TV's '30 Rock'). When he walks down the streets of Blithe Hollow he greets generations of dead townies, but he's not allowed to talk to his even weirder, living Uncle Prenderghast (voice of John Goodman). But when the man dies, he comes to tell the boy he must take action by retrieving the book from his rotting corpse's fingers to read at Blithe Hollow's infamous witch's grave because Norman is the only one who can stop her three hundred year-old curse in "ParaNorman." Beginning with a zombie-movie-within-a-zombie-movie, this sweet retro paean to kids who love their monsters also has a message for kids about tolerance and bullying. Not only is the hero of the piece picked on, but the curse he's tasked with stopping was retaliation for bullying of another kind - a three hundred year-old accusation of witchcraft against a girl with whom Norman has more in common than being persecuted. This is the second stop-motion animated feature from Laika to be made in 3D, but while one can see parallels to their earlier "Coraline," "ParaNorman," written by that film's storyboard supervisor Chris Butler and codirected by him and Sam Fell ("Flushed Away," "The Tale of Despereaux"), has a weaker story which is stretched out far enough to produce sag, ironic for a film whose every frame must be meticulously constructed. One marvels at the visuals (production design by Nelson Lowry, "Fantastic Mr. Fox"), though, from the Salem, MA inspired historical district and blue collar neighborhoods to references to horror films from childhood through "The Nightmare Before Christmas." Norman's walk to school is like a history lesson as he passes everyone from a recently departed neighbor to folks from the past century (in a sad visual gag, a bird, strangled by a plastic six-pack ring, flies by). He gets to school and is as invisible as the dead people he can see except to the hulking Alvin (voice of Christopher Mintz-Plasse, "Superbad's" McLovin') who defaces his locker daily. During a rehearsal for a school pageant on the Puritans, directed by the tyrannical Mrs. Henscher (voice of Alex Borstein, 'Family Guy's' Lois Griffin), Norman's reality is replaced by a look at the past and he flips out big time, earning himself more grief, but the incident gains him a friend, another kid bullied for being a 'fatty,' the naive Neil (voice of Tucker Albrizzi, "Alvin and the Chipmunks: Chipwrecked"). This bodes well for Norman's older sister Courtney (voice of Anna Kendrick, "Twilight," "50/50") when he doesn't come home that night - she gets to meet Neil's older brother, the muscular Mitch (voice of Casey Affleck, "Gone Baby Gone"), when they set off on a search. The film tweaks old timey horror via Norman's fandom of same with his graveyard alarm clock, monster slippers and toothbrush and a climax featuring an enraged mob. Newer films are nudged with Norman's ringtone and Neil's hockey mask. When Neil asks Norman if his beloved dog, run over by a truck, is still around, we're treated to a happy one in two parts, like Jack Skellington's ghost dog. The witch, Agatha Prenderghast (voice of Jodelle Ferland, "Silent Hill," Twilight's" Bree Tanner), and her cursed zombies led by The Judge (voice of Bernard Hill, "Titanic") are right out of "The Crucible." If only the film didn't bog down in repetition and overkill. Where "Coraline" had a very stylized, angular look, "ParaNorman" surprises right from the onset with its realistic, albeit exaggerated, creations. Norman's mom (voice of Leslie Mann, "Rio") looks worn, her face drooping from under her eyes to under her chin, yet you can see her pretty teenaged daughter's face as well. Courtney's sugar pink lip gloss is almost a living entity unto itself. Henshaw sports rosacea and underarm flab. The porous, cracked surface of Uncle Prenderghast's muddy green foam rubber vest astonishes. Homes are modest, in need of maintenance and lean just enough to look 'off.' Interiors at Prenderghast's are those of a hoarder and the effect is creepy. Original Music by Jon Brion, "Eternal Sunshine of the Spotless Mind") is simple, mournful and melancholy, rather than the typically over-orchestrated or theremin-based horror score. "ParaNorman" shuffles a little too slowly but its got brains.

Stop motion animation is becoming an anachronism, now, with the advances in CGI over the past two decades. But, the quality of this art, when done well, is unsurpassed, even by computers. Laika Entertainment, the folks that brought us the marvelous “Coraline (2009)”, continues their exploration into the art of stop motion anime and the result is the charming and delightful “ParaNorman.” Norman is misunderstood by the living but is quite at home with those spirits that have not left for the next life. For example, his grandma (Elaine Stritch), long dead, inhabits the sofa in the Babcock living room and Norman converses with her all the time, much to the dismay of his dad (Jeff Garlin) and mom (Leslie Mann). For Blithe Hollow, though, Norman’s supernatural power will become the only thing between the town and the revenge of the spirit of Agatha, the falsely accused and executed witch. There is a whole lot more going on as Norman tries to stop the destruction of his home town but that is left to you, the viewer, to enjoy. “ParaNorman” is definitely not geared for younger kids – witches and ghosts do not usually sit well with the little ones. But for older kids and beyond, there is a treasure trove of imagination, good story-telling and excellent animation and production.