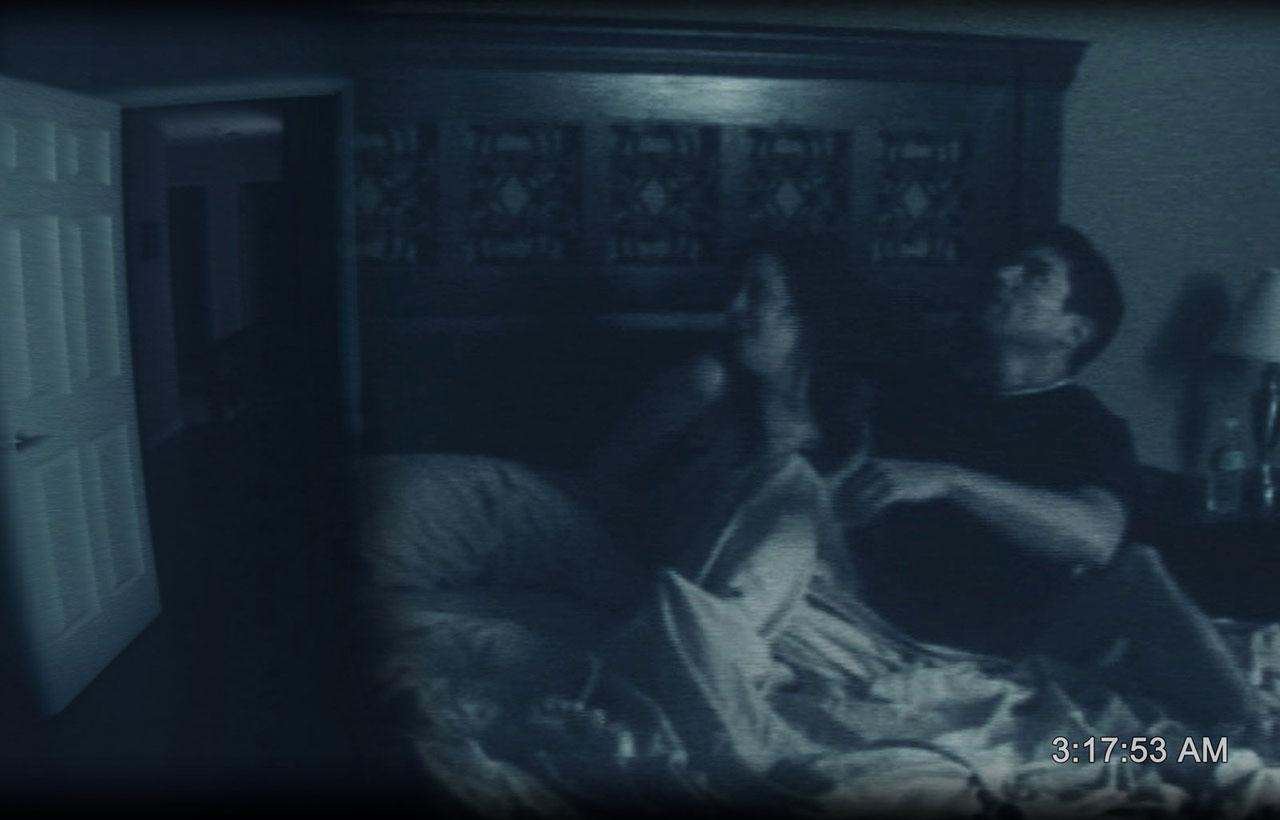 'Engaged to be engaged' couple Katie Featherston and Micah Sloat have recently moved into a San Diego semi-detached when Katie finally tells Micah that she's been haunted by a scary spirit intermittently since she was 8 years old. Now that spirit has returned in their new home and Micah is convinced he can resolve everything with a new special video camera and microphone designed to record "Paranormal Activity."

Written/editor/director Oren Peli proves that the old adage about small budgets fostering creativity with his horror film debut. Although he has borrowed liberally from films from "The Blair Witch Project" to "The Exorcist" and a dash of "Lost Highway," "Paranormal Activity" is a sterling standout in a genre that usually disappoints. Using the art of suggestion and no special effects, Peli manages to build a sense of dread even while he often has us laughing. Make no mistake, this isn't one of those funny horror films, like "Zombieland," but one which mines humor from its characters and situations naturally. Then, in the last five to ten minutes, Peli delivers a freak out payoff. Using the 'found footage' hook (see "Blair Witch," "Cloverfield," "Diary of the Dead"), Peli throws us right into the action as Micah sets up his camera and asks Katie to whisper from across the house to make sure his mike is sensitive enough for their needs. It takes a while before we find out that the house isn't haunted per se, but that Katie is, and that Micah isn't necessarily convinced even as he acknowledges some strange noises and events. A visit from a psychic (Michael Bayouth) is used for exposition, to lay some ground rules and for Katie to tell her back story. We learn that a dark figured used to appear at the foot of her bed and that her younger sister, who slept in the same room, would also see it. Their house burned down for unknown causes, but at the age of fifteen, the spirit returned. The psychic claims that the spirit is not a ghost, but a non-human demonic spirit and that attempting to contact it will encourage it and that it feeds on negative atmosphere. Just guess what will happen next! The psychic tells them to contact a Dr. Johan, a demonologist, but Micah resists. Once his camera begins to record some strange things, like the bedroom door being moved, Micah begins to pester Katie about getting a Ouija board (!). His childlike enthusiasm annoys the hell out of Katie and they begin to fight. The haunting begins to migrate into possession and things escalate. The scares in "Paranormal Activity" are simple yet effective - objects moving of their own volition, non-human footsteps captured in talcum powder. Katie Featherston not only creates a very believable character, an English major who knits and hangs out with friends, but becomes part of the creep fest with some deft and subtle physicality. The film's penultimate scare is mostly due to Featherston's performance and will have you wondering just how the filmmakers accomplished it. Micah Sloat does just what he's supposed to do - get on our nerves along with Katie's while also delivering an assuring support. He's also the source of most of the film's funny. The look and sound are just what they purport to be - video level, tinny sound - and the everyday location adds to the 'it could happen to you' feel. Peli cheats slightly with the found footage device unless we are to believe Katie would be filming Micah looking things up on his computer or that the camera would be reset to capture certain action, but its a forgivable cheat (an opening title card states that Paramount Pictures wishes to thank Katie Featherston, Micah Sloat and the San Diego Police Department, although it would have been more accurate to only include the latter). "Paranormal Activity" made its initial appearance in 2007 at a couple of film festivals and it is a wonder it's taken this long to resurface. It kicked off Austin's Fantastic Fest with simultaneous screenings including one Brookline, MA's Coolidge Corner Theater and will continue to roll out with midnight sneaks in places like Baton Rouge, LA; Madison, WI and Columbus, OH. People who wish to see the film, and if you're a horror fan you should, are encouraged to visit http://www.paranormalmovie.com and click on the 'Demand It' button - clearly Paramount is hoping to create excitement by treating the film with exclusivity and I, for one, hope they're successful. The film is a real treat - I actually got a head to toe chill at one point - but the overly impressionable, especially those who live alone, should beware.