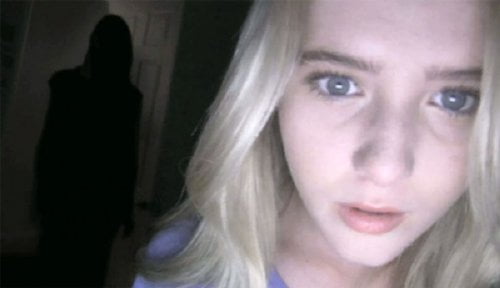 When the strange six year-old across the street's mom is rushed to the hospital, fifteen year-old Alex (Kathryn Newton, "Bad Teacher") is unnerved that Robbie (Brady Allen) will be staying with them. Soon she's noticing strange things happening around the house, including the increasingly reserved behavior of her own adopted six year-old brother Wyatt, so she gets her boyfriend Ben (Matt Shively) to set up the family's well-situated laptops to record what will be "Paranormal Activity 4."

Directors Henry Joost & Ariel Schulman ("Catfish," "Paranormal Activity 3") kept the threequel on life support with that oscillating fan innovation and Christopher Landon's (all 3 "Paranormal" sequels) script, which took the story back a generation and expanded the lore. But this fourth installment plays like a holding pattern to get to five, offering some same olds, ditching others and adding conventional horror cliches (a cat jumping into the frame, ferchrissakes!) which, of course, only detract. There's a couple of neat moments and the last five minutes or so are effective, but it's not worth the repetition to get there. The film starts with a recapping of 'what happened to Hunter' in 2006 and a reminder that he and his murderous, possessed Aunt Katie (Katie Featherston, "Paranormal Activity") are still missing before we jump to some over-obsessively vidcammed soccer game activity where Alex plays with little bro and we note a very odd kid in the distance. This time around, the filmmakers rely on a Skype device, so most of the film is seen from the POV of a laptop screen (and when it isn't it makes little sense as to why it would be recorded). Alex talks to Ben constantly and we're always aware of what she cannot see behind her. Usually it's nothing. Tech geek Ben (and the two teenagers are, thankfully, quite likable) sets up this story's gimmick in Alex's living room - a motion capture spot device which happens to pick up traces of the unseen 'friend' Robbie, and then Wyatt, talk to. Is this Toby? There appears to be a second, much larger demonic presence that appears later, first to do the usual sheet thing, then to start aggressively dragging and tossing people around. There's also a tip of the hat to "The Shining" when we see Wyatt tooling around on a Big Wheel. Furniture moves. Chandeliers sway. Doors open by themselves. Something appears to be sleeping in Wyatt's closet. Kids talk to unseen entities at 3 a.m. There are loud bangs and low rumbles. We get the usual mutli-room montages of absolutely nothing happening, but the time-flickering human-standing-by-the-bed creepiness is gone. When something weird happens to mom with a large kitchen knife, she doesn't listen later when her husband tries to tell her about a similar experience, something which would have certainly gotten my undivided attention. Alex and Wyatt trace the weird pattern Robbie drew on Wyatt's back to a symbol used to possess male children. Of course, we know who that unseen, hospitalized mom will turn out to be and she reappears in all her heavy-footed glory. Except when she appears silently for the expected shock cut. In the end, though, you'll start to wonder why we had to go through all this just to get right back to where we started. Which is exactly what happens. Sure, "Paranormal Activity 4" offers up a few well executed frights, but the experience to get them is an exhausting and depressive money grab.