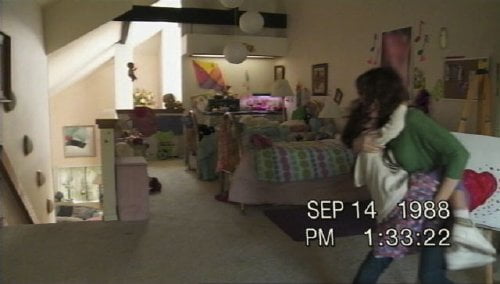 In 2005 Katie (Katie Featherston) stored boxes of videotapes from their grandmother Lois's house in her younger sister Kristi's (Sprague Grayden) basement. In 2006, Kristi's house was ransacked and the videotapes were among the only things missing. What they showed was from 1988, when Katie (Chloe Csengery) and Kristi Rey (Jessica Tyler Brown) were first tormented by a demon, one whom Kristi named Tobey, in "Paranormal Activity 3."

"Paranormal Activity's" writer/director Oren Peli, who still produces, passed his directorial baton first to Tod Williams and now, for the threequel/prequel to the "Catfish" duo of Henry Joost and Ariel Schulman, a teaming that cannot help but make one wonder why the filmmakers who faced such an onslaught of doubt about the validity of their debut would take as their next project a 'found footage' film in which their job is to believably fake reality. Surprisingly, especially given that this, like the second which was so cleverly integrated to the first, was written by Christopher B. Landon, the answer is that the "Catfish" guys provide the least convincing reality. The prequel still has some decent ideas and a couple of jolts, but it also repeats creeps from the first two films, lowers itself to using cheap scares and uses the camera POV at times when no sane person would cover his face with a viewfinder. We're also left to wonder just who edited together grandma's old tapes. Unlike the first two films, there are no opening or closing titles thanking police departments or the like. Instead we get two brief setups before being plunged back sixteen years where Katie and Kristi's mom Julie (Lauren Bittner, "The Mighty Macs") is raising her girls with Dennis (Christopher Nicholas Smith), a wedding videographer (the better to set up surveillance, my dear). It's never made really clear if Julie and Dennis are married, but we do learn he's not the girls' dad when Julie has a discussion about him with her mom (and why would she allow a candid discussion about the man she loves when she knows he'll see a recording of it later?). One must give credit to Landon, however, for making us read between the lines, as elements of that conversation come back with horrific new meaning after one views the film's final scene. "3" kicks off when Dennis becomes disturbed by all the weird noises in the house, something which, oddly enough, began to occur around the same time Kristi 'invented' her invisible friend Tobey. He sets up a camera in the bedroom which inspire he and Julie to make a sex tape. They're uncomfortably amused, but engaged when suddenly Kristi's picture drops from the wall. An earthquake has struck. But we see something really creepy after they leave the room and Dennis finds it later, reviewing the tape with his business partner Randy (Dustin Ingram). Randy's so turned on he finds and brings Dennis a book on Demonology, but they keep their findings to themselves, not wanting to 'freak out' Julie. And so we get the usual hi-speed fast forward evening tapes, the time counter clicking away until the tape stops for us to see something interesting. Kristi wanders round at night and seems to stir things up. We see her talking to an unseen Tobey after Dennis sets up more cameras. This film's most interesting idea is to use the base of an oscillating fan as a camera mount, so that our view sweeps back and forth between kitchen and living room, but the devise isn't really used to as good effect as it might have been. Editor Gregory Plotkin sometimes trims surveillance footage too quickly, denying us the full sweep of the camera and instead of brief suggestion, we're given now-you-see-it-now-you/they-don't scenarios. Scares are also sometimes mitigated by foreshadowing - when a babysitter throws a sheet over herself to play a ghost for the girls it's not too difficult to see what's coming. The film's final act takes place at Lois's home, which is good if for nothing but a change of architecture (mom's house has a very similar layout to the future homes of her daughters). Events take an extreme interpretation of the conclusion Ali drew in part 2, but frustratingly, if it looks like the story will wrap with this one, it doesn't. There are still loose ends left in both past and present leaving the door open for four. But while the first two films were genuinely unsettling, part three only marginally makes the grade.