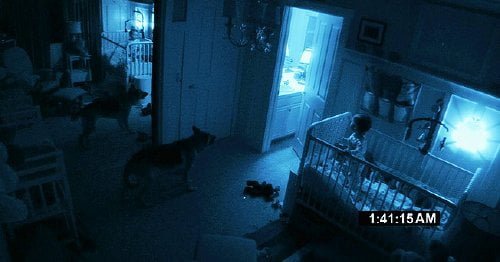 Remember that sister Katie (Katie Featherston) told Micah about and how the two of them were terrified by an evil presence during their childhood, at least before the house burned down? Well, Kristi's (Sprague Grayden) just brought home baby Hunter and her husband is busy video taping away. But by the time Hunter turns 1, things around the house begin to get disturbing, beginning with a violent break in by someone or ones who trashed the house and only took a necklace Katie gave her sister. Six security cameras are installed but the family, which includes Daniel's (Brian Boland)'s sixteen year old daughter Ali (Molly Ephraim) from a prior marriage, don't think to watch what's going on in the middle of the night in "Paranormal Activity 2."

From the trailers, "Paranormal Activity 2" appears to be more of the same, except with a baby and dog in jeopardy, but what television writer/producer Michael R. Perry ("American Gothic," "Stephen King's Dead Zone") has done is taken Oren Peli's original film and woven a prequel/sequel out of it, not unlike "The Godfather Part II." We don't know there's any attachment to the first film as the foundation is laid. A video montage is fast cut together, beginning with a 'tour of the house' for Hunter to give us the lay of the land and lots of happy mommy/baby play. There are some subtle hints of danger, like when Ali says that Hunter is not allowed into her room 'unless he's invited,' a suggestion of vampirism. Even scarier is when Hunter's introduced to his Auntie Katie and we figure out this is shortly before things start getting wonky at Katie and Micah's place. After the cameras go in director Tod Williams ("The Door in the Floor") falls into a sequence of overnight montage shots - we see the front entryway, the pool outdoors (its automatic pool cleaner scampering along, but always out of the pool come morning), then the kitchen into the living room, then the living room into the kitchen, front hallway, Hunter's room. For a while nothing happens, then little movements begin. And, of course, it doesn't have to be nighttime. Like "Halloween," and its own predecessor, some of the biggest scares happen in broad daylight. Mexican nanny/housekeeper Martine feels evil spirits in the house, but after she's smoked out the house with her incense candles, Dan lets her go - big mistake. "Activity 2" isn't as organic as the first film. While the security camera angle is a good one, things fall down with video camera use. Why, for example, would Kristi be taping Katie for a private conversation in a bedroom? Why would Ali and her boyfriend Brad tape each other looking things up on a laptop? But the film delivers both suspense scares and that's what matters most. Even though much is repeated from the first film - the low hum that shouldn't be there, the interrupted television reception, doors opening and closing and the heavy thump, thump, thump of approaching foot(?) steps - they build to a real sense of dread. It's all rather like those unsettling sounds coming from the attic in "The Exorcist." What Ali finds in her research (she's a bit of a Micah stand-in, initially thinking being haunted would be 'cool') adds historical depth to the tale and what her dad does to save his family is shocking in that we know he has doomed them. The film ends with a wide open invitation to continue it. If they can make a third installment as good as the second, bring it on.