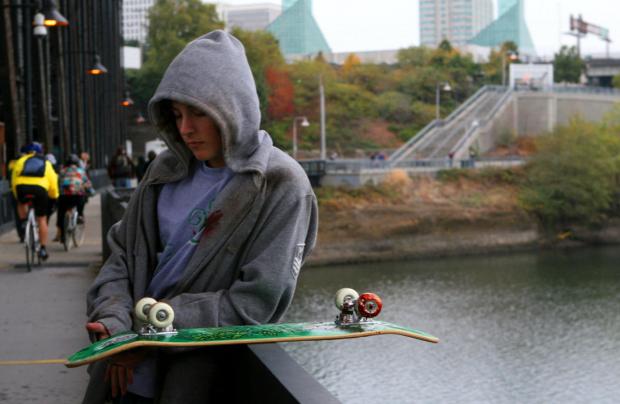 Alex (Gabe Nevins) is one of Portland’s tribe of skateboarders. He and his friend Jared (Jake Miller) gravitate to the place where the best ‘boarders congregate to ply their sport. But that decision will have dire consequences for Alex when a security guard is accidentally and gruesomely killed near “Paranoid Park.”

Alex (Gabe Nevins) is the older brother of a Portland home in the process of being split by divorce. He's happiest when on his skateboard and is beginning to tick off the girlfriend, Jennifer (Taylor Momsen, "Underdog," TV's "Gossip Girl"), who he is growing less and less enthusiastic about, by spending more and more time with Jared (Jake Miller). When Jared suggests the duo hit the local hardcore skateboarding scene, Alex demurs that he is not ready. But no one is ever ready for "Paranoid Park." After "Last Days," I was expecting "Paranoid Park" to be a lesser, second tier effort from writer/director Gus Van Sant, but instead find that this fourth entry in his impressionistic reveries on death to be the purest artistic achievement in his experimental mode of filmmaking. From his direction of non-professional actors (Nevins is terrific as the troubled dreamer) to his fractured storytelling and glorious images startlingly matched to unusual soundscapes (a crescendo of birdsong during a shower, for example, creates interior suspense, Van Sant's homage to "The Birds," perhaps), "Paranoid Park" is multi-layered and mesmerizing. Van Sant, adapting the Blake Nelson novel, begins his film with high speed photography depicting the bridge which separates the 'safe' areas Alex usually inhabits with the rougher, street park area, all set to cop thriller music which segues into carnival and the wind of fast-moving traffic. Grainy, dreamlike scenes of skateboarders give way to Alex heading towards a bench set amidst tall beach grass, then to the utter clarity of a composed shot of his bedroom, where wooden chair sits before wooden desk in a wood panelled room. A closeup reveals Alex titling a notebook with the words Paranoid Park. Alex is called out of class and heads towards an office (Billy Swan's "I Can Help") where he meets Detective Richard Lu (Daniel Liu, "Untraceable"), who tells Alex that he has spoken to his friend Jared about a night at Paranoid Park. Alex denies having been there, plans thwarted, and provides minute detail about the meal he got at a Subway. We learn that a security guard was killed on railroad tracks near the park and that a skateboard was probably involved. Alex roams back down the hallway to Elliott Smith's "White Lady Loves You More." A scene follows where Alex drops Jared off and orders two cheeseburgers and a chocolate shake from a drive-through window and we know he was lying to Detective Lu, that this is a flashback to the night in question. More flashbacks and flashforwards round out the horrific story of what happened that night, but they also serve to bring us under Alex's skin and into his thoughts, his alienation. Alex's girlfriend is pushing for sex, which he goes along with, but his behavior afterwards is passive/aggressive (the scene itself is brilliantly played out, Jennifer pulling Alex along an upstairs hallway where a series of pictures reveal her history from infancy to high school as her family shrieks outside, frolicking in the family pool). Alex breaks up with Jennifer, revealed to be an all-American cheerleader matching that blackly humorous moniker, in silence in a scene framed reminiscent of "Manhattan" (in fact, many of Van Sant's music choices at this part of the film sound like they came from a Woody Allen movie - Van Sant has used numerous Nino Rota selections from Fellini's "Juliet of the Spirits"). As his distress over his involvement in the death escalates, Alex's few communications tend to be lies - until, that is, school friend Macy (Lauren McKinney) detects a problem. Macy, as far as possible a type from Jennifer's preppie golden girl, obviously 'likes' Alex and has far more substance than his previous female friend and it is she who sets what we come to understand as the film's underlying storytelling structure in motion - Alex's purging of his guilt to paper. Van Sant's approach to the material reflects the inner, non-linear workings of the mind and during the course of "Paranoid Park" we really get to know what it feels like to be Alex. Cinematography by Christopher Doyle ("In the Mood for Love," "The Quiet American") and Rain Kathy Li ("Porte de Choisy" segment of "Paris, je t'aime") alternates from standard medium, tracking and two-shots and Alex's direct point of view (never more pointedly than when Jared picks him up and grills him on his new skateboard). Art Direction by John Pearson-Denning ("Elephant's" prop master) serves up the middle class backgrounds of Van Sant's protagonists and differentiates their world from that of Paranoid Park. Sound design is integral to the mix, sometimes most effective when dialogue is silenced. Gus Van Sant's next film, "Milk," promises to be a much more straightforward film, but this, along with "Jerry," "Elephant" and "Last Days" comprise the most distinct of Van Sant's voices. Van Sant has made films about troubled teenagers since his career began and "Paranoid Park" is a mini-masterpiece.

Paradise Now” is a well-crafted mix of the personal lives of its two protagonists, Said and Khaled, and the broader scoped socio-political situation taking place between Israel and the Palestinians living within its borders. One of the interesting things about the film is the deft handling, by director and co-writer Hany Abu-Assad (with Bero Beyer and Pierre Hodgson,) of the subjects of friendship and loyalty amidst the decades long struggle between the Palestinians and their Israeli rulers. There is little by way of graphic violence depicted during “Paradise Now” despite the ultra-violent nature of the fanatical Palestinian fringe that deems sacrifice and martyrdom as the key to forcing freedom from Israel. A bombing and gunfire are only heard in the distance and is treated as matter-of-fact by the people trying to eke out a living in a war zone. But this doesn’t diminish the gut-wrenching decision made by Said and Khaled to strap explosives around their waists, sneak into Tel Aviv and kill as many Israeli soldiers as possible – and themselves. As the two men, newly groomed and dressed in black suits, make their way across the no-man’s-land, they are separated, stranding Said, alone, to decide what he must do. Khaled, given the chance to live, desperately wants to find his best friend and save them both. Said has different plans and is resolved to complete his mission without his friend. Complicating things is Suha (Lubna Azabal), a pacifist activist, whom Said is attracted to despite his decision to be a martyr. It becomes a race against time as Khaled and Suha try to find Said and save him from himself. The personal relationship between these two lifelong friends is the focus of “Paradise Now” but full shrift is given to the broader social and political aspect of the Palestinian struggle for a state separate from Israel. This side of the story is handled without taking a fanatical tone and is shown as a simple reality. The best friends are the product of decades of fanatical training, willing to give their lives for the cause. Suha represents the human, pacifist side of the Palestinian issue, fostering nonviolence over martyrdom as the means of change. The two leads playing Said and Khaled, Kais Nashef and Ali Suliman, are convincing as friends and fanatics. Khaled is, outwardly, the more impassioned to fulfill his destiny and sacrifice his life. But, Said goes through the most dramatic change as he moves from passive acceptance of his fate to embracing the cause and is single-minded in the completion of his mission. Lubna Azabal, as Suha, is the voice of reason, pleading with Said to forsake the violent cause and work with her to find a peaceful, non-life taking means to accomplish Palestinian freedom. Paradise Now” is a minimalist production that efficiently tells its story without the benefit of a big budget. The actors in this tiny cast effectively portray the emotions and challenges of life in the Palestinian war zone. Things are not black and white but in varied shades of gray as Khaled is spared from his mission by circumstance while Said’s resolve is fortified, even enhanced, when separated from his best friend. Suha, too, gives nuance to the pacifist side of the Palestinian issue, introducing a Gandhi-like attitude to effect change in their homeland. Hany Abu-Assad takes the broad political situation of Palestinian self-rule and terrorism as a tool to that end and brings it to a personal level. You understand how the best friends, immersed for years in the fanatical, hate-Israel environment, can blithely prepare for their own demise. The filmmakers balance this deadly zeal with the life-affirming practicality of the pacifism introduced by Suha. The subtle manner in dealing with the complicated issues makes “Paradise Now” a unique and intriguing work.