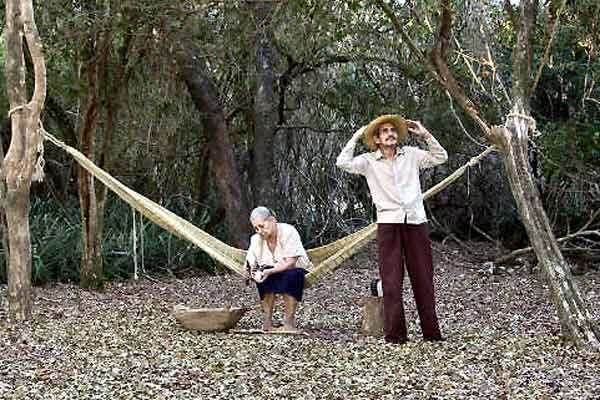 An aging couple, Ramon (Ramon Del Rio) and Candida (Georgina Genes), set up their hammock in a shady spot to keep cool from the oppressive heat. Their main topic of conversation is about their son, Masimo, who was drafted to fight in the long running war against Bolivia. Not knowing the fate of their only child, they sit and reminisce about the young man – is he alive or dead? - in director Paz Encina’s thoughtful and heart-wrenching debut, “Hamaca Paraguaya.”

In a truly unique personal drama, freshman helmer/scribe Encina tells a quiet, yet resonating, story that takes place over the course of a day during the end of the 1932-1935 Chaco War between Paraguay and Bolivia. Using long, static camera shots with an extraordinarily few edits (about 30 for the whole film) and voice over flashbacks, we hear the couple, whose faces are never seen in frontal close up, discuss their mundane lives and the sorrow and fear of possibly losing their only son. A film shot with an almost immobile camera and many minutes long shots about an old couple lamenting their son’s fate may not sound like much of anything. But, Paz Encina deftly tells their simple story in an effective, mesmerizing style that makes you hang on to every word spoken as your eyes are transfixed by the film’s simple, but painterly, composed imagery. It is like a series of art works languidly strung together, telling a simple day-in-the-life story of an old couple, with riveting, poignant dialog. The discourse shifts between the couple’s routine day-to-day conversations and that of their missing son, in flashback voiceovers, as Masimo tells them of his fears of dying in the war. These are melancholy moments between mother and son that bursts with emotion. Ramon gets shrift, too, as he seeks the help of local political boss, Don Jacito, in finding out about Masimo’ fate. The don gives Ramon a glimmer of hope when he tells the farmer that the war is officially over but has no word on his son. Another simple, yet intriguing, aspect of the film has Masimo’s dog, left behind by his master in the care of Ramon and Candida, barking plaintively in the background. Candida complains about the constant cacophony – but, worries and frets whenever the pooch stops barking. All the time, there is the rumble of distant thunder and farrmer Ramon keeps looking to the sky for the promised rain the clouds must surely bear. Hamaca Paraguaya” leaves you with several questions. Is the dog OK? Will the hoped for rains finally come? What of Masimo? That such a simple film makes you want the answers tells of the talent of new filmmaker, Paz Encina. The subtle elegance of the film’s lensing, by Willi Behnisch., art direction (Carlos Sapatuza) and, yes, editing (with less being proved more by Miguel Sverdfinger) make this minimalist, quietly told story a must for anyone who consider themselves a true film buff.