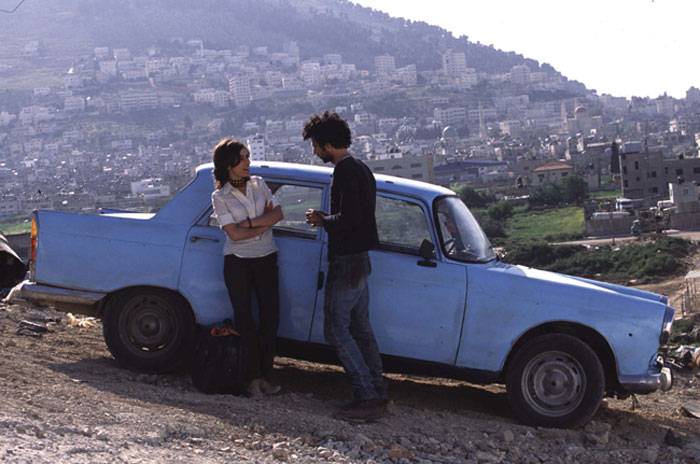 Said (Kais Nashef) and Khaled (Ali Suliman) have been best friends since childhood and work as lowly mechanics in a Palestinian West Bank town. They are devout Muslims and have vowed to martyr themselves, together, for the cause of freedom, a vow that is called upon by their charismatic leader, Abu-Karem (Ashraf Barhom). Now, they must prepare themselves for the ultimate sacrifice - their lives for the cause - in “Paradise Now.”

Life-long friends Said (Kais Nashef) and Khaled (Ali Suliman, "The Syrian Bride") work as auto mechanics in their Palestinian hometown of Nablus. When Khaled's fired, the two sit on a hillside overlooking the town, smoke a water pipe and listen to a cassette tape Said has taken from the car of Suha (Lubna Azabal, "Almost Peaceful," "Les Temps qui changent"), the foreign born and educated daughter of a Palestinian martyr he has struck up a flirtation with. On the way home, Said is waylaid by Jamal (Amer Hlehel) to tell him he and Khaled's wish has come true - they have been chosen for a suicide bombing attack in Tel Aviv. Their next day will be "Paradise Now." Writer/director Hany Abu-Assad ("Ford Transit," "Rana's Wedding") had to surreptitiously maintain good relations with both the Israelis and local Palestinian groups while filming on location in Nablus - at one point, he even had to appeal directly to Yasser Arafat to get his kidnapped location manager back. He maintains a similar balance on the subject of suicide bombing within his film, but although Palestine's entry for the 2005 Foreign Film Language Oscar clearly paints Israel as the conflict's oppressor, the film's humanism shines through emotionally, empathetically and with surprising doses of humor. Jamal informs Said that he will stay with him until he departs for his mission, apparently both to secure the operation and support its agent. He listens nervously in the next room as Said asks his mother (Hiam Abbass, "Satin rouge") to tell him about his father. Clearly Said is still probing his decision. Said manages nonetheless to slip away in the middle of the night to visit Suha, who is perplexed by the timing of his presence yet still welcomes it. She tries to engage him in a conversation about films, describing him as like a 'Japanese minimalist film.' When Said is reunited with Khaled the next day, his friend appears to have no doubts about carrying through assignment. They are ritualistically prepared (in a Scorcese-worthy montage a man with no hands assembles their explosives as they are shaved, bathed and suited like corpses for a wake before gathering with their colleagues for a final repast depicted like da Vinci's Last Supper), then driven to a fenced border, but when they climb through an opening they're startled by an Israeli helicopter. Said and Khaled are separated. With their leader suspecting Said of betrayal, Khaled sets out to find him and complete their mission, but both men have experiences which shift their mindsets. Kais Nashef is the central figure of "Paradise Now" and the actor walks a line between letting us into his thoughts and remaining a mystery. He can appear rather stoic, yet also shows sensitivity in his interactions with Suha and his mother. Ali Suliman makes a terrific foil, as open as Nashef is brooding. It is Suliman who brings comic elements into the film, staring down a tea boy waiting for a tip or advising his mother where to buy water filters in the midst of his taped martyr video. Lubna Azabal represents both an outsider and insider, the daughter of a famous martyr yet one educated in Europe. She gives a quizzical and passionate performance. Hiam Abbass represents the home and projects quiet grace. Both women have a similar arc, gradually realizing what Said has not told them. Amer Hlehel unnerves with the jittery execution of his assignment, hinting that the means to his end is a higher objective than the emotional support of his charge. Abu-Assad does a terrific job both laying the groundwork for understanding the motivation of suicide bombers and making arguments against their acts. He also takes a level-headed pro-Palestinian stance with Said's argument that world view holds Israelis as victims which is at odds with their roles as occupiers. One of the film's most urgent scenes is Suha's horror in learning that both martyr tapes and the tapes of collaborators' executions may be rented or purchased (the store clerk genially offers that he could get more for the executions, but that it would be a logistical nightmare to separate the two). In an early scene, Abu-Assad disorients us with a transition into a photography studio. Said stands before a pastoral backdrop, but the echo of indoor footsteps jars. Is this an evocation of Said's paradise, something imagined as splendid which is in fact hollow and unreal? The film's one drawback is a muddled transition when Said and Khaled are split. It is unclear what Said's thought processes are as he integrates himself into Israeli society before eventually returning through the fence and Khaled's agitated insistence on finding Said himself implicates a dire alternative we are never privy to. Still, "Paradise Now" works on so many levels. It is a truly thought-provoking work, cinematically satisfying as it calls out for understanding.

Paradise Now” is a well-crafted mix of the personal lives of its two protagonists, Said and Khaled, and the broader scoped socio-political situation taking place between Israel and the Palestinians living within its borders. One of the interesting things about the film is the deft handling, by director and co-writer Hany Abu-Assad (with Bero Beyer and Pierre Hodgson,) of the subjects of friendship and loyalty amidst the decades long struggle between the Palestinians and their Israeli rulers. There is little by way of graphic violence depicted during “Paradise Now” despite the ultra-violent nature of the fanatical Palestinian fringe that deems sacrifice and martyrdom as the key to forcing freedom from Israel. A bombing and gunfire are only heard in the distance and is treated as matter-of-fact by the people trying to eke out a living in a war zone. But this doesn’t diminish the gut-wrenching decision made by Said and Khaled to strap explosives around their waists, sneak into Tel Aviv and kill as many Israeli soldiers as possible – and themselves. As the two men, newly groomed and dressed in black suits, make their way across the no-man’s-land, they are separated, stranding Said, alone, to decide what he must do. Khaled, given the chance to live, desperately wants to find his best friend and save them both. Said has different plans and is resolved to complete his mission without his friend. Complicating things is Suha (Lubna Azabal), a pacifist activist, whom Said is attracted to despite his decision to be a martyr. It becomes a race against time as Khaled and Suha try to find Said and save him from himself. The personal relationship between these two lifelong friends is the focus of “Paradise Now” but full shrift is given to the broader social and political aspect of the Palestinian struggle for a state separate from Israel. This side of the story is handled without taking a fanatical tone and is shown as a simple reality. The best friends are the product of decades of fanatical training, willing to give their lives for the cause. Suha represents the human, pacifist side of the Palestinian issue, fostering nonviolence over martyrdom as the means of change. The two leads playing Said and Khaled, Kais Nashef and Ali Suliman, are convincing as friends and fanatics. Khaled is, outwardly, the more impassioned to fulfill his destiny and sacrifice his life. But, Said goes through the most dramatic change as he moves from passive acceptance of his fate to embracing the cause and is single-minded in the completion of his mission. Lubna Azabal, as Suha, is the voice of reason, pleading with Said to forsake the violent cause and work with her to find a peaceful, non-life taking means to accomplish Palestinian freedom. Paradise Now” is a minimalist production that efficiently tells its story without the benefit of a big budget. The actors in this tiny cast effectively portray the emotions and challenges of life in the Palestinian war zone. Things are not black and white but in varied shades of gray as Khaled is spared from his mission by circumstance while Said’s resolve is fortified, even enhanced, when separated from his best friend. Suha, too, gives nuance to the pacifist side of the Palestinian issue, introducing a Gandhi-like attitude to effect change in their homeland. Hany Abu-Assad takes the broad political situation of Palestinian self-rule and terrorism as a tool to that end and brings it to a personal level. You understand how the best friends, immersed for years in the fanatical, hate-Israel environment, can blithely prepare for their own demise. The filmmakers balance this deadly zeal with the life-affirming practicality of the pacifism introduced by Suha. The subtle manner in dealing with the complicated issues makes “Paradise Now” a unique and intriguing work.