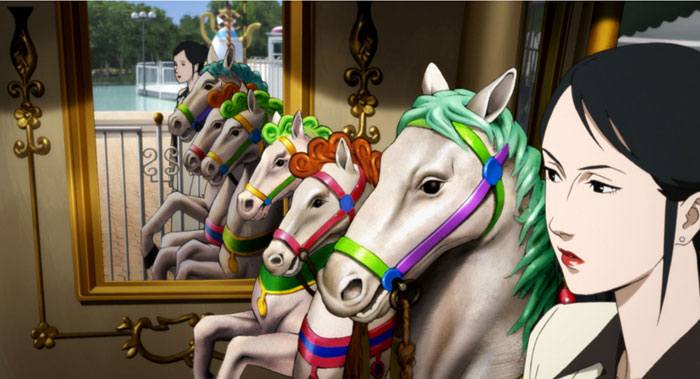 Brilliant psychologist Atsuko Chiba (voice of Megumi Hayashibara) uses newly advanced technology to burrow into the dreams of her patients. She also uses her access to the high tech equipment, called the DC Mini, as a dream detective. Her company fell victim to a thief who steals three of the Minis and she must recover the gear to stop an unexpected wave of psychological terror in “Paprika.”

When the shipload of new prisoners arrive at their new “home,” Warden Barrot (Yorick van Wageningen) tells them, “Feel free to try to escape.” Then he lays down the punishment. The first escape attempt earns two years in solitary confinement. The second garners five years and murder gets the guillotine. Early on, Papillon meets Louis Degas (Rami Malek), a high-class forger who bilked millions in fake bonds, convicted and sent to the Island. Word is out that Louis has hidden money and, after proving his worth, Papi makes a deal: if Louis finances his escape, he will protect him from those who want Louis’s stash of cash. This is the beginning of a beautiful partnership and friendship. I have to say, I loved the 1973 adaptation of Charriere’s autobiographic “novel” – which I read back in the day – by director Franklin J Schaffner and starring Steve McQueen as the hero, Papillon, and Dustin Hoffman as the vulnerable Louis Degas. That film has stayed with me, and viewed many times since its release decades ago, so I was skeptical about a remake. That said, I have been doing this for so long I can leave my opinions behind (usually) and try to critique a film, even a remake, on its own merits. Director Michael Noer and scripter Aaron Guzikowski take the source book and 1973 script (by Dalton Trumbo and Lorenzo Semple Jr.) and craft the story and its characters to make the story their own. We meet Henri following a heist where he stole a cache of diamonds for his gangster boss. He takes the liberty of giving an expensive necklace from the robbery to his girlfriend, Nenette (Eve Hewson). His disloyalty earned him the frame-up by the corrupt courts and a life at hard labor in one of the most forbidding places on earth. This up front depiction of what led Henri to his current predicament helps to humanize the character and allow Hunnam to give him dimension. While Charlie Hunnam gives a first rate performance (and, through camera angles and light, occasionally brings out McQueen from the original), Rami Malek is remarkable as Louis Degas. He does not try to recreate Dustin Hoffman’s Louis but makes the character his own with the vulnerability, intellect and, in the end, loyalty and friendship. The filmmakers give a straightforward telling of Charriere’s epic adventure and capture the heart and soul of his story of innocence and fight for freedom. The harrowing life Henri and the inmates of the horrific prison must endure to survive their confinement is shown with effective impact, both visually and viscerally. Going in, I had my doubts about this remake of a favorite classic. But the filmmakers, cast and crew do a solid job in telling a well-crafted true-life tale of one man’s quest for freedom.