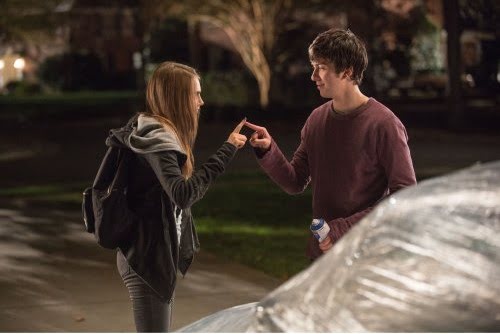 Quentin (Nat Wolff) has harbored a crush on the girl next door, Margot (Cara Delevingne), since her family moved in when he was just a kid. Margo has followed her quest for adventure and solving mysteries while Quentin chose the safe route, mapping out his entire life in advance. That changes when she shows up unannounced one night to take him on her mission, then she disappears, in “Paper Towns.”

Since he was 9 years old, Quentin (Nat Wolff, "Palo Alto," "The Fault in Our Stars") has been besotted with Margo Roth Spiegelman (model Cara Delevingne), the girl who moved in across the street who became his friend. Now a high school senior, 'Q' isn't part of the cool crowd that Margo runs with, but when she discovers her boyfriend Jase (Griffin Freeman) is cheating with one of her best friends, Margo enlists 'Q' for an evening of risky revenge before disappearing, leaving him to decipher her clues as to where she's gone in "Paper Towns." The second John Green novel to be adapted by "The Fault in Our Stars'" screenwriters Scott Neustadt & Michael H. Weber has a couple of solid themes (taking risks, learning to look beyond initial and public perceptions), but this time around the YA material is weighted down by too much contrivance and leads who are frankly uninteresting. What it does have are supporting roles that enable many young newcomers - Austin Abrams ("The Kings of Summer", Justice Smith, Halston Sage ("Neighbors") and Jaz Sinclair - to shine. "Robot & Frank" director Jake Schreier stages the dual adventures and quieter moments with visual flair, but fails to smooth out the story's less than convincing elements. Quentin is on a straight path towards medical school, so when Margo appears at his window late one night, demanding he provide his mother's car and act as driver, he's both thrilled and unsettled. He goes along, but each step of the way he's worrying about getting into trouble or, worse, ending up in jail. But Margo's weird big box shopping spree, followed by break-ins and vandalism (including spray painting her signature 'M' to mark her work), set his heart pumping. After telling him he's a lot cuter when he acts confident as they view Orlando from atop the Sun Trust building, Quentin thinks his relationship status is about to change. But Margo fails to appear at school the next day. And the day after. A couple of days later, her parents appear at his house looking for information, resigned to the fact that she's 'run away again.' So Quentin takes it upon himself to figure out the mystery with his buddies Ben (Abrams) and Radar (Smith), beginning by bribing Margo's younger sister to let them into her room. Stacks of LPs and a copy of Walt Whitman's 'Leaves of Grass' get him started, leading to a note in his bedroom door jamb with the address of an old, abandoned souvenir shop. He becomes convinced she's gone to Algoe, NY, one of the paper towns she's told him about (a term used by mapmakers who put invented towns on their maps to ensure copyright protection) and he convinces his friends, including Margo's own misjudged bestie Lacey (Sage), to set off on a 1,200 mile road trip as long as he can get them back in time for prom. The film's full of quirks, like the Black Santa collection which has so taken over Radar's house he's been too embarrassed to let his girlfriend Angela (Sinclair) come over, not to mention its own titular concept (one imagines Green learned of the phrase then retrofitted an entire novel around it). But it implies acceptance of some pretty extreme behavior, not the least of which is high schoolers setting out on their own with no parental backlash. "Paper Towns" at least dares to be different, but its intriguing elements never gel into a satisfying whole. The film's supposedly revelatory climax is a let down, its epilogue more successful due, once again, to those supporting players. Grade:

This is the second film adaptation of a novel by John Green – the first, “The Fault In Our Stars (2014),” is a YA story about two young cancer survivors who fall in love. “Paper Towns,” which Green published in 2008, four years before “Fault’s” release, is a radical departure from the near treacle earlier film. Here the author and filmmakers put together a mystery, of sorts, that is not really mysterious. Sophomore helmer Jake Shreier (his first was the offbeat buddy movie “Robot & Frank (2012)”) starts off with Quentin’s unrequited love crush with Margo. Knowing that she is an adventurer and he is not, they grow apart over the years – that is, until that nighttime visit and Margo’s disappearance. This is where “Paper Towns” tries to be a mystery. With Margo gone, Quentin begins to find clues that she left behind to point to where she is going. His friends Radar (Justice Smith)) and Ben (Austin Abrams), along with Radar’s girlfriend, Angela (Jaz Sinclair), and Margo’s former best friend Lacey (Halston Sage), convince him, after he figures out her whereabouts – some 1200 miles away. They all pile into Quentin’s soccer mom van and head off to find Margo. To make things tenser, the BIG PROM is just days away, so the clock is ticking. “Paper Towns” is a case where the supporting characters are more likable than the two young leads. Quentin, as played by Nat Wolff, is a nebbish who has no life of his own, just plans. As such, it is Ben and Radar who steal the show, especially Ben’s inappropriate asides about how hot Quentin’s mom (Cara Buono) is. When Quentin’s posse is out of the picture and Margo comes in, the fun went away. Cara Delevingne plays Margo far too smug to be at all likable – and, she is malicious and hurtful, another strike against the character. The YA book and film craze, like anything that is overexposed, is reaching a saturation point where good films will get lost among the mediocre.