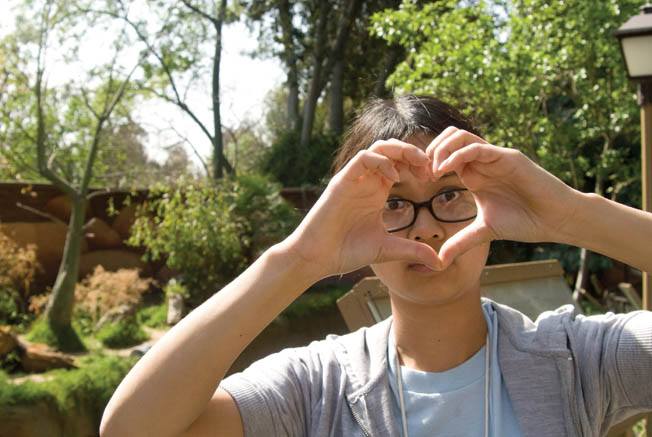 Film school student Charlene Yi is smart and artistic but there is one thing she does not get: love. Documaker and co-writer (with Yi) Nicolas Jasenovec, with camera in hand, follows the young woman on a trek across the US to interview people from all walks of life in a quest to find the meaning of that elusive emotion in “Paper Heart.”

Offbeat standup comic Charlyne Yi ("Knocked Up," "Semi-Pro") claims to not believe in the concept of romantic love, at least not as every portrayed by Hollywood. Director Nicholas Jasenovec thought this was yet another odd bit of of his friend 'Chuck's' makeup and so the two decided to travel around the country investigating what love is in "Paper Heart." Chipmunk-cheeked tomboy Yi is a strange character with odd tastes, a desire to 'be one of the guys,' and an infectious laugh. She's got an awkward but likable quality that makes her a different onscreen interviewer that we're used to, yet she gets interesting stories from everyone she meets, be it a professor discussing pheromones, a Las Vegas Elvis impersonator, a bar full of bikers or senior couple married since their high school sweetheart years. Bopping around with her cowriter/director/pal Nick (played in the film by actor Jake M. Johnson, an unexplained choice that stretches the definition of documentary), Yi occasionally diverts from reality footage to her own visualization of the stories she is hearing - charming low-tech marionette tableaux that Jasenovec films to allow Yi's involvement with the animation to be seen. As with some of the best documentaries, something unexpected (unscripted?) happens when Chuck and Nick go to an L.A. party. Michael Cera ("Superbad," "Year One") arrives and has an immediate and palpable interest in Charlyne. Their courtship is quirky and sweet - and all captured by Nick's camera. Eventually, Charlyne's stubborn resistance to admitting feelings of love and the documentary cameras drive a wedge into the relationship and Nick's plan for a romantic climax in Paris comes down to earth with a thud. Bud will an unplanned trip to Cera's home town of Toronto change things? "Paper Heart" is unique, a rarity these days, and one of those films that should have you smiling when you're not laughing out loud. While Yi isn't your typical Hollywood glam girl, it's easy to see why Cera wants to be with her. But Cera isn't the only one tested by Charlyne's stubborn attitude - it's as if she has begun her film with an agenda and is resistant to change it, no matter how obvious her feelings are to everyone else. If you weren't already charmed by the low key Canadian, "Paper Heart" should cement regard for Cera, who comes across as premium grade A boyfriend/husband material. He's a sweetheart, and we cannot help empathize with his frustration with dating a reality documentary subject who doesn't believe in love. The longer the film goes on, the more Yi loses our sympathy. In addition to the oddness of casting the 'character' of Nick, we are never given any indication whatsoever as to why certain locations and people are chosen to be interviewed. From L.A. to Lubbock for a university professor? To Georgia for a playground of children (who epitomize the phrase 'out of the mouths of babes') or New York City to talk to a gay couple? Still, overall the film is an upbeat crowd pleaser that should break Yi out of the L.A. underground comedy circuit. Another unique offshoot of the Yi/Cera romance is their original music, as delightful as those wonderful puppet shows.

When the film started, I felt an extremely negative vibe toward Charlene Yi as the filmmakers lay out the intent of “Paper Heart.” Her naiveté seemed false and she bland as Yi tells the camera how she has never felt love. However, as the journey unfolds, she visits such far-flung locales as Oklahoma City, Lubbock, LA, Las Vegas, New York City, Amarillo, Albuquerque, Little Rock, Atlanta, Palm Springs and Nashville. In each city, she interviews all manner of characters, including an Elvis impersonator ministering a marriage chapel in Vegas, a divorce court couple, a gay couple, kids, an older coupled married for decades and many others and asks the question: What is love? As Charlene, or “Chuck” as her friends call her, visits each town, she gets the definition of love. Unfortunately, for Chuck, everyone has a different opinion and she does not get the answer she is searching for so fervently. A chance encounter with actor Michael Cera, though, sows the seeds of doubt about her adamant stance on love. The on again, off again romance between Charlene and Michael melds nicely with the film’s main subject, the journey, and the two paths weave well together. Chuck and director Jasenovec also incorporate some charming marionette animations used to allow the young woman to open up, indirectly, to the viewer. Deep inside, she has found what she seeks. “Paper Heart” grew on me as the first time feature filmmakers, quite professionally, crossed the continent and collected a myriad of interviews and anecdotes about love. Chuck’s emotional blossoming has a nice, charming arc, too. By the end, I took a liking to the diminutive Charlene.