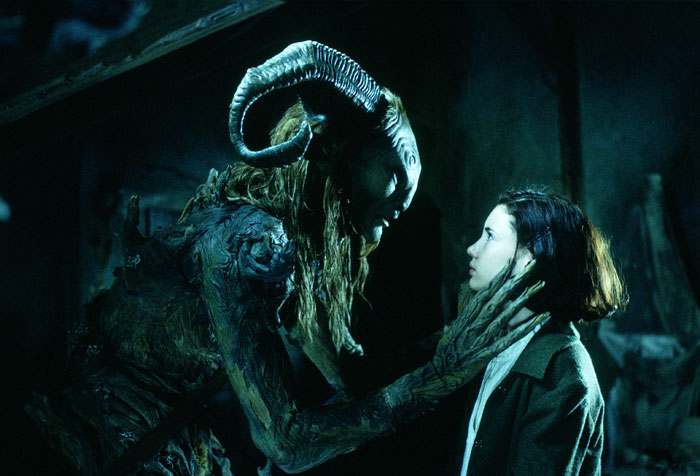 Following the Spanish Civil War, a young girl, Ofelia (Ivana Baquero), must entertain herself after her mother (Ariadna Gil) remarries and is made pregnant by a cruel military officer (Sergi Lopez). The youngster finds an elaborate stone labyrinth near her home to explore and discovers a mythical faun who convinces the girl that she is, in fact, the princess of an underground kingdom. To return to her rightful place in this magical world, though, she must complete three tasks in “Pan’s Labyrinth.”

Director Guillermo del Toro returns to the realm of fantasy that he had explored in his earlier works, Cronos” and “The Devil’s Backbone,” with his magical world of mystical creatures and lost legends. His creation, “Pan’s Labyrinth,” is a beautifully rendered fantasy tale that doesn’t quite hit the mark for me. Ofelia’s life takes a sinister turn when her mother, Carmen, marries sadistic Vidal, a high-ranking officer in Generalissimo Francisco Franco’s army assigned to crush a local guerilla uprising. The youngster explores the country around her new home and discovers the title underground maze. She meets Pan (Doug Jones), the faun who presides over the magic world, and is told that she is not human at all. She is, he says, the daughter of the King of the Moon and must face three dangerous tasks if she is to reclaim her kingdom. The young girl’s world is divided between the reality of her new life with her pregnant, bed-ridden mother and her sadistic stepfather and the fantastical world beneath the earth. Above ground, she is helped by Vidal’s housekeeper, Mercedes (Maribel Verdu), and doctor (Alex Angulo) who are secretly members of the rebel cause. Beneath, she is assisted by Pan and others to fulfill her three tasks though hindered by the terrifying figure of the Pale Man (also played by Doug Jones), whose all-seeing eyes are in the palms of his hands. Pan’s Labyrinth” is a stylish fantasy film that is about escape. Ofelia is thrust into the cruel world of her ruthless stepfather ordered to suppress leftist rebel attacks in the north of Spain. Her way out of this repressive environ is found with Pan and a myriad of other creatures inhabiting his underworld warren. The story moves between these distinct lands and Ofelia’s mission to restore balance to the Kingdom of the Moon. While I liked the style and striking dark beauty of Pan’s Labyrinth,” I could not wrap my arms around the fantasy tale by helmer del Toro. The acting is solid but the story is heavily weighted toward the reality of Franco’s fascist Spain and its repression of freedom. The symbolism of the land of Pan is an obvious device depicting Ofelia’s escape from the loss of her mother and the cruelty of her stepfather. Vidal is a more vicious monster than any she encounters below, even the creepy Pale Man, and this distinction is near simplistic. The film is more good looks than complex substance in its darkness and phantasmagoria. Guillermo del Toro is an assured filmmaking talent who runs with his own distinct vision that has appeal to fantasy fans. “Pan’s Labyrinth” is a finely crafted film of Ofelia’s two distinctive worlds where the humans can be the real monsters and the creatures beneath the earth showing humanity. The creative story of escape from reality should garner attention from the fantasy audiece. It requires more than a single viewing to get its points and that, to me, is what keeps it from attaining the stature of a great film. It is a good one, though, and