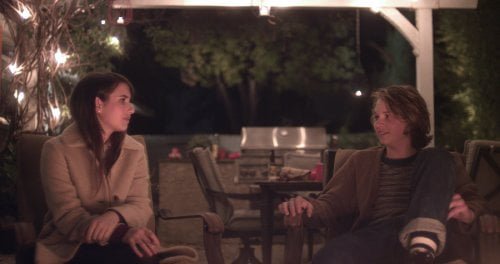 Writer/director Gia Coppola adds a new generational voice to the famous filmmaking family with this astute and assured debut. Taking several of the chapters from James Franco's short story collection and weaving them together, Coppola has painted a realistic picture of teenagers trying to navigate their way into adulthood. The film is beautifully acted, shot (cinematography by Autumn Durald, whose evening exteriors are stunning) and edited (Leo Scott, "Trash Humpers"), Coppola achieving a film that flows in story, visuals, sound and music as it gradually entwines April and Teddy's strands, knotting them together with a magical flourish. April is both part of the cool kids' circle and one apart. She hangs with Shauna (Claudia Levy) and Chrissy (Olivia Crocicchia, "Terri"), but Roberts let us know April doesn't share their values, especially when they begin to taunt Emily (Zoe Levin, "The Way Way Back"), a girl trying to connect through promiscuity. Meanwhile Fred, in his latest game of 'what if,' is surprised when Teddy answers that if he had an accident after drinking, he'd flee the scene. One party later, and Fred's game is proved portentous. Teddy finds himself enjoying the public service he's assigned in a children's library until Fred's destructive path crosses, but Teddy's artistic sensibilities are once again nourished at a senior center, where his compassionate portrait of a resident is deeply appreciated. Fred also crashes Teddy's art class with Mr. Wilson (SNL's Don Novello), who critiques his obvious wank of a painting with a parable about a man named Bob who reversed his way down a wrong tunnel. Fred mutters 'I'm not Bob." April gets a rude awakening about Mr. B.'s attentions when she sees him finessing another soccer girl whom Shauna and Chrissy assure her is 'very pretty.' Fred's manipulation of Emily's vulnerability blows up in his face, accelerating his journey down his road to nowhere. Coppola gets great work from her young cast. Roberts has never been this good, a tentative teen trying to fit in but not fall in. She's flushed and obviously flattered by Mr. B.'s attentions, yet typically awkward around the boy her own age who so wants her company. Jack Kilmer makes Teddy flawed yet lovable, the openness expressed in his face stumbling on its way to words (dad Val plays April's eccentric stepdad and the resemblance is notable). Wolff is becoming one to watch, his jittery energy contributing to a character who defines himself as a reckless bad boy, the actor investing Fred with a lost quality that keeps him likable even when he's doing awful things. Franco applies the shmarm charm to is predatory coach (an uncomfortable case of life imitating art given his recent online embarrassment with a 17 year-old girl). Levin is heart breaking until her Emily rallies and finds her self esteem, a cheer worthy moment. As Teddy's hit and run victim, Colleen Camp ("American Hustle") adds a dash of humor. "Palo Alto" joins the new breed of independent teen cinema, films like "The Spectacular Now" which ditch the John Hughes formula for more natural situations, but Gia Coppola's voice is all her own.