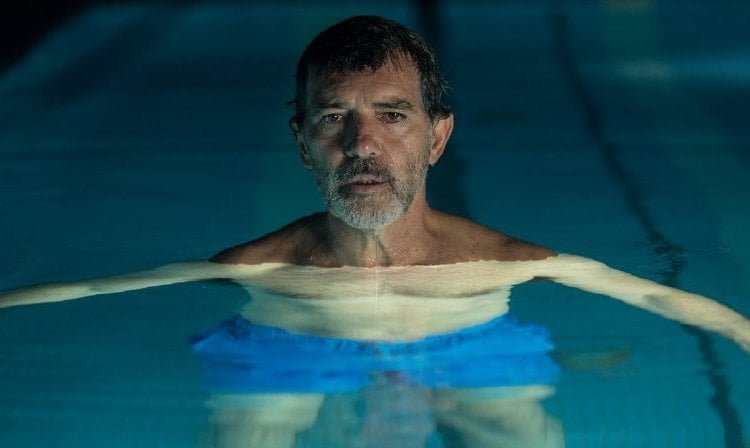 Film director Salvador Mallo (Antonio Banderas) has had a long and successful career but, now, later in his years, suffers both creative and health problems. And, he must attend the restoration and re-release of one his famous, earlier films and set free old demons in “Pain and Glory.”

Although Mercedes (Nora Navas) constantly urges him to attend some of the many events he is invited to, Spanish film director Salvador Mallo’s (Asier Flores, Antonio Banderas) suffering from headaches, back pain and a choking disorder has led him to retreat from life. But when Madrid’s Cinematheque calls upon him to present a restoration of his “Sabor” with the film’s star, Salva reaches out to actor Alberto Crespo (Asier Etxeandia) who he hasn’t spoken to in thirty-two years. Crespo’s heroin use invites Salva to experiment, eventually leading him back to his doctor, while the actor’s desire to produce one of his works on the stage opens other doors to Salva’s past. The filmmaker begins to find renewed inspiration in his life’s “Pain and Glory.”

This isn’t the first time writer/director Pedro Almodóvar has gone the autobiographical route in his filmmaking, but this may be the most moving, his 22nd full length theatrical feature carefully considered, deeply felt and vulnerably revealing. That Almodóvar is inviting us in is evident in his use of his own Madrid apartment as Mallo’s, the director clearly proud of his idiosyncratic interior design, oil paintings and objets d’art. Antonio Banderas, who has worked repeatedly with the director since his third film, “Labyrinth of Passion,” also gives us something special here, his physically acute and emotionally perceptive performance a career best. (Banderas, his hair spiked, his beard scruffy to resemble Almodóvar, won Best Actor at Cannes for this role. “All About My Mother’s” Celia Roth appears in a small but catalytic role at the film’s onset.)

In “Pain and Glory,” we learn about the director’s relationship with his beloved mother Jacinta (played in flash backs by Penélope Cruz and in the present by “Dark Habits’s” Julieta Serrano), who made a home out of a ‘cave’ and fought for her son’s education only to feel abandoned when his career took off. Crespo’s performance of his writing piece, ‘Addiction,’ about an intense relationship destroyed by heroin’s grip on his lover, unexpectedly brings Federico Delgado (Leonardo Sbaraglia, "Intacto," "Wild Tales") back into his life for a few revelatory hours. When he wakes up to the drug’s new hold on him, a 2 a.m. call to Mercedes results in a promising visit to his doctor and, feeling good again, Salva finally looks at her invite pile. A visit to a small local gallery foments another reunion, the miraculous find of a watercolor intended for him decades earlier. The depiction of him as a nine year-old boy on the back of a flour sack was painted by Eduardo (César Vicente), the local laborer he taught to read and who stunned him with his first feeling of sexual desire. If “Law of Desire” was the first of Almodóvar’s film to feature a director as its protagonist, this one sees one in his later years beginning to pen ‘The First Desire.’

Almodóvar’s transitions between the present and the past are elegant, floating through water or the highs of smoking horse. His impoverished beginnings are viewed through the glow of nostalgia, his mother’s love turning laundry day into a festive sing-a-long, their poor home transformed through barter with Eduardo. All of the brilliant, primary colors associated with Almodóvar’s oeuvre can be found in his well appointed apartment.

Just when we think we’re revisiting a flashback, Almodóvar surprises us, ending his film on a note of hope and grace. “Pain and Glory” is the work of a master at his peak.

This thoughtful, autobiographical rumination on the filmmaker’s life, both past, as a young Salvador, and in his present, dealing with the constant pain of sciatica, tendonitis, tinnitus, wheezing, headaches and sudden attacks of choking. His constant preoccupation with pain keeps him from letting his creative juices flow once again – the thing that his doctor says will help him more than painkillers.

The trigger that causes Salvador to begin making amends for his past comes from his agent, Mercedes (Nora Navas), who tells Salvador that he is to appear at the re-release of his film, “Sabor,” shot 30 years ago. Back then, after the film was finished, Salvador came down hard on his leading man, Alberto Crespo (Asier Etxeandia), and his performance, estranging the pair for those many years.

Salvador, at Mercedes insistence, locates his former star and asks Alberto join him at the presentation. The actor, Salvador finds out, has had a none too successful career since their forced parting, and has a heroin smoking habit to boot. Salvador does not say no when offered to smoke a bit of the smack – the very thing that caused the split with Alberto.

As adult Salvador deals with his past and present demons, he flashes back to his childhood and his strong willed mom, Jacinta (Penelope Cruz). The precocious nine-year old earns a scholarship to a seminary school, where Jacinta hopes he will become a priest. The equally strong willed Salvador adamantly declares he will not be a priest, forming his later rebellious self.

Young Salvador takes on the task of teaching an illiterate young man, Eduardo (Cesar Vincente), who is doing work for Jacinta, to read and write. Salvador’s student is also a budding artist and sketches Salvador while he reads. This plays out later in the film as Almodovar shows how Salvador’s youth influenced and formed his adult life in profound ways.

Pedro Almodovar, with “Pain and Glory,” brings us into his life and presents all the baggage he carried, both physically and emotionally, through that life and long career. Antonio Banderas, a longtime collaborator with the filmmaker, gives nuance to adult Salvador, making me root for the guy, and is a solid stand-in for the director. I give it an A-.