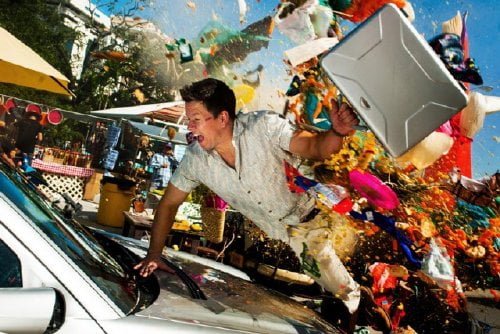 Daniel (Mark Wahlberg) and Adrian (Anthony Mackie) are bodybuilding buddies working as personal trainers at the Sun Gym near Miami Lakes, Florida. They are tired of struggling to make a buck and Daniel comes up with a plan: kidnap the very wealthy gym regular, deli-chain owner Victor Kershaw (Tony Shalhoub), and exhort a lot of money for his safe return. They hire ex-con Paul Doyle (Dwayne Johnson) to help with the snatch and torturing Victor to get him to sign off all of his assets, assigning them to the Sun Gym Gang, in “Pain & Gain.”

Daniel Lugo (Mark Wahlberg) believes in pumping up and the American dream. The former leads him to Miami's Sun Gym, where he gets a job managing from owner John Mese (Rob Corddry, "Warm Bodies") by promising to triple his membership in three months. The latter leads him to the get-rich-quick seminars of Johnny Wu (Ken Jeong, "The Hangover"), who preaches 'Be a Doer, not a Don'ter.' The twain are met when Lugo meets gym client Victor Kershaw (Tony Shalhoub, "Big Night," TV's 'Monk'), a Columbian Jew who brags about his houses, cars, businesses and offshore accounts. Lugo takes action, recruiting gym employee Adrian Doorbal (Anthony Mackie, "The Hurt Locker") and Born Again ex-con Paul Doyle (Dwayne Johnson) to kidnap Kershaw and defraud him of his assets in "Pain & Gain." Director Michael Bay ("Pearl Harbor," "Transformers") attempts a breather from his machine-gun edited, empty special effects extravaganzas with a true life story of bungling criminals played for comedy and, for a while at least, it works. Wahlberg is a master at playing brawny, aggressive cluelessness for laughs. We first meet him doing sit-ups punched through a Sun Gym billboard, shot in close-up by a mounted camera, just one of the visual tricks Bay employs in lieu of edit-via-blender. And could Bay be taking tips from the masters? His multiple voiceover character introductions seem ripped from "Goodfellas" by way of Looney Tunes. But "Pain & Gain" only sustains itself long enough for the lads to accomplish the first step of their plot before devolving into a morass of overload, dry stretches, Bay's predilection for cheap titillation and behavior too ugly for fun. Lugo's idea is to keep Kershaw in an abandoned dry cleaning warehouse (which Bay embellishes as secondary sex toy storage) and torture the man until he signs over his possessions. It's more fun getting there, as one kidnapping attempt after another (most hilariously with Johnson and Mackie dressed in colorful ninja costumes) goes awry. Documents finally signed, Lugo goes ballistic outside a bank when he learns they must be notarized. Time to pull notary public Mese into the scheme. Kershaw's disposal is as bungled as his kidnapping and he survives, but his tale is too crazy for Miami police to believe. He hires private eye Ed Du Bois (Ed Harris, "The Rock"), who advises him to take cover just as Lugo and his goons are wandering hospital corridors. Lugo moves into Kershaw's oceanfront mansion, fronting as a secret government operative. His stripper girlfriend Sorina (Bar Paly, "A Glimpse Inside the Mind of Charles Swan III") is ceded to Paul, who slides back into debauchery and debt. Meanwhile Doorbal, suffering from steroidal impotence, marries his nurse Ramona (Rebel Wilson, "Pitch Perfect") and blows his share on a house downpayment. Lugo's cronies need more cash and so another scheme is spun targeting Hungarian Lamborghini owner Frank Grin (Michael Rispoli, "Kick-Ass"). This time disposal is the only outcome. One must commend screenwriters Christopher Markus & Stephen McFeely ("Captain America: The First Avenger") for streamlining such a complex true story (you can read the source material here), but they haven't gone far enough and too much of the comedy revolves around didoes and bimbos. Bay also cannot hold onto his frenetic, comical tone with escalating, sickening violence displacing the amusing incompetence which carries it out. Johnson maintains the most sympathy, but he's fighting with an ill-defined character, one who takes pity on Kershaw, but throws pieces of other victims onto the barbie. Mackie, usually an astute actor, is almost complete lost here. Kudos to Wilson, who brings a lascivious wit to her character and to Emily Rutherfurd (TV's 'The New Adventures of Old Christine'), who in a small role as Du Bois' wife embodies purity with her baby blues, then winks. Bay goes all out with a visual style accentuating Miami neon and utilizing camera tricks from Dutch angles to comically analytical slo-mo. One would be stretching, though, to suppose Bay's use of HD digital was supposed to highlight his cast's physical imperfections. Composer Steve Jablonsky ("Transformers") supplies a driving score, but ultimately "Pain & Gain" goes over a cliff.

This dramedy by Michael Bay (a filmmaker I have never been fond of) is a true enigma. Who would have thought that a movie about torture – based on true events – could become a comedy. After seeing “Pain & Gain,” I checked out the 1999 Miami New Times News articles by Pete Collins to hear the details of the true life story. Bay and company adhere to the grisly interpretation of the factual events and show the lengths the steroid-pumped bodybuilders go to exhort their victim of all his assets – home, business, savings and retirement. Instead of being outright ha-ha funny, “Pain & Gain” pushes a more grimace-evoking humor. No punches are pulled on the portrayal of the various tortures the trio use on Kershaw and the unsuccessful attempts to murder him. The tortures and the homicidal attempt closely parallel true life. This gives the filmmakers literary license to make the telling of the story darkly comical. Mark Wahlberg is the leader of the ensemble cast but there are several well-dimensioned performances, including Dwayne Johnson as conflicted and born-again ex-con Paul, Ed Harris as private eye Ed Du Bois hired by Kershaw, Tony Shalhoub as the pissed off torture victim and Rebel Wilson as the ED therapist who helps correct the steroid-induced, erectile disordered Adrian and later becomes his wife. Generally, I abhor Michael Bay movies and outright refused to see any of his “Transformers” franchise after the first one. It is refreshing to see Michael Bay make a film that has grounded story instead of a special F/X extravaganza. Who knows, I may be looking forward to the next time he makes a “film” instead of a “movie.” Because of Wahlberg and Dwayne Johnson, I willingly went to see “Pain & Gain” and was not disappointed, not something I normally say about Bay movies.