Page One: Inside the New York Times 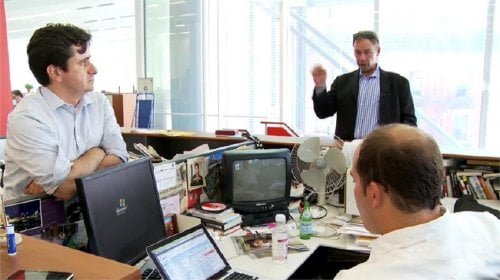 As one print journalist after another loses his job and the biggest city newspapers fight for survival in an online world, there is one that is considered 'too big to fail.' Using investigative reporter David Carr as his guide, cowriter (with Kate Novack, "Eat This New York")/director Andrew Rossi ("Le Cirque: A Table in Heaven") gives us "Page One: Inside the New York Times." If Rossi's done nothing else, he's turned charismatic veteran journalist and memoirist David Carr into a breakout star. If anyone can argue for the place of ink press reporting, it's Carr, and his craggy, jowly, hangdog face and gravelly voice just helps make that argument entertaining as hell. But one of Carr's main observations is left unexplored from a business model perspective and the fast-changing world of media has already made a couple of aspects of "Page One" obsolete (like frequent subject, editor Bill Keller, being replaced in May by Jill Abramson, to guide the paper into the digital age, or mentions of the pre-AOL Huffington Post). Rossi gives us history - he opens with the WikiLeaks story and all the controversy that ensues, a great way to segue to the days of Daniel Ellsberg and the Pentagon Papers. Of course the Times were involved in both, but my how the battle lines have shifted. Where Ellsberg needed the Times, Julian Assange's group simply self-published the footage they got of journalists being killed by U.S. Troops in Iraq on youtube and when the WikiLeaks onslaught continued, the Times acted like a filter. But they also put their investigative hat on - in 2008, the NYT created a Media Desk and there was something to say about one version of that youtube video, edited in such a way as to slant the story. We also hear about how unprepared the newspaper industry was for the rapidity of the collapse of print advertising and the bumpy road to create an online presence that demanded payment of an audience used to free content. Carr's disdain for news aggregators who simply bundle the work of papers like the Times is beautifully expressed on a panel run by Vice Magazine, one of said who prove too big for their britches when challenging the Times. We see how the speed of today's news getting to market is countered by the vets who vet their stories when an unsubstantiated report of the Pentagon pulling troops is wrongly reported by major television outlets. Carr wonders how a bunch of bloggers talking to each other can ever replace a war correspondent. And yet the Times hired a self-made blogger, Brian Seltzer, who eventually wears down Carr's aversion to Twitter. Still, although Rossi spends a small amount of time with ProPublica, a not for profit investigative newsroom which occasionally teams up with the majors, he doesn't do a great job explaining their financial model, nor dig further into ways papers like the Times could profit from the aggregators. The documentary is a modern take on the typical, a combination of archival footage, fly-on-the-wall observation and interview broken up with stills, cutaways to the actual mechanics of producing the paper and other jazzy notes to keep it visually interesting. The film could just as easily have used Carr as its subject, which was reportedly Rossi's original intent, as he is the filmmaker's most prized element here. The New York Times is an American institution, not without its own black marks (think plagiarist Jayson Blair and Judith Miller's WMD reporting, both outlined here), but still the country's most respected news source. But can respect keep it afloat? Rossi isn't the only one without an answer.