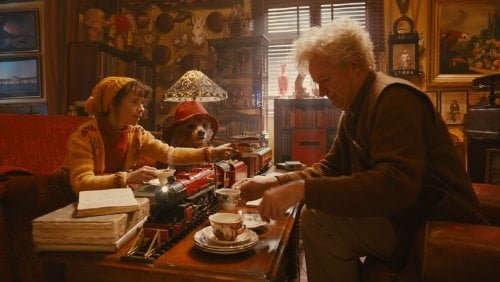 The great explorer Montgomery Clyde (Tim Downie) travelled to the deepest, darkest corner of Peru and discovered a unique specie of bear – bears that can talk! Now, years later, the rainforest is dwindling fast and one young bear, with the blessing of his beloved Aunt Lucy (Imelda Staunton), heads off to London with a tag that says “Please look after this bear. Thank you.” The city, though, is a cold, harsh place for the bear that will be named “Paddington.”

Just as Geographer's Guild explorer Montgomery Clyde (Tim Downie, "The King's Speech") is about to bag a bear specimen in the deepest, darkest jungles of Peru, he's stopped by the bear's guardian who also saves him from the scorpion dangling from his lapel. Astonished to discover these bears speak, he introduces them to the joys of marmalade and tells them they'll always be welcome in London. But years later, when the littlest is sent there with a note round his neck, there is only one kind soul, Mrs. Brown (Sally Hawkins, "Blue Jasmine"), who's willing to take him in and names him after the station where he was found, "Paddington." First we learned that Colin Firth had been replaced as the voice of Paddington, then The Weinstein Company moved the movie off its Christmas Day release date to mid-January, neither a very good sign, so what a thoroughly delightful surprise cowriter (with Hamish McColl, "Mr. Bean's Holiday")/director Paul King's ("Bunny and the Bull") adaptation of the much loved childrens books turns out to be. With quirky British humor, inventive production design, a terrific turn from Hawkins and even an 'in-house' 5-piece Calypso band, "Paddington" makes January film-going a whole lot brighter. That opening segment is shown in old b&w newsreel footage style, which immediately lets us know that this is a movie that's been made every bit as much for adults as for children (Pixar's "Up" comes to mind). After Clyde leaves, Paddington's Aunt Lucy (voice of Imelda Staunton) and Uncle Pastuzo (voice of Michael Gambon) become obsessed with producing marmalade, which they do with an elaborate pedal-controlled device. London and its language have become a fantastic dream, Paddington often looking at the snow globe Monty left behind. When tragedy strikes and Aunt Lucy decides it's time for a retirement home, the infamous 'Please look after this bear. Thank you.' note is tied around his neck and, attired in a blue duffel coat and his Uncle's red Peruvian hat (under which an emergency marmalade sandwich is always stored), the little guy stows away. Even once he's finally rescued by Mrs. Brown, who's determined to locate Clyde, Paddington's reception is less than welcoming. Mr. Brown ('Downton Abbey's' Hugh Bonneville), a risk analyst, isn't at all thrilled with the idea, insisting it's for one night only (his immediate attempt to add a rider to his home insurance proves prescient), and Judy (Madeleine Harris), the family teenager, is embarrassed to be seen with him (at least until he flies by her school windows in an unwitting citizen's arrest pursuit, one of his many well-meaning but poorly executed adventures). But there is one person in London who's extremely interested in finding the little bear, the manipulative and evil taxidermist Millicent (Nicole Kidman). This is a movie rich in its details. Where Millicent wants to stuff the bear and encase him in the Natural History Museum, Paddington spends time in the Browns's attic reflecting on their lives within a multi-story dollhouse diorama. His interpretation of the Browns's bathroom toiletries is delightful (a shot of the bear's CGI face underwater in a toilet breath-takingly realistic looking). Mr. Gruber's (Jim Broadbent, "Le Week-End") antiquities shop is a world unto itself, a magical place where tea is served via electric train set. Millicent's entry into the Brown home is staged as elaborately as a "Mission Impossible" stunt. The British penchant for men dressing as women gets a humorous workout when the (newly radicalized) Mr. Brown and Paddington gain illicit access to the Geographers' Guild, where communication occurs via pneumatic tube. And that Calypso band, whose music lends another offbeat note, shows up occasionally in the oddest places. The cast is more than game, Ben Whishaw's odd inflections just right for the foreign bear. Sally Hawkins is positively endearing as the bear's guardian (and "Dark Knight" costumer Lindy Hemming goes to town with her character's bright tights and contrasting shoes). Hugh Bonneville has a fun arc from stuffed shirt to action hero, his initial starchiness attributed to the responsibilities of fatherhood. Julie Walters ("Harry Potter") adds additional whimsy as the Browns's distantly related housekeeper, fastidious but more than up for adventure. Nicole Kidman hasn't been this much fun in ages. If the film has a failing at all, it's in underutilizing the talents of Peter Capaldi ("In the Loop," TV's 'Doctor Who') as Mr. Curry, the Browns's nosy neighbor and inadvertent kidnapping abetter. British television vets Matt Lucas ('Little Britain,' "Bridesmaids") and Geoffrey Palmer ('As Time Goes By') cameo as a taxi driver and the head of the Geographers' Guild. "Paddington" is everything one could ask for in a family film, and more. Color me charmed. Grade:

I was too old by the time the Paddington Bear books crossed the Atlantic to find a whole new readership with American kids, so I am not all that familiar, except on a most cursory level, with the iconic talking bear. I went into “Paddington” without much of a clue about his stories and misadventures. It did not matter, though. I had a ball. When Paddington loses his Uncle Pastuzo (Michael Gambon) during an earthquake, Aunt Lucy announces that she is moving to Lima to the Home for Retired Bears. The bears’ encounter with explorer Clyde, years ago, reminds them that, in London, a young bear will be taken care of. With his characteristic floppy hat and suitcase filled with jars of marmalade (Peruvian bears LOVE orange marmalade), the youngster stows away in a lifeboat on a cruise ship destined for London. He survives the journey well enough but when he ends up at London’s Paddington station, no one cares for the bear. Enter: the Brown family. Suspicious and overly protective Brown-family patriarch, Henry (Hugh Bonneville), wants nothing to do with the scruffy bear. (Of course, no one seems to notice that the bear can talk.) Kind-hearted mom, Mary, has a different idea and takes the bear, who she names Paddington, home with them until they can sort things out. The accident prone bruin will wreak havoc on the Brown household but will also have a cathartic effect on dour Henry and the Brown kids, Jonathan (Samuel Joslin) and Judy (Madeleine Harris). Director/co-scribe Paul King, with Hamish McColl, adapts Michael Bond’s popular stories and embellishes on them with the introduction of Millicent, the director and chief taxidermist for the Museum of Natural History. When she learns of the presence of the rare Peruvian talking bear, she sees the chance to right a dreadful wrong and makes plans to capture Paddington. At first, this story path took me out of the moment and magic of the articulate Paddington. But, as this “sinister” thread wove its way into the story, and Nicole Kidman’s chewing scenery as the bad guy, it works. The characters, as one would expect, are simply, but not sketchily, drawn and the actors give them the caricature needed. Sally Hawkins, as the kind and loving Mary, gets the best out of her sweet, kindly role while Henry has the greatest arc of character as he, first, refuses to accept Paddington then becomes the hero of the day. “Paddington” is mostly live action but the little bruin is a mastery of convincing and effective CGI. Ben Whishaw gives exactly the right tone in voicing the lovable Paddington, making him a real member of the Brown Family. Great and good fun will be had by all.