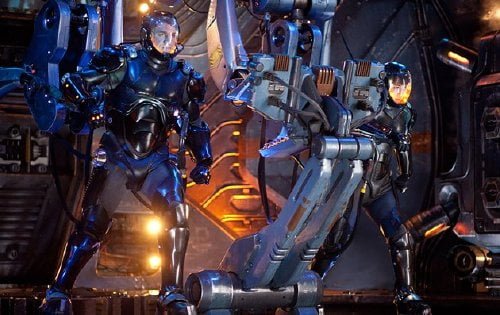 Jaeger pilot Raleigh Becket (Charlie Hunnam, "Nicholas Nickleby," TV's 'Sons of Anarchy') recalls that he always expected the aliens to attack from above, but that's not the way it happened. A bridge to another dimension opened at a fault on the floor of the Pacific Ocean and gigantic monsters called Kaiju began to emerge, devastating coastal cities on the "Pacific Rim."

An early trailer for this film made it look like another loud "Transformers" hybrid, but Cowriter (with Travis Beacham, "Clash of the Titans")/director Guillermo del Toro ("Hellboy," "Pan's Labyrinth") is no Michael Bay and his film is more thoughtful, more character driven and altogether more enjoyable than those clanking clunkers. "Pacific Rim" is an obvious homage to the seminal Japanese atomic monster movies done on a far more enormous scale and the science used to battle them is both mechanical and biological - picture Ripley suited up all "Tron"-like to take on an alien in a suit the size of a Manhattan high rise. Del Toro gives us an extremely fast paced background story in the first four minutes of running time. We see the Golden Gate bridge being dragged down, the enormous facilities where the Jaeger - giant fighting robots piloted by humans - are created and learn that they were too much for one pilot to control. A new concept of mind-melding copilots proves workable if the pilots are in sync enough, which gives rise to brother, father and son and couples teams. Meanwhile Jaeger Marshall Stacker Pentecost (Idris Elba, "Thor," "Promotheus") has two scientists - the comical biologist Dr. Newton Geiszler (Charlie Day, "Horrible Bosses") and nerdy mathematician Herman Gottlieb (Burn Gorman, "The Dark Knight Rises," BBCA's 'The Hour') - competing to figure out how to stop the influx of Kaiju by defeating them at the source. We start with Raleigh and his brother Yancy (Diego Klattenhoff, Showtime's 'Homeland'), who defy orders from Pentecost to protect a fishing vessel in a move that makes them vulnerable to the Kaiju, who rips open the robot's shell, killing Raleigh's brother. Somehow Raleigh makes it back to shore with his damaged Jaeger (in a mind blowing scene, the robot kneels on the sand as a beachcomber gapes up in awe, all the more effective for the mist Del Toro's added). Five years later and the Jaeger project is about to be dismantled as the onslaught of Kaiju increases, but Pentecost is determined to nuke the portal, even though most of his pilots are dead and his Jaegers destroyed. Time for Raleigh to reenter that world, teamed with a greenhorn, Mako Mori (Rinko Kikuchi, "Babel," "The Brothers Bloom"), saved as a little girl from a rampaging Kaiju by none other than Pentecost himself. This film is made for the IMAX experience, as Del Toro achieves some stomach dropping sense of height, and considering the film was converted to 3D rather than shot in that format, this is one of the few 3D films I'd recommend paying the upcharge for. It's quite something to see these giant metal men airlifted out into the water to take on some seriously nasty, quite tricky beasties. There is some amount of visual confusion when the action is shown from too close in, exacerbated by Del Toro's decision to add blue electrical charge outlines to his Kaiju, but many of these fight scenes are otherwise breathtaking. Inside, we see the copilots, their feet on what appear to be huge pneumatic, rotating pumps to simulate the giant strides their Jaeger makes (and like the Transformers, each is named, all are different). The 'drift,' that melding moment where pilot memories are combined, is a bit of a silly concept, but it works well enough in context, especially when Newton decides to try it with a Kaiju brain. Elba is a sympathetic yet commanding presence just right for his role. Hunnam's serviceable, but Kikuchi's terrific, another 'damaged' soul who must prove herself while deferring always to her savior. The other pilot teams are of little interest except for the hotshot baiting of Chuck Hansen (Robert Kazinsky, "Red Tails"), a jerk who works with his far more reasonable dad (Max Martini, TV's 'Revenge'). Day and Gorman are hilarious squabblers, a bromance in the making and then there's Del Toro's go-to guy Ron "Hellboy" Perlman as Kaiju black marketeer Hannibal Chau. Clifton Collins Jr. ("Traffic") adds dimension as a command central dispatcher. Summer is far from a favorite season for most film critics, but Del Toro's given us a grand old popcorn movie that deserves to be seen on the big screen - the bigger the better.