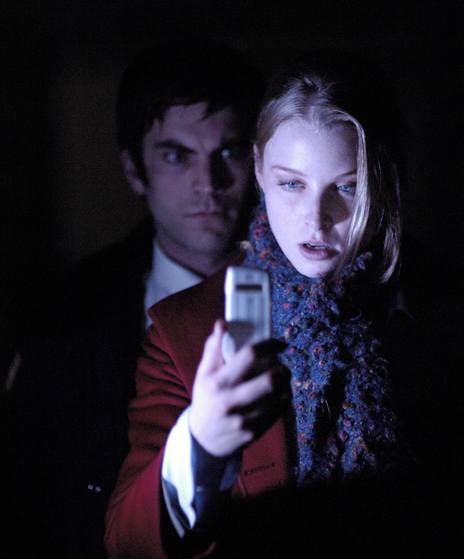 It's Christmas Eve in New York City and while her office parties and empties, the beautiful Angela Bridges (Rachel Nichols, "Shopgirl," "Resurrecting the Champ") does what she always does - works. But tonight she's promised her sister she would not be late getting to the family dinner in New Jersey and although she's broken promises before, her delay tonight will be because of the horrific forces beyond her control when she finds her car dead in the water on "P2."

First time director Franck Khalfoun clearly learned from the experience of acting under the direction of Alexandre Aja on "Haute Tension." Aja, who also delivered a nifty update of "The Hills Have Eyes," produces and cowrites here and the mentor and his protege have delivered a Christmas slasher flick that does just what it sets out to do. Wes Bentley ("Ghost Rider"), who has never again delivered on his "American Beauty" promise, may be a tad over the top as a sociopathic parking attendant, but the paces he puts his victim through are cleverly thought out (one impossibility excepted) and continually rachet up the tension. After letting her assistant off early and forgiving the married colleague (Simon Reynolds, "The Prize Winner of Defiance, Ohio," "Saw IV") embarrassed by the drunken pass he made, Angela weighs herself down with gifts, a Santa suit and giant Teddy bear and heads for her building's cold, deserted parking garage. When she can't start her car, she notices the lit up office of Thomas (Bentley) and goes for help. If his chained up Rottweiler makes her a bit nervous, his suggestion that she stay with him for dinner is downright creepy. Wisely heading back to the building's lobby, Angela calls for a cab, but it is odd that security guard Carl is nowhere in sight and when the cab arrives, Angela discovers she is locked inside the building. With no other options, she heads back to the garage where Tom awaits with more forceful means of persuading her to join him for that holiday meal. What at first appears to be a standard 'haunted house' cat and mouse chase, instead turns into something a lot more horrific and thankfully, Khalfoun and Aja have established their workaholic heroine a girl with smarts. If the terrified blond held at dinner is reminiscent of "The Texas Chainsaw Massacre" and the next horrific act, where we discover Tom's got more than one captive is a twist on the "Saw" flicks, they each have their own style. A tip of the hat to "The Shining" is an inventive homage as is the setting's to "Die Hard," East Coast style. Clearly cast for the intense dark blue eyes which have always photographed weirdly, Bentley plays the good cop/bad cop psycho killer routine with an over the top earnestness that turn many of his line readings ("Do you want to get me fired?!") into much needed comic relief. Nichols walks the line between courageous grit and complete and utter terror as befits her part, making Angela someone we hope gets out alive. The worst decision the filmmakers make is to turn Angela unnecessarily vengeful, pandering to audience bloodlust over their heroine's moral character. The gore is suitably R-rated, with several grossout moments guaranteed to turn heads away. Production values befit the gritty urban location, although focus pulling is clearly not the chief technical talent on display here. One must sift through more cruft to find the gems in the horror genre than any other, so given that handicap, "P2" is a cut above addition that should satisfy fans in search of their holiday horror. It's a little gut clench of a movie.