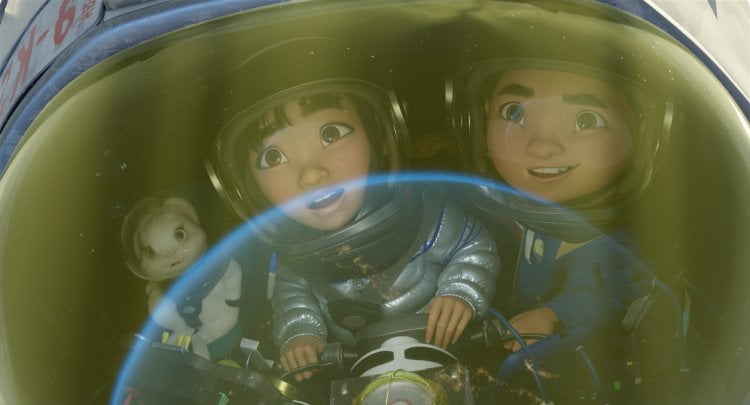 Still grieving the death of the mother who brought her up on mooncakes and tales of the Chinese Moon Goddess Chang'e (voice of "Hamilton's" Phillipa Soo) and Jade Rabbit, Fei Fei (voice of Cathy Ang) is none too happy when her father (voice of John Cho) begins keeping company with Mrs. Zhong (voice of Sandra Oh) and her rambunctious little boy Chin (voice of Robert G. Chiu).  After Chin tells her their parents are getting married, Fei Fei, hoping to prove her mom’s stories true, builds a bunny shaped rocket and launches herself and her pet rabbit Bungee “Over the Moon.”

Netflix’s animated Oscar hopeful was written by the late Audrey Wells ("The Hate U Give," along with Jennifer Yee McDevitt) who, knowing this would be her last project, chose it to leave a message behind for her own daughter.  But while there are valuable lessons for children to be found in a movie they will surely enjoy, the film is a Frankenstein assemblage from other sources ranging from its own Pearl Studios’ “Abominable” to the obvious influence of Wells’s favorite film “The Wizard of Oz.”

In “Abominable,” the loss of her father leads a young girl who cherishes the violin he gave her to return a legendary Yeti to its habitat on a wild adventure accompanied by an unruly little boy.  Here, in another family where food plays an important role, a young girl brings the Chang’e doll her late mom gave her to prove the legend exists and finds a pestering little boy has stowed away on her rocket ship.

But has she really rocketed to Chang’e’s kingdom of Lunaria or is it all a dream?  Fei Fei crash lands with her pet just like Dorothy.  The goddess, whose bright and fantastical Lunaria is much like Oz, demands a ‘gift’ which will be rewarded with a wish just like Oz’s wizard.   Chin will witness a scene much like the witches’ guards chanting ‘All we owe, we owe her’ and a hallway towards Chang’e’s throne is identical to the one leading towards the wizard’s.  Other aspects of the animation also recall other, more original films (Chang’e’s grief is even depicted like “Get Out’s” Sunken Place), many from the Pixar slate.  Banished Chang’e advisor Gobi (voice of Ken Jeong), a lime green teddy bear of a creature, is like this film’s Bing Bong, although he has a happier fate.  (Director Glen Keane (Oscar winning animated short "Dear Basketball") and codirector John Kahrs (Oscar winning animated short "Paperman") have extensive careers with both Disney and Pixar animation.)

On the plus side, Fei Fei’s character design gives the girl choppy, unruly locks, an admirably distinct trait.  The gathering of extensive family to share in specialized foods may not be an original element, but it is well utilized, giving the film flavor while moving its plot.  Fei Fei’s water city is beautifully realized, a crane an elegant and symbolic note.  Luminaria’s Care Bears color scheme is a bit jarring, but its odd ball creatures, like its ‘bad egg’ chickens and Miyazaki influenced giant floating frogs add oddball charm.  Chang’e’s ping pong match with Chin is an amusing interlude, made visually interesting with split screens.  And Chang’e makes quite the splashy entrance, Phillipa Soo belting out ‘Ultraluminary,’ the only of the original songs written by Christopher Curtis, Marjorie Duffield and Helen Park that is in any way memorable.

“Over the Moon” has its heart in the right place, but this is one of those animations that will play better with its juvenile demographic than their parents.

Fei-Fei (Cathy Ang) and her mom and dad have a happy life and, as a family, make moon cakes while mom tells her stories of the beautiful and magical Moon Queen. Four years later, the young girl has lost her mom but not her dream of flying to that storied orb in “Over the Moon.”

Netflix makes its foray into the flashy animated musical adventure story that has been a staple for the Mouse House for decades. The result, with “Over the Moon,” is generic copy of Disney, replete with insipid generic songs that sound like many others I have heard before.

I think the last musical animation that I actually really liked was “Beauty and the Beast (1991).” That had many really good songs with memorable lyrics (“Be Our Guest” anyone?) and fun, too. I saw “Over the Moon” just recently and do not remember a single line from the many songs. But, I admit am not a fan of musicals, animated or otherwise – with exceptions, like “BatB,” Across the Universe (2007)” and, a huge surprise for me, “Hamilton (2020).”

The story starts out with the aforementioned happy family life interrupted by tragic loss. Soon, though, that changes when Fei-Fei’s dad brings home a “special friend.” Suddenly, the young girl’s life is turned upside down and she decides to, literally, shoot for the moon and prove her mom’s story were real. Sets out to build her very own space ship and, when done, her adventure begins.

This is where “Over the Moon” goes from being “grounded” as a story and morphs into a colorful fantasy adventure as Fei-Fei puts her plan into action. She gets her dad to foot the bill to pay for her “science project” and builds her dream machine to the Moon. The journey across the void to her destination is interrupted by a pair of playful Space Lions and Fei-Fei and a stowaway companion crash land on the Moon.

Here, the story brings in the once-thought mythical Moon Queen, Chang’e (Amanda Soo), who demands, when she meets Fei-Fei, a special gift from the girl. This begins another adventure as she tries to figure out and find that special gift.

There is a lot going on in this kitchen sink of an anime that deals with loss, discovery, bravery, friendship, intelligence and understanding all wrapped in a cloak of girl power. There is a good message here for the young femme audience, but the telling of it is very cluttered with the many obstacles Fei-Fei must face to find what is obvious from the start.

The tone and mood of the film’s first third, with Fei-Fei’s loss and grand plan, gives way to a colorful fantasy with the beautiful Chang’e making what seem like frivolous demands for a gift into a grand love story, Be assured that, as expected, all of Fei-Fei’s efforts turn out happily ever after.