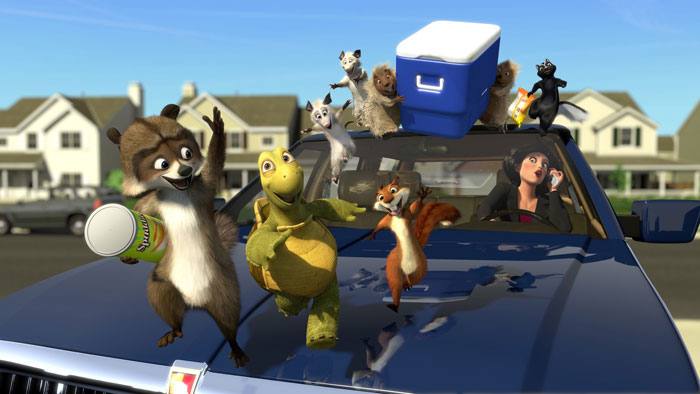 The woodland creatures are waking up after their long winter hibernation and are ready to start foraging for next winter’s food stores. But, something is not right in the forest when they discover a huge green “thing” now surrounds their home. When a mischievous raccoon named RJ (voice of Bruce Willis) arrives on the scene, he claims that on the other side of the green thing is a land of milk and honey. This chagrins Verne the turtle (voice of Garry Shandling), especially when RJ convinces his little family of critters to go “Over the Hedge.”

When Vincent (voice of Nick Nolte), a bear, comes out of his hibernation, he catches RJ (voice of Bruce Willis), a raccoon, about to make off with his towering stash of junk food, which gets destroyed in RJ's resulting panic. Vincent gives RJ one week to replace every last bit or it's curtains for the coon, but RJ gets lucky when he meets a group of innocent woodland creatures who've never experienced the joys of nacho cheese chips and convinces them to venture into human territory to gather new food types "Over the Hedge." Dreamworks may be behind Pixar when it comes to computer generated imagery, but they're certainly ahead of Blue Sky Studios ("Ice Age: The Meltdown") in the storytelling department. "Over the Hedge" improves upon the animals-in-a-strange-land formula from "Madagascar" by instead honing in on a phenomenon we have all probably experienced, that of wildlife being forced out of its natural habitat and adapting to human manufacture. And it's funnier. Writers Len Blum ("The Pink Panther"), Lorne Cameron ("Brother Bear"), David Hoselton ("Brother Bear") and Karey Kirkpatrick ("Chicken Run," "The Hitchhiker's Guide to the Galaxy") choose two wild species who pioneered the exploration of human trash - the bear and the raccoon - to start spinning their tail before then introducing us to the more unspoiled species led by Verne (voice of Garry Shandling), a turtle. This group, who are also just awakening from hibernation, include a family of porcupines (mother and father given Canadian inflected vocals by Catherine O'Hara and Eugene Levy of "A Mighty Wind"), Ozzie (voice of William Shatner) the opossum and his daughter Heather (voice of pop star Avril Lavigne), skunk Stella (Wanda Sykes, "Monster-in-Law") and Hammy (Steve Carell, "The 40 Year Old Virgin"), the now completely cliched over-caffeinated squirrel (see "Ice Age's" Scrat or "Hoodwinked!'s" Twitchy) character. They don't know what to make of the giant hedge that wasn't there when they packed it in for the winter and Verne's exploratory trek to the other side is rather terrifying as he comes into play with an automatic sprinkler system and witnesses a butterfly connect with a bug zapper. When RJ comes across these innocents, his savvy with acquiring tasty treats and entertainments seduces and corrupts all but Verne, whose tail tingling indicates something is not quite right. And RJ's unchecked cheekiness does indeed get them into hot water when the neighborhood reacts to its overturned trash cans by hiring the Verminator (voice of Thomas Haden Church, "Sideways") to do them in. "Over the Hedge" doesn't feature cutting edge animation (it's animal characters are of the squeeze toy variety with minimal touches of texture) and its relationship storyline - scam artist comes to love those he seeked to harm - is no where near as clever as its nature versus suburban sprawl backdrop. Its human characters are the same type of havoc wrecking humans used in "Toy Story. " Yet it is packed with so many delightful observations and its actors so well cast that one can forgive it its shortcomings. Hammy may be a tired concept, but Carrell makes him fun and a climatic 'Hammy-eye-view' of 'time-come-to-a-standstill' is a hoot. RJ's perspective on how animals 'eat to live' but humans 'live to eat' is backed up by a witty demonstration and his foray into backyard barbecues with a well-meaning Verne is a classic cartoon set piece. The filmmakers astutely spin their own version of brand name slogans ('Spuddies - because enough just isn't enough') and cleverly incorporate pop culture references from 'The Waltons' to Pepe le Pew. "Over the Hedge" could be the beginning of a series with something to say about man's influential relationship with his fellow creatures. It's laugh out loud funny while getting its audience to look at itself from another perspective.

Shortly in to this violent crime thriller, I saw direct references to Mario Puzo’s “The Godfather” with its warring Yakuza crime families, debates over dealing illegal drugs within Japan, desires to move into legitimate businesses and ruthless elimination of one’s foes. This tome, though, is by the legendary Japanese gangster film maker Takeshi Kitano and, while the story is familiar to American audiences, this is strictly a Japanese gangster film with all its trappings of mixed loyalties, vying for power and taking it by any means necessary. Be warned that this is a violent movie, even for a gangster film, and Kitano relishes in depicting his characters’ ruthlessness. Kitano plays a key role as crime family boss, Otomo, but this is a true ensemble film with the many players getting equal shrift with star Kitano. Do not expect to get the intricate machinations on the first watching of “Outrage.” With the many characters and cat and mouse power plays of the Yakuza bosses and their underlings, it will take another sitting to sort things out. But, I think it is worth the effort.