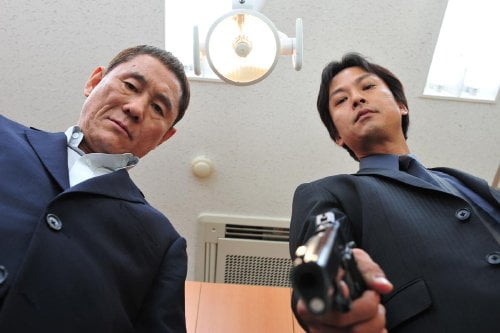 They say there is no honor among thieves. For Tokyo’s Yakuza clans this is true, in spades, as the powerful Sanmo-kai family attempts to take total control of Japan’s vast crime empire in “Outrage.”

Takeshi 'Beat' Kitano hasn't had a film in U.S. release since his 2003 rendition of "The Blind Swordsman: Zatoichi" (a 2008 release, "Achilles and the Tortoise" had a very limited opening). "Outrage" marks a return to his violent gangster films and it's great to have him back. This stylish, ultra violent film is a Yakuza take on "The Godfather" if that film's family drama gave way to only its mob politics. One seemingly small slight, the gouging of a Yakuza member on a bar/brothel bill, sets of a chain of retribution that leaves almost no man standing. Beautifully shot (cinematography by Katsumi Yanagijima) with a fine sound design (Senji Horiuchi), "Outrage" shows how the egos of powerful men can destroy what they have built. The executions and mutilations are staged inventively, from the excessively gory to the deadly hushed.

Shortly in to this violent crime thriller, I saw direct references to Mario Puzo’s “The Godfather” with its warring Yakuza crime families, debates over dealing illegal drugs within Japan, desires to move into legitimate businesses and ruthless elimination of one’s foes. This tome, though, is by the legendary Japanese gangster film maker Takeshi Kitano and, while the story is familiar to American audiences, this is strictly a Japanese gangster film with all its trappings of mixed loyalties, vying for power and taking it by any means necessary. Be warned that this is a violent movie, even for a gangster film, and Kitano relishes in depicting his characters’ ruthlessness. Kitano plays a key role as crime family boss, Otomo, but this is a true ensemble film with the many players getting equal shrift with star Kitano. Do not expect to get the intricate machinations on the first watching of “Outrage.” With the many characters and cat and mouse power plays of the Yakuza bosses and their underlings, it will take another sitting to sort things out. But, I think it is worth the effort.