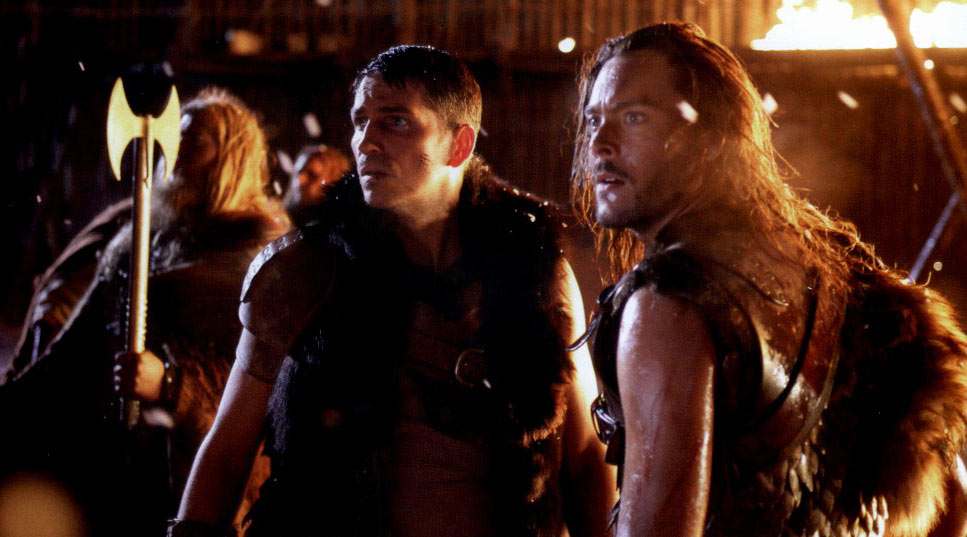 When Kainan's (James Caviezel, "The Passion of the Christ") space ship crashes into a Norwegian lake in 709 A.D., King Rothgar's (John Hurt, "Hellboy II: The Golden Army") tribe believes he is the one responsible for torching neighboring Gunnar's (Ron Perlman, "Hellboy II: The Golden Army") whaling village. Kainan tells them he's from the North and hunting dragons, which, in a way is true - a monster from his home planet, known as a Moorwen - hitched a ride and once Kainan convinces his captors of their imminent danger and helps them fight the creature, they come to trust the "Outlander."

So, when you tell someone you're going to see a movie about Vikings fighting an alien, everyone chuckles, but cowriter (with his "Underworld: Rise of the Lycans" partner Dirk Blackman)/director Howard McCain's film isn't half bad, like "Reign of Fire" crossed with "Beowulf" spiced with a dash of "Alien." The production, which was shot in Nova Scotia and Newfoundland, boasts beautiful scenery and the actors all create characters one can care about. If only McCain hadn't indulged himself with a run time of 115 minutes, about ten minutes too many, "Outlander" may have gone beyond 'not half bad,' but even in its present form it is destined for a cult audience. Kainan makes his way out of his sunken ship and discovers his captain is dead, slashed through the chest. He comes across the burned out village and the slashes on a hut door appear to have been caused by whatever killed Kainan's shipmate, but Wulfric (Jack Huston, "Factory Girl") and his soldiers find Kainan and bring him back to Rothgar as a prisoner. Kainan will not change his story despite beatings and when he saves the king from a bear during a hunting expedition, his status amongst Rothgar's tribe is elevated. He also captures the eye of the king's daughter, Freya (Sophia Myles, "Underworld," "Tristan + Isolde"), an independent woman who has rebuffed Wulfric's, and every other man's, advances. The tribe celebrates the slaughter of the mighty bear and Kainan holds his own against Wulfric in a game of shields (the men balance walking atop the shields held in the air by Rothgar's men), a talent that will come in handy later when Kainan supervises the building of a trap for the Moorwen, which makes its presence known before the night is over. Caviezel's had a weird career, but one would not expect him to star in this odd genre hybrid, yet he brings quiet strength to the star man who has a tragic past (recounted in flashback, we learn Kainan was part of a plot to wipe out the Moorwen to take over their planet, scenes of which echo, believe it or not, a sci-fi Holocaust). Huston has a load of charisma as Wulfric, whose character does not react to the newcomer as usual in these kind of films and Myles is believable as a beautiful warrior. John Hurt is cashing a paycheck, sure, but so is Perlman, both cast for type. Aidan Devine brings a puckish playfulness to Einar, one of Wulfric's soldiers who loves his Mead. Young Bailey Maughan ("A History of Violence") is also good as an orphaned boy who takes a shine to Kainan. The film is fairly violent, McCain not above closeups of gushing arteries. The art directors have created believable settings for Norsemen of their time. The Moorwen has some character, although it's lethal tail often seems so busy one expects the creature to have tentacles until it finally appears. The score by Geoff Zanelli ("Madagascar: Escape 2 Africa") is utterly banal but unobtrusive. An extended final climactic chase into caves to slay the beast goes on, and on, and on, but McCain sends us off with a Viking funeral worth sticking around for. "Outlander" is such a bizarre hybrid of genres one expects a cheesy rental, but it turns out to be more engaging than it has any right to be.