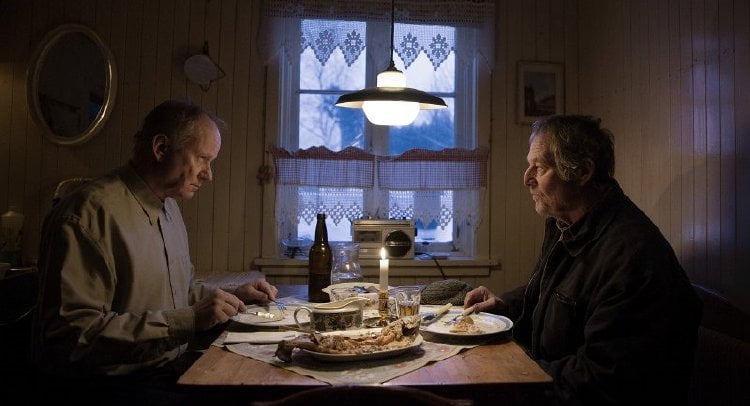 With a new millennium approaching, widower Trond (Stellan Skarsgård) is looking forward to celebrating quietly and alone in his new home in Sweden.  But one night, he hears a man outside calling for his dog.  Neither says anything that night, but Lars (Bjørn Floberg) played a significant role in Trond’s childhood back in 1948, when he and his father (Tobias Santelmann) summered in the Norwegian woods and 15 year-old Trond (Jon Ranes) went with Lars’ (Torjus Hopland Vollan) older brother Jon (Sjur Vatne Brean) “Out Stealing Horses.”

Writer/director Hans Petter Moland’s ("The Beautiful Country," "In Order of Disappearance") latest is an affecting coming of age tale about how an affair affects two boys in different families.  Unfortunately the adaptation, from Per Petterson's prize winning novel published in the U.S. in 2007, has excised enough of the story that the film is narratively disjointed, particularly surrounding events during the war.  The film never explains, for example, that the title phrase, which is indeed used by the boys to refer to riding wild horses, is also used by Trond’s father to refer to smuggling people from Norway into Sweden.  Still, Moland’s film establishes a unique sense of place in two separate eras and a summer full of life changing events for his protagonist.

After Trond’s odd nighttime meeting with Lars, who, having found his border collie Poker embarks on a tale about how he once had to shoot a German Shepherd and how he hoped to never have to do it again, Moland skips us back a pace or two to Trond’s arrival in his new home town, also on a snowy evening.  Barely missing a head on collision with a lumber truck, Trond plows into snow on the side of the road, an event which makes him recall the death of his wife of thirty-eight years in a similar accident when he was driving.  Moland’s time jumping here is disorienting, his emphasis on events odd as we never again hear about Trond’s wife who he is sorely grieving.

1948 is where most of the action is, introduced by the younger Trond telling us about how he spent this summer without his sister or mother because his dad found women ‘distracting.’  He takes off on what appears to be a regular outing with Jon, the two finding wild horses to ride.  But Jon is acting strange.  Telling Trond he has something to show him, Jon presents a majestic tree to climb.  High up in its branches he shows Trond a small egg, then drops it, crushing its brethren within their shells inside      the nest before allowing himself to fall.  Back in his wooden cabin, Trond learns from his dad that he village is abuzz with what happened the day before. 17 year-old Jon forgot his mother (Danica Curcic) was out and went out hunting rabbits when he was supposed to be watching his 10 year-old twin brothers Lars and Odd.  Once remembered, he rushes home, hanging his rifle in the farmhouse hallway.

Once the inevitable tragedy occurs, the drama shifts to the adults, although still from Trond’s point of view.  In her grief, Jon’s mother appears to become hyper sensual, responding to both the young Trond, but also his father, while Jon’s father (Pål Sverre Hagen) becomes more withdrawn and suspicious as they all work to fell Trond’s timber along with Franz (Gard B. Eidsvold).  (All this community shared labor with sexual undertones recalls the Amish barn raising of “Witness.”)  We are told this is the wrong season for this work, the logs heavier with sap, the river water shallower, making transport riskier.  No one’s making good choices, so when Trond takes the opportunity to snuggle into Jon’s mother’s neck on the shore, his father, atop a pile of logs with Jon’s dad, becomes distracted and another accident, albeit not fatal, befalls Jon’s family.

It is this section of the film that becomes the most muddled, though, Moland skipping back to 1943 where Jon’s father fails to cover his wife’s tracks when she attempts to help a German escape.  Trond’s father is involved – somehow – as told to Trond by Franz.  Little makes sense here considering what develops five years later.

We will see Trond's mother (Tone Beate Mostraum) devastated by a letter informing her her husband is not returning and also learn that after running the farm single-handedly for his mother, Lars left when Jon returned and claimed everything.   The Adult Trond ponders his father’s role in Lars’s upbringing.  Skarsgård and Floberg, whose adult Lars appears intellectually stunted in some way, are affecting together, two damaged men finding companionship, albeit one rather reluctantly.  “Out Stealing Horses” is an odd film, a stunning production whose modern day emotional truths rest upon patchy history.