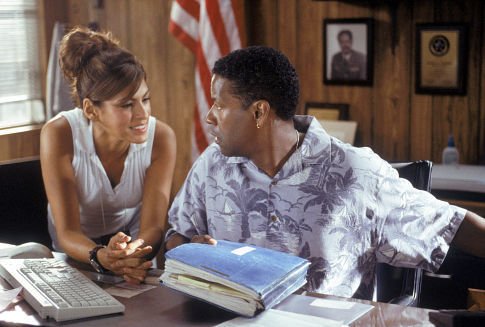 Banyon Key Chief of Police Matt Lee Whitlock (Denzel Washington) has a wife, Alex (Eva Mendes, "2 Fast 2 Furious"), he still loves who's divorcing him and a high school sweetheart lover, Anne (Sanaa Lathan, "Love and Basketball"), with a suspicious abusive husband (Dean Cain, TV's "Superman"). He's been successful on the job, having just made a high profile drug bust, but when he 'borrows' state's evidence to the tune of $485,000 to save Anne from terminal cancer he discovers he's been set up, his detective wife is on the case and he's just plain "Out of Time."

Director Carl Franklin ("Devil in a Blue Dress," "One True Thing") serves up a spritely piece of entertainment featuring a playful performance from Denzel Washington that almost distracts from the implausible plot. If you're willing to forgive some unlikely scenarios, "Out of Time" is cracking good fun. Chief Whitlock is startled when he accompanies Anne to a doctor's appointment (introduced as her brother) and learns of her terminal diagnosis. When Anne can't arrange to draw money from the life insurance policy her husband has just increased tenfold to one million dollars, Whitlock, sure that the cash in his custody will remain there long enough to be replaced, gives it to her to travel to a pricey Swiss clinic. When she doesn't appear for an arranged meeting that night, he goes to the Harrison's house and hears her arguing with husband Chris, but leaves when a nosy neighbor turns on floodlights. The next morning the Harrisons' house has burned to the ground with two bodies inside, the neighbor's witness sketch looks just like him, Miami DEA agent White (Veryl Jones) calls demanding the drug money immediately as evidence in another case and his detective wife begins scanning the victim's phone records. David Collard's script would have us believe that the chief would immediately begin a cover up race that seems doomed to failure, but his dialogue is so entertaining and the dual investigations so neatly entwined that it is easy to forgive some far-fetched plot contrivances. Collard makes sexual innuendo almost fresh in a fake out opener and writes a showdown between Whitlock and Harrison that sizzles with tension (Washington and Cain punch the scene out of the park). He also blesses Whitlock with a uniquely hilarious and original sidekick in John Billingsley's Chae, the type of medical coroner who wears shorts, a fishing hat and is annoyed when somebody dies during Friday night cocktail hour. Franklin paces the film well and achieves an airiness and lightness with his ensemble while still building a real sense of danger and suspense. Washington gives one of his best performances to date by taking himself a little less seriously. He's sexy with the suddenly adult Lathan and throws sparks with the able Mendes. Dean Cain is on the money as a threatening former football star and Billingsley almost walks away with the entire movie. Graeme Revell's score fits the bill as well. "Out of Time" may not be the Oscar bait it has seemingly been positioned for, but it's a damn good time at the movies in a year that's had too few of them.

Mathias Lee Whitlock (Denzel Washington) is the chief of police of Banyan Key, FL, a sleepy little hamlet where the local excitement, recently, was a big time drug bust that included a cool $485000 in cash, now secured in the safe at the chief's station. When Matt learns that his girlfriend, a married woman, has an all but incurable cancer, he decides that the drug money can go to better use to get her the only treatment that can possibly save her life. But, his kind action opens a can of worms that the chief must control, or else, before he runs "Out of Time." Matt thinks that, what with the way the wheels of justice turn so slowly, he can "borrow" the 485 grand and not have to worry about it for quite a while. At least, that's the plan. Then, two things happen: Ann, who has survived an abusive marriage with her husband Chris (Dean Cain), disappears with the cash; and, Agent Stark (Terry Laughlin) of the DEA informs Chief Whitlock that the government is ready to take the drug loot to prosecute an even bigger case. To complicate matters, Mathias, out of uniform, stops by Ann's now-deserted house that night and is seen by a curious neighbor. He then learns, the next morning, the house went up in flames - leaving the charred corpses of two people. Suddenly, the top policeman in town is a suspect to murder and Mat has to do some fast thinking really quick if he wants to keep from losing everything, especially his freedom. Chief Whitlock has yet another problem when he learns that his former wife and colleague, Alex Diaz Whitlock (Eva Mendez), is now a homicide detective assigned to head the case of the double murders. He not only has to find Ann and the money before the Feds find out the truth and arrest him for stealing evidence, he has to stay ahead of the murder investigation led by the one person who knows him best. It's a cat-and-mouse game that could end with Mat doing a whole lot of time in prison. Helmer Carl Franklin has worked with Denzel Washington before ("Devil in the Blue Dress") and directs his star in a thriller that is mostly entertaining despite numerous holes in the busy plot by scripter Dave Collard. Things start out with the chief getting called out, late one night, to investigate a break in at the home of Ann Harrison (Sanaa Lathan), a very pretty and sexy young housewife. As she describes the crime and the perpetrator, you realize that there is more going on here (wink, wink) than a crime scene and their relationship is much more personal than professional. It's a clichéd opening but the players are attractive and it is nicely shot (as is the whole film) by Theo Van de Sande. As the plot thickens, a bit obviously but the energy and variety of the twists and turns help to temper this, things rev up as circumstances start to get out of the chief's control. He has to juggle his own, secret investigation of where the heck the money and Ann are. He has to keep the arrogant and impatient Agent Stark and the Feds at bay. And, he has to hold off being implicated in murder by his earnest, resourceful detective wife. Franklin keeps this all very fast paced and intricately woven despite a stitch being dropped here and there. The numerous story inconsistencies but are mostly the nit-picky kind, like how Alex, who we learn just got the job of detective, is suddenly the head of a big-deal murder investigation in charge of some unknown number of her "boys," as she calls them. Also, Mat and Ann are seen carrying on a pretty public affair even though her husband, Chris, is a violent loose cannon with a rep for abusing his wife for the tiniest infraction. There is a warm sultriness to the production that befits the Florida Keys locale. Van de Sande's camera catches the humid warmth of the town on Banyan Key using the softness of the sunshine to give the film an almost sepia tone at times. Night shoots have a crisp clarity that keeps everything sharply in focus. Denzel Washington does a solid job as a man who is a victim of circumstance, even though he lit the fuse of the explosives that threatens to engulf him. The actor does a good intelligent everyman caught in a web of his own making who must call upon all of his resources to make things right. Sanaa Lathan, who made such a splash in her debut film, "Love and Basketball," has matured into a striking looking young lady and lends the right vulnerability to her character, Ann. Eva Mendez isn't quite believable as the gung ho homicide detective - she seems like she is reading her lines when she barks out orders to her "boys" - but is definitely an asset with her good looks and gorgeous figure. Dean Cain gives his Chris the right note of sinister sleaziness. Stealing the show is John Billingsley as Chae, the Banyan Key coroner and loyal friend to Mathias. The actor is used as the comic relief for what could have been an extremely dour film noire and Billingsley is a riot in the role of the scheming, chain-smoking buddy. "Out of Time," with a more experience scripter to fix the implausible bits and pieces and plug up the plot holes, could have been a top-notch thriller. Still, it is a well-made, well-acted and entertaining suspense story that works more often than not.