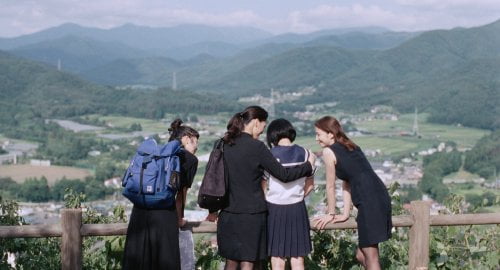 Sachi Kôda (Haruka Ayase, "Cyborg Girl") was left to care for her sisters Yoshino (Masami Nagasawa, "I Wish") and Chika (Kaho) when their mother left their old, sprawling home in the seaside town of Kamakura a year after their father left her for another woman. News of their father's death fourteen years later brings the three twenty-somethings north where they meet their sibling from his second marriage, Suzu Asano (Suzu Hirose), and invite her to come live with them in "Our Little Sister."

Writer/director Hirokazu Kore-eda ("After Life," "Nobody Knows") has taken a graphic novel, Yoshida Akimi's 'Umimachi Diary,' and made a sweeping, glorious movie, one which continues his themes of family, ancestry and what we leave behind. Death hovers over the film which begins and ends with a funeral, a Buddhist Memorial Service setting the scene for a central conflict, but although often melancholy, "Our Little Sister" celebrates life, love and beauty. We're introduced to three distinctly different siblings. Yoshino awakens at her latest boyfriend's apartment, rushing back home to take flak from Sachi, who disapproves of her taste in men and partying ways. Sachi is the maternal stand-in, serious minded, a head nurse with no apparent man in her life (it is only later we will learn she's been carrying on an affair with Dr. Kazuya Shiina (Shin'ichi Tsutsumi, "Why Don't You Play in Hell?"), a man married to a clinical depressive). Chika is a bohemian free spirit whose sporting goods manager boyfriend Hamada (Takafumi Ikeda) offers to show off his feet, horrifying Sachi, after having lost six toes on Mount Everest. Sachi observes tension between Suzu and her stepmother Yôko (Yûko Nakamura), their father's third wife, and her offer to take her seems thoroughly well intentioned, but both Sachi and Suzu, alike in many ways, keep their emotions hidden. Is Sachi lashing out at her own mother (Shinobu Ohtake) in accepting Suzu, the child of their father's betrayal? Their father, whom Suzu knew better than her three half sisters, is referred to as 'kind' but also 'useless.' As each of the three Kôdas form their own relationships with Suzu, the past comes alive in new light. There is a reason Kore-eda frequently shows these women praying in front of their home's ancestral shrine. What makes "Our Little Sister" so special is that in addition to the story of these four wonderful women, Kore-eda establishes a strong sense of place, Kamakura offering up one delight after another as the seasons change. There are symbols of impermanence in the autumn leaves and spring cherry blossoms which fall, yet traditions continue, passing from one generation to the next. Suzu is taught how to make plum wine from the fruit of the fifty year old tree in the backyard, the liquor stored in batches dating back to their grandmother. Another maternal figure, cafe owner Ms. Ninomiya (Jun Fubuki, "Pulse"), faces death, but her boyfriend promises that her fried mackerel will live on at his own cafe (he also whispers to Suzu that she should visit on her own to hear tales of her dad, whose love of seasonal whitebait was passed on to her). There are so many wonderful moments in this film, like Suzu's admirer, Fûta Ozaki (Ohshirô Maeda, "I Wish"), whisking her away on his bicycle to experience a tunnel of cherry trees or Sachi's realization that the nurse she criticized earlier for carelessness cares tenderly for the terminal patients in the ward Sachi has transferred to. Yoshima grows up when she becomes a customer representative at her bank, listening to the hardships of people in her town with a male colleague more sober minded than her usual male companions. Sachi's tentative reunion with her mother Miyako is brought about by honoring Miyako's mother, the past reconnecting the present. Kore-eda has directed his ensemble cast to perfection, each character's temperament feeding into his grand design (Kaho's unconventional Chika is especially endearing while Fubuki's exit leaves a hole in the heart). The production is lovely, Japanese locations somehow feeling like our own memories. Kanno Yoko's gentle score is the perfect finishing touch. The Brazilians have a word for the feeling Kore-eda evokes, saudade, a mixture of happiness and sadness, a love that remains once someone is gone. "Our Little Sister" is as close to perfect as a film can be. Grade: