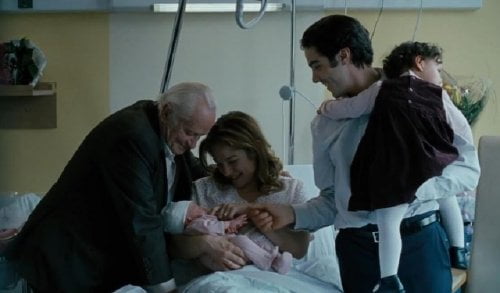 After a passionate weekend by the sea, young medical student Mounir (Tahar Rahim, "A Prophet") asks Murielle (Émilie Dequenne, "The Girl on the Train") to marry him. But there's a third person in the mix - Dr. André Pinget (Niels Arestrup, "A Prophet," "You Will Be My Son") has brought up the Moroccan born lad since childhood and Mounir still lives with him. At first, the young couple co-exist happily with their benefactor but when Murielle begins to yearn for familial independence, she finds the non-blood ties intricately and tightly tied in "Our Children."

Cowriter (with Thomas Bidegain, Matthieu Reynaert)/director Joachim Lafosse has taken on a lot of subjects in this film, meshing them into one devastating portrait about how one woman could be driven to mental breakdown and unbearable tragedy. This beautifully cast film delves into colonialism, illegal immigration, the role of wife and mother, and, perhaps most importantly, the burden of charity on those who receive it. Lafosse begins after the ending, a wan, hospitalized Murielle murmuring 'You have to bring them to Morocco. You have to tell their father.' as an older and younger man embrace in grief outside. A single cut presents the polar opposite, a radiant Murielle and Mounir making love. We get the first hint that something's off when André arrives for dinner to meet Murielle and immediately excuses himself with a call from a patient. But he also notes that he's already eaten, a passive aggressive play. Then he plays both sides down the middle, advising Mounir not to move too fast, asking Murielle to move into their household. He's blindsided when they announce their engagement, but regains the upper hand when he tells Mounir, who's been denied residency at a local hospital, that a full time job exists in his practice and does so in front of Murielle. It takes a while to figure out just who this family doctor is to Mounir. At first it appears he is his father, but no, things are more complicated. By the time Murielle is exhausted from housework and the children who arrive like clockwork, André has banned her own sister, Françoise (Stéphane Bissot, "The Nun"), from visiting his house and she has discovered that her sister-in-law is also André's paper wife, but Mounir, who was never officially adopted, must tend to her actual mother-in-law Rachida (Baya Belal, "Incendies") in Morocco while she is left behind. And Morocco is where she wishes to go to break free of André. The unsettling way new information is dropped in, from the first conversation about Mounir's younger brother Samir needing a bride for residency (which in turn sows seeds of doubt about Murielle's own marriage), is one of Lafosse's story telling strengths. Doubts and suspicions build, chinking away at Murielle's mental state. She's eventually taken to a therapist, Docteur De Clerck (Nathalie Boutefeu, "Polisse"), but sworn to secrecy that she lives with her family doctor, an ethics violation. Lafosse's other tool is Arestrup, whose performance is so insinuative, his every interaction with Murielle and Mounir's little girls brings a sense of dread. Dequenne, who won a Cannes Best Actress award for this performance, unravels as his grip strengthens and, surprisingly, it is only the Moroccan influence that provides her any freedom - when Rachida, who's spent time with the family in Europe, departs, her embrace of her daughter-in-law suggests both worried intuition and sisterhood. Lafosse layers and layers what stifles Murielle so gradually, that only those her share her point of view can really understand her undoing. The score's 'spinning' violins, volume ebbing and flowing as notes traipse up and down, are a reflection of her mental state. When the inevitable happens, Lafosse's restraint provokes dread - he's given us a real psychological understanding of the unthinkable.