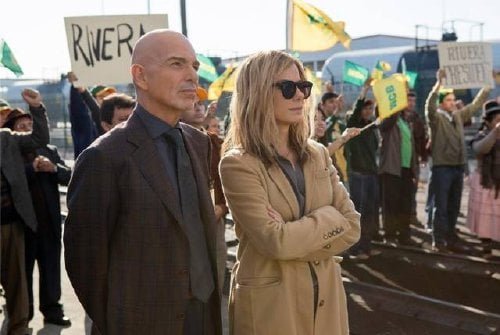 Political strategist Jane Bodine (Sandra Bullock) was one of the best in the business until a series of matchups against Pat Candy (Billy Bob Thornton) landed her in rehab, the media dubbing her 'Calamity Jane.' She's hauled out of her self-induced retirement making pottery in a remote mountain cabin by Nell (Ann Dowd, HBO's 'The Leftovers') who, working for clandestine U.S. interests, wants her to spearhead the campaign of former Bolivian president Castillo (Joaquim de Almeida, "Fast Five"), currently fifth in the polls. In La Paz suffering from altitude sickness, Jane analyzes Castillo's unpopular public persona and decides "Our Brand Is Crisis."

'Inspired by' Rachel Boynton's 2005 documentary of the same name and starring Sandra Bullock in a role originally intended for producer George Clooney, this political satire takes far too long to get to its message then fumbles it. Director David Gordon Green's ("Pineapple Express," "Joe") production provides a solid canvas but until the last act, screenwriter Peter Straughan's ("The Men Who Stare at Goats") adaptation is more focused on frat boy pranks than the disturbing political content of the material. The character that drives the narrative, that of Castillo, never fully comes into focus. What we get instead is Bullock flexing different acting muscles while trotting out tried and true comedic pratfall. The Bodine we meet is disillusioned and cynical, dark circles under her eyes signifying a bruised warrior who's lost her fight. When she lands in La Paz, she's overcome with nausea, dragging an oxygen tank about, collapsing on any available surface. When she finally marshals the energy, she sums up her client simply - 'He can't win.' With no guidance, her team (Dowd, Anthony Mackie and Scoot McNairy) flails about with focus groups and ill advised commercials. Then she learns her nemesis, Candy, is guiding front runner Rivera (Louis Arcella, "The Family") and the news lights her fire. She brings in LeBlanc (Zoe Kazan, "Ruby Sparks"), a dark arts practitioner in background dirt, and the race is on. What follows is a game of one-upmanship, Bodine concocting negative advertising against her own candidate to get him on board with her takedown tactics. She employs a downtrodden local teen with sentimental ties to him, Eddie (Reynaldo Pacheco, "Beginners"), in a grasp for her own credibility. The film progresses with Jane and Pat (Thornton's character a James Carville standin) exchanging surface pleasantries, then hitting each other where it hurts - a llama for a shoot run over, a candidate's train pulling away at a crucial juncture. The competitiveness builds to a level of silliness that sees Jane demand Castillo's bus overtake Rivera's on a dangerous cliff road just so she can moon Candy and his crew. Castillo is groomed - walk this way, cry on camera, stress the message - but all we learn about the candidate is that he thinks the people need a father figure who knows what is best for them. Bullock and Thornton are fun together, even if the film's substance is weak. They meet with surface pleasantries then stab each other in the back (the best trick is left for last when Jane plants a dangerous quote attributing it to Goethe). But a symbolic decorative tin mask equated to Jane as evil in Bolivia is far more substantive than the film itself and Jane's final grab for redemption is one about face too many. Grade: