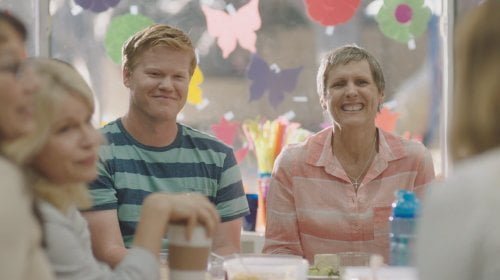 When his mom Joanne (former SNLer Molly Shannon, "Me & Earl & the Dying Girl") is diagnosed with a rare form of cancer, David (Jesse Plemons, "Black Mass," 'Fargo's' 2nd season) returns to Sacramento from NYC to help care for her. With his dad (Bradley Whitford, TV's 'The West Wing,' "I Saw the Light") working, sister Rebeccah (Madisen Beaty, "The Master") involved in her upcoming wedding and Alexandra (Maude Apatow, "Funny People") in her final year of school, Dave's life as a comedy writer is deemed the most interruptible, but his homosexuality has also kept him distanced, his family unrelatable "Other People."

Writer/director Chris Kelly ('SNL') makes his feature debut based on his own personal experience, a snapshot of a young man's worst year ever which remarkably evolves into mom's last, loving gift. Kelly's drama punches us right in the gut from the onset, an inconvenient interruption of a powerful moment awkward to the point of absurdity, a scene he'll cycle back to in his finale. Dave finds everything about Sacramento backwards while everyone in Sacramento hears 'comedy' and 'NYC' and assumes he writes for 'SNL.' In reality, Dave's sold a comedy pilot and is in an anxious holding pattern waiting to hear if it's being picked up. He's broken up with Paul (Zach Woods, HBO's 'Silicon Valley,' "Ghostbusters") but tells no one, still using Paul as evidence of his family's inability to accept him. He can really only talk to his mom which he gets plenty of opportunity to do as her primary caregiver, walking around the neighborhood and taking her to chemotherapy. But Joanne eventually throws in the towel, deciding on quality over quantity of life and she enjoys a respondent surge. When Dave goes back to NYC to perform with an improv group, his family follows, mom even volunteering to go on stage. Joanne also takes a stance against her husband's refusal to enter Dave's apartment, asking Paul for a glass of wine as Norman waits outside. Kelly alternates between comedy and drama, all from Dave's point of view. He has a real ear for people's discomfort around serious illness as they brush over reality with obvious platitudes. But his work with his two central characters is even better, illness breeding intimacy, confession and absolution. A late act confrontation between father and son is also powerful, brutal accusations leading towards gentle revelations. Somehow Kelly even sells a family singalong (to Train's 'Drops of Jupiter'). Dave's time alone is alternately hilarious (his uncomfortable enjoyment of twelve-year-old Justin's (J.J. Totah, TV's 'Glee') exuberant-bordering-on-inappropriate drag performance at a gay birthday party) and painful (his drunken misreadings on a first date). Plemons may seem an odd casting choice as a gay urban professional, but the actor surprises, cloaked resentments building to emotional breakdowns and genuine connection. Shannon really makes us feel the life draining from her character with occasional rallies of intimacy and silliness (her overdose on medical marijuana is an infectious giggle, Whitford's comatose reaction to same a contrasting visual gag). Support is extensive, with amusing appearances from June Squibb ("Nebraska") and Paul Dooley as Joanne's parents, a compassionate turn by Woods as Dave's ex-with-benefits and 'Reno 911!'s' Kerri Kenney as the raucously enthusiastic Aunt Lynne. With Joanne's hoped for survival for her daughter's wedding achieved, Kelly breaks your heart with life's cruel ironies, the occasion playing out in unexpected ways. "Other People" feels honest through and through. Grade: