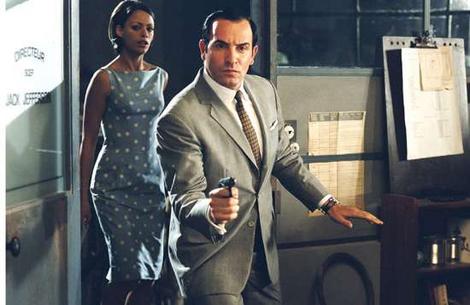 Hubert Bonisseur de la Bath (Jean Dujardin), better known in the dark world of espionage as OSS117, is deadly at his spy job, desired by women and not too bright. It is 1955, the Soviet menace is in full swing and Hubert’s beloved fellow agent, Jack (Philippe Lefebvre), is murdered. The super spy takes on the job to find Jack’s killers and save the world in “OSS117: Cairo, Nest of Spies.”

Things start out in black and white as Hubert and Jack help defeat the Nazi menace and steal the plans for the V2 missile. Jump forward ten years and agent OSS117 is the cream of the espionage crop, defeating the bad guys’ evil plans and leaving the woman longing for more. Jean Dujarding is perfect in every way as the serio-comic OSS117. The actor has the good looks of George Lazenby (in which Bond film did the male model turned actor star?) and a goofy, innocent charm that makes his numerous faux pas hilarious. One, in particular, has Hubert awakened in the early morning hours by a muezzin’s call for prayer. His handling of the intrusion is non-PC and had me guffawing. The actor proves a varied talent with his comic timing, physicality and propensity for song. The cast supporting our hero is first rate. I was surprised to learn that this is not an original but another in a series that began in 1956 with OSS117 n’est pas mort” and continued into the 60s, capitalizing on the Bond craze of the time. Director Michel Hazanavicus does an outstanding job in making a modern spoof that has the look, feel and humor of a film that could have found an audience back in golden days of the James Bond adventures. The filmmakers do an incredible job of bringing Cairo (nest of spies) back to the 50s and the spoofing is perfect. I will watch this one again. (I’m watching it right now, as a matter of fact.)