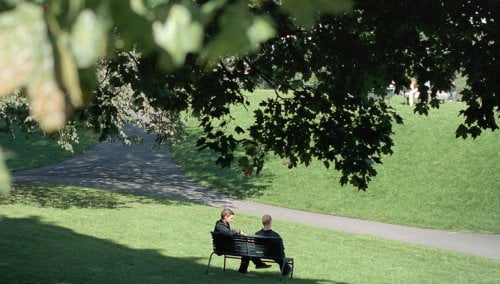 Anders (Anders Danielsen Lie, "Reprise") is thirty-four years old and two weeks away from wrapping up a drug rehab program when he's granted off-site leave to go on a job interview. After that takes a downward turn when he's honest about the missing years on his CV, Anders instead spends twenty-four hours reconnecting with friends, old lovers and family in "Oslo, August 31."

Springing from the central concept in Pierre Drieu La Rochelle's novel "Le Feu Follet," writer/director Joachim Trier has made almost a photo negative of his previous film, "Reprise." Where that film took two young friends and pondered where their futures might go with stylized energy and bouncing timelines, this one looks back quietly over one day. Trier has matured as a filmmaker, creating an existential character study, not only of Anders, but of an entire network of people connected to Anders and Oslo itself. The films do share their non-professional star (Lie, now a doctor) and beautifully chosen music. Oslo is introduced with a series of 'living' snapshots -leafy streets, tram cars, a building demolition - as we hear the voices of many, presumably Anders's circle, telling us what the city means to them. When we meet Anders in a therapy group, others are expressing fear and uncertainty about reentering the real world, but he says he feels neither here nor there, just tired. And yet the first thing he attempts on the outside, in a beautiful, natural setting, is to kill himself, Virginia Woolf style. But Anders sputters back to the water's surface and goes to visit Thomas (Norwegian TV host Hans Olav Brenner), an old friend with a successful career, wife (Ingrid Olava) and two young children. Thomas spends quite a bit of time with Anders, admitting that he was afraid he would lose him to drug addiction and, therefore, pulled away. Anders lays out a life of non-achievement, not content with being a loser but having won nothing. Thomas reveals a banal life of looming deadlines, meaningless lectures and a marriage sparked more by shared videogaming than sex, not quite the image of success Anders had envisioned. After sabotaging his interview when faced with concern instead of interest, Anders goes to meet his sister, but is joined by her friend, Tove (Tone Beate Mostraum, "House of Fools"), instead. In some wonderfully written dialogue, well delivered, one can read between the lines to find resentment at what Anders has done to his sister's inheritance - their parents are selling their house because of financial problems he caused, she does not want him to go there unescorted and she's not yet ready to face him. When Anders goes to meet Thomas at a party thrown by mutual friends, he once again faces unwanted 'help,' host Calle (Emil Lund) forcing an anecdote to draw him into a circle, and the truth of a life less happy than it appears with ex-lover, hostess Mirjam (Kjærsti Odden Skjeldal). Thomas never shows up, but Anders steals enough money from guests' coats to visit his dealer before heading out all night long with Petter (Petter Width Kristiansen), a man he's just met, and two women. That first suicide attempt may be telling. Despite the naturalness of Trier's direction of his actors, his script and overall tone have a literary feel. In fact, Anders was a former writer applying for a job at a magazine which he nimbly critiques to its editor. Repeated phone calls to an illusive Iselin, Anders's former lover now living in New York, are like periodic journal entries on his present state of mind. The opening, revisited with embodied voices as snippets of conversation at cafes where Anders stops, is a verbal montage. Anders's critique of the media's fascination with essays on HBO series comes amusingly back into play as party talk he walks away from in disgust. But there are cinematic counterparts and punchlines as well. Battleship, the videogame Thomas plays with his wife online, is also being played by Anders's dealer, a pointedly humorous reference to the connectedness of the people in Anders's life. The film as a whole gives the impression of a soul floating through a cloud of other souls which Trier visualizs with a nighttime bicycle ride through Oslo. Petter rides ahead with his date, shooting clouds from a fire extinguisher back at Johanne (Johanne Kjellevik Ledang) and Anders, riding together behind. There are echoes, a little DNA of "Wings of Desire" here. In the end, Anders is alone, having returned to his parents' empty house, family photos stacked and sorted, ready for packing, more souls alone and together and connected yet moving on. As in "Reprise," Trier chooses his music carefully, here using a Daft Punk song and three written and performed by Torgny Amdam, one with ethereal vocals from Maria Due. "Oslo, August 31" is an intimate yet sprawling poem tracing one man's journey through many towards his own destiny.