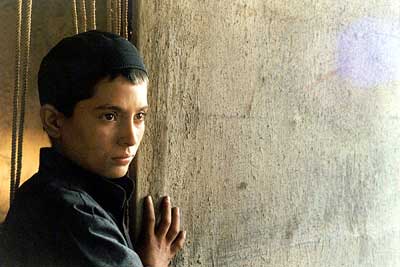 With the Taliban in power in Afghanistan, women are not permitted to work or to walk about unaccompanied by a male family member. When three generations of women lose their breadwinner to war, the grandmother comes up with a plan for survival. Her twelve-year old granddaughter will cut her hair and dress in her father's clothes because 'people will always believe their own eyes.' This frightened little girl (Marina Golhahari) must now make her own way in Kabul under the alias "Osama."

Writer/director/editor Siddiq Barmak has created a searing portrait of the Taliban's crimes against humanity, specifically women, in this first Afghani film shot last year after the Taliban's fall. The film begins with shaky, handheld coverage of blue-burka'ed women marching for a right to work. A young incense seller, Espandi (Arif Herati), addresses the cameraman - 'Do not film me - the Taliban is coming to raise hell.' On the fringes of the march are a young girl (Golhahari) and her mother (Zubaida Sahar), desperately trying to get away from the upcoming retaliation. Taliban members arrive in trucks and begin spraying bullets and shooting high-pressured water at the crowd. The camera's operator is beaten and the image ends in the dust of the street. After this documentary-like opening, cinematographer Ebrahim Gharfui's ("At 5 in the Afternoon," "Kandahar") camera stabilizes to follow the story of the young girl who has witnessed the horrors she must live with. Mother, owed four months salary from the hospital she has been working at, is told that it is being closed and has no money. A man with a dying father shields her identity from a Taliban raid (a foreign nurse is hauled off) and agrees to pay for his father's care at home. Transporting the woman via bicycle, however, he is challenged once again because the woman's exposed feet will arouse men. The Taliban don't only oppress their women, they harass the men who accompany them. A kindly grocer who fought with the woman's husband agrees to take her daughter on as an assistant, teaching the girl the outward ways of men at call to prayers and Abolutions, but she cannot resist jumping rope in a back room. One day, though, even he can no longer help when a Taliban member insists the boy accompany him. Herded with confused young boys in the streets, 'Osama' finds herself in a Taliban training school, where her identity is challenged from the onset. Although she escapes discovery during training for Abolutions after wet dreams, where old Mullah Sahil lasciviously describes her as a nymph, her female biology eventually betrays her. Barmak chose to work with non-professional actors and young Golhahari conveys the anxiety of living in a constant state of fear. Barmak loses some small amount of sympathy with the girl's utter helplessness, though, which is believable until it exasperates when she almost betrays her whole family with loud, damning hysterics the moment the door has closed between her and the suspicious Taliban man who has followed her home. He finds the heart of a conspiracy of women, collectively protective, in a scene where a buoyant wedding party instantly turns into a wailing funeral for the prying eyes of the Taliban. This is poignantly inverted in a scene leading up to Osama's final fate. Barmak indicts the former regime over and over, never more effectively than in a public trial where his opening 'Infidel journalist' is sentenced to death by firing squad and the foreign nurse to death by stoning. 'Where is the witness?' asks an Afghani man in the crowd of a friend. 'There is none' is his answer. Although the film's look is spare, given its location, Barmak nonetheless achieves moments of poetry such as Osama planting her shorn pigtail in a flower pot, later seen being 'watered' by a dripping IV. Several scenes are accompanied by a hauntingly beautiful woman's voice singing to mournful music. "Osama" is a harrowing tale of inhumanity in the name of extremist religion. The loss of one childhood howls through Barmak's film.

A young beggar (Arif Herati) entreats a woman (Zubaida Sahar) and her 12-year old daughter (Marina Golbarhari) for money when they are engulfed by a peaceful demonstration against the Taliban oppression by a mass of burka-clad women. Suddenly, Taliban troops descend upon them and powerful fire hoses are brought to bear on the helpless crowd. The mother and daughter save themselves from the stampede of women but now, under the government's terror laws, they are not allowed to venture outside of the home to earn a living unless accompanied by a "legal companion." Grandma comes up with a plan - cut the girl's hair, dress her as a boy and have her pass as an authorized chaperone in the first Afghani-made film since their liberation from Taliban rule in "Osama" This is an incredibly haunting and frightening journey of life by a little girl whose world is, suddenly, turned upside down when the cruel Taliban regime take over the ruling of Afghanistan. The violent ends the ultra-fundamentalist Muslim rulers are willing to take against the people holds the entire country in fear of harsh and quick judgment for the smallest infraction against the Taliban's fundamental Islamic tenets. The small foreign-run hospital where the mother and daughter work is shut down and they are left without income. Out of desperation the mother agrees to go along with the grandmother's plan and the terrified girl is prepared for her debut as a boy. Mother convinces a former colleague of her dead husband to take the "boy" on as an assistant and he reluctantly agrees. The man tries to tutor his ward in the ways of acting like a man but not before a Taliban official becomes suspicious of the odd-acting boy at morning prayer. But, her employer convinces the officer of her masculinity and dispels his doubts. Nonetheless, the next day the Taliban round up all of the boys in the village, including the frightened girl, and herd them into the Madrassa, the religious school now being used for Taliban military training. Very quickly, her masculinity again comes into question and the beggar boy, Espandi (Herati), comes to her aid, hiding her secret and giving her the name Osama. Espandi cannot mask the truth forever and the other students and the Taliban teachers grow increasingly suspicious of Osama. Her physiology finally betrays her, she is found out and imprisoned by the Taliban court. Her punishment is marriage to an old Mullah who has three other wives and the girl must face a life of misery. As you might expect from this sad story, "Osama" is a harsh chronicle of life under the oppressive rule of the Taliban through the eyes of an innocent girl. She is made to face the unflinching way the new rulers will put down any question to their authority and is terrified enough as a young girl. But, when she is forced to pose as a boy the terror increases tenfold and she lives in mortal fear every minute. For all of the harshness of "Osama" filmmaker Siddiq Barmak introduces certain poetic moments and slight glimmers of happiness for the little girl. When her grandmother lovingly braids her hair as she explains her plan of dangerous deception, only to cut them off to make the disguise realistic, the girl plants one of the severed blades in a flowerpot as a sign of hope. When she is found out and imprisoned with other detained women she is finally left alone to jump rope and act as what she is - a young girl. Any hope or happiness under the pitiless Taliban, the filmmaker states, is a short lived and fleeting. Barmak examines the horror and terror of life under the Taliban as the organization ruthlessly puts down the desperate demonstration by the women. They try and execute an "infidel" journalist who takes pictures of their mass abuse in the streets. They sentence a foreign, woman doctor to be stoned to death for nothing more than trying to treat the needy Afghanis in her care. They invade every household and take away the boy children to become one of their numbers without consideration or care over the impact to the families. The thought of this utter oppression brought shivers as I watched "Osama." The fear and utter terror felt by the young girl, whom we only know by her male moniker, Osama, is palpable as she first poses as her mother's son and escorts her to try to find work caring for those driven out when the Taliban shut down the hospital. Her fears takes a quantum leap when she is dragged away from her job and forced to live in terror of being found out. This is a gut wrenching, truth-inspired film that shows the horror of the rigid, unyielding fundamentalism of the Taliban that is tempered by the fact that their cruel, self-righteous, unforgiving rule is now a thing of the past in Afghanistan. Let's hope, as bleak a story as it is, that "Osama" is the beginning of the start of a national film industry in Afghanistan that matches the Iranian resurgence in filmmaking over the last decade. Be aware that this work, the Afghan entry for best foreign language film, is a harsh, no punches pulled film that will cause an emotional impact on the viewer.