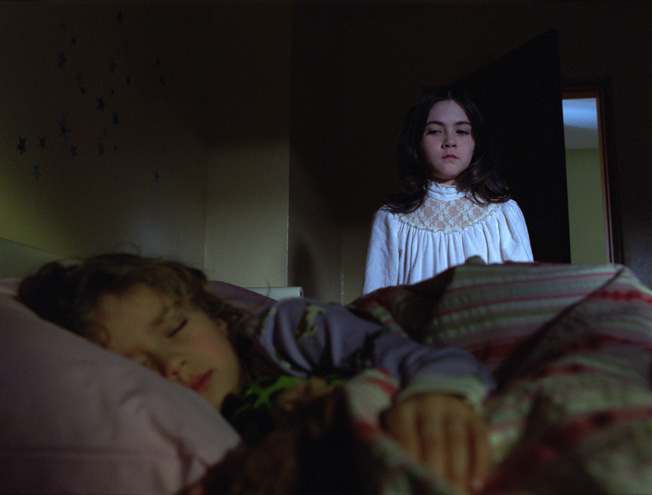 In order to fill the void of losing their baby, Kate and John Coleman (Vera Farmiga, "The Departed," "Joshua" and Peter Sarsgaard, "Rendition," "Elegy") decide to add to their family of four through adoption and are drawn to an older child, 9 year-old Esther (Isabelle Fuhrman, "Hounddog"). When bad things start to happen, Kate, whose alcoholic past makes her ripe for manipulation, must convince John that all is not right with their "Orphan."

Watching the trailer for "Orphan" will convince anyone that if they've seen one evil kid movie, they've seen 'em all, but they'd be wrong. If you think you can guess Esther's secret, guess again. Sure, this first published script from David Johnson from a story by Alex Mace goes through the subgenre checklist, but when Sister Abigail (CCH Pounder, TV's "The Shield"), whose wary expression as the Colemans bond with Esther is our first titillating signal that all is not what it seems, has her worst suspicions confirmed, it is with R-rated violence, and when Kate tries to talk to her new little girl at home, she gets some mighty interesting observations in return. Director Jaume Collet-Serra (2005's "House of Wax") serves up a hoot of a trashploitation flick that both follows preset patterns and upends them. It is fitting that "Orphan" was filmed in Quebec, because it's opening dream sequence is almost worthy of Cronenberg. After this ickfest, we meet the tentative couple featured in the dream (and note the part(s) John plays in that dream). Kate is scared, but once she meets the radiant Sister Abigail and sees kids at play she relaxes. It is John, however, who ventures upstairs to the bathroom and is lured into an art room by Esther, painting like a junior naive surrealist. The ultra polite, vaguely accented Esther is turned out like a 1920s convent school girl and, apparently, prefers it that way, informing Kate that she is a little bit different. Ensconced in the (genre cliched uber modern) Coleman household, Esther makes fast friends with youngest daughter Max (Aryana Engineer), deaf since an accident in the backyard pond while mom was draining wine bottles. Elder son Daniel (Jimmy Bennet, "Hostage," "Star Trek") however, isn't buying her and Esther throws down the gauntlet by claiming 'daddy's' attention. At school, Brenda is branded by the evil eye when she makes fun of Esther's 'Little Bo Peep' outfit and when her ankle is broken in a playground fall, Brenda's dad says Esther pushed her. Max signs that Brenda slipped. Daniel has been sworn to silence by having his manhood-to-be threatened. And then there is Esther's uncanny ability to crash the Coleman couple's sex lives. When Kate tries to talk to her about what she has seen, Esther drops the F-bomb. It is clear Esther understands Kate's vulnerabilities and is working them to her own ends. Soon, she's even supported by Esther's shrink, but Sister Abigail's gruesome death not too far from the Coleman's home (she came with regrets about not having done due diligence on Esther's background given Esther's series of unlucky circumstances) has Kate in investigator mode. The call she eventually gets from Dr. Värava (Karel Roden, "Running Scared," "RocknRolla") overseas is up there with the cop's at the end of "When a Stranger Calls." David Johnson's script is smart in how he sets up a family ripe for head tripping without leaning on the crutch of coincidence. Mom's former issues come to the fore fairly quickly, but dad isn't entirely innocent as well, something foreshadowed in both the opening dream and in an episode with a flirtatious school mom. Sarsgaard's semi-sleepy eyes are slightly reptilian (while also hinting at Kate's former illness), ironically marking him as yet another target. Max is a very well written character, introduced insisting that her mother read, once again, about the baby sister taken away to heaven as her bedtime story, her angelically innocent looks belying the underlying sadism of the request. Max's bond with Esther is believable because of maternal betrayal, and her deafness means that she is an adept lip reader, a talent that comes in mighty handy for new big sis. Collet-Serra relies too frequently on the mirror reveal shot and the 'sudden foreground interruption' jump shock and the film is a little long at 123 minutes. Once the big reveal has been made, there are one too many battles to the death to be won. Still, Isabelle Fuhrman's gradual transformation is uncanny (kudos to the makeup team). This is a film that is trashy fun and seriously sleazy yet written with some psychological depth in its characters.