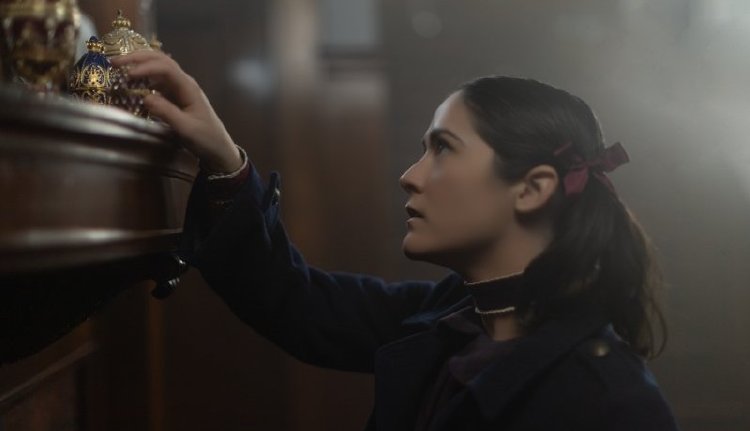 On her first day on the job at the Saarne Institute in Estonia, art therapy instructor Anna Troyev (Gwendolyn Collins) finds herself in a lockdown when the hospital’s most dangerous inmate, Leena Klammer (Isabelle Fuhrman, "Orphan," "The Novice"), gets loose.  After witnessing horrific violence, Anna decides the job is not for her, but she unwittingly transports Leena back to her home where she is slaughtered and her laptop used to find a physical match, the daughter of a wealthy Connecticut couple missing these past four years in “Orphan: First Kill.”

A better title for this film would have been “Orphan: First Mass Slaughter,” as this prequel’s Esther bears more than a little resemblance to Michael Myers.  After portraying a thirtysomething psychopath with hypopituitarism, a condition which makes her appear to be a young child, when she was 10 years old, the now 25 year-old Fuhrman returns to play a 31 year-old masquerading as an 8 year old.  Not only has the actress, her child doubles, makeup artists and prop perspectives made this believable, but fans of the original should be pleased with the switchback twist cooked up by “Prey” writer David Coggeshall (from a story by "Orphan's" David Leslie Johnson-McGoldrick and Alex Mace).

Armed with her projected identity of Esther Albright and an abduction tale, Leena is found by a compassionate policeman and soon Darien socialite Tricia Albright (The Bourne series' Julia Stiles) has arrived to bring her daughter home.  On the plane, Tricia shows Esther photographs, taken aback that the girl doesn’t seem to remember that her grandmother died.  Esther messes up again at Dr. Segar’s (Samantha Walkes) office, evading direct questioning by enthusiastically greeting the parrot her mother has reminded her of – except it is not at all the same parrot.  Her older brother, fencing champ Gunnar (Matthew Finlan), verges on open hostility, telling his friend the girl is weird, but dad Allen (Rossif Sutherland, "Possessor") is over the moon, especially when he discovers that during her missing four years, Esther has not only found a love of painting, but her talent may surpass his own.

Making things particularly creepy, daddy’s little girl, who hides from mommy while she binds her breasts and covers self-inflicted scars with her trademark velvet choker, is becoming a seductive rival for the man whose sexual interest in his wife has reappeared along with his daughter.  But when Esther pays a visit to Detective Donnan (Hiro Kanagawa), who traced her as a missing person and who has suspicions, mom turns up at a very crucial moment.

Make no mistake, this movie is kitschy fun.  Director William Brent Bell ("The Devil Inside," "The Boy") leans on genre tropes (you may find yourself yelling at Anna more than once in the film’s opening segment), but he’s done a commendable job making Fuhrman small with practical effects (Stiles wore 7.5” platforms!).  There are grace notes sprinkled throughout the screenplay, like Gunnar’s self-incriminating proclamation ‘This is America – people like me matter!’ and the rat which lives behind the grate in Esther’s bedroom.  One major disappointment is the introduction of ‘hidden layers’ in Allen’s artworks which can only be seen by blacklight – one expects a big payoff only to see them relegated to closing credits.

“Orphan: First Kill” (and really, the first we see must at least be her second) escalates into a Gothic climax which does its turreted stone manor proud.  After winning Best Actress at Tribeca and getting a Spirit nomination for “The Novice,” Fuhrman is charting one unique career.

Paramount Pictures releases “Orphan: First Kill” in select theaters, on digital and streaming on Paramount+ on 8/19/22.