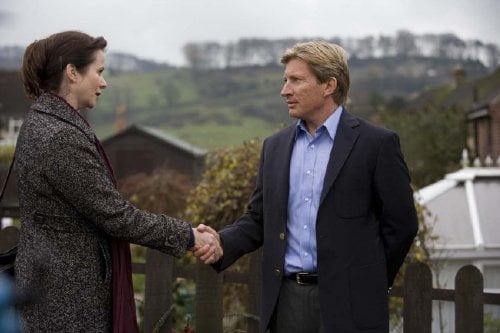 In a Nottingham support group, social worker Margaret Humphreys (Emily Watson, "Breaking the Waves") takes note when she hears the story of a big boat setting sail to Australia with only children as passengers for the second time. What she discovers is that the British Government sent hundreds of children to be adopted, breaking ties with birth parents and siblings to rationalize the benefits of "Oranges and Sunshine."

This feature film debut by Jim Loach, son of Ken, making the jump from television and taking up his father's interest in Britain's social issues, tells a little known (in the U.S. at least), jaw dropping story, in such a quiet low key manner that it fails to elicit the outrage which it should. The screenplay, adapted from Humphreys's book by Rona Munro ("Aimee & Jaguar") follows Humpreys's crusade beginning with that small, shared memory, continuing with journeys to Australia and ending up in Britain's court system. What happened in the 1950s and 60s shows the Colonialist mindset's arrogance and disregard for those they should be caring for. Children were shipped away, told their parents were dead while they still lived. Some even ended up in situations where they were treated as slave labor. Along the way to getting her country to rectify their wrongdoing ('Children of the Lost Empire!' screams one headline), Margaret began to reunite families, although some find only a gravestone to mark their lineage. Some of the more prominent reunions are anticlimactic, played with a reserve which may be realistic but is dramatically flat. Loach's film runs a long 136 minutes, yet he employs cinematic economy to bridge the distance between England and Australia. Cinematographer Denson Baker contrasts the small towns of England and London itself in their drizzly grey blues with the golden hues of down under, the vastness of different oceans used obviously with scenes of Humphreys meeting with one lost child, Jack (Hugo Weaving, "The Matrix"), on the beach. Watson is earnest in her quest, but like the film, she seems a bit washed out. Like movies about racial strife where a Caucasian is the hero, Humphreys is diagnosed with post traumatic stress disorder for empathizing with her victims. "Oranges and Sunshine" is a bit plodding overall, its heroine more perseverant than passionate. Still, this is a story that deserves to be told and occasionally Loach really lets that sun shine on his subject.