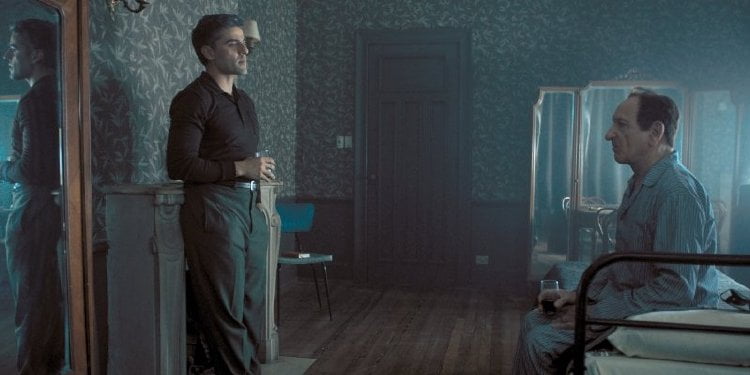 For the many years following World War Two (and to this day), the Nazis responsible for the Holocaust, who escaped the trials of Nuremburg, have been hunted down. In 1960, one of the most infamous, Adolph Eichmann, was discovered hiding out in Buenos Aires and agents of the Israeli secret service, Mossad, launched a plan to bring him to justice in “Operation Finale.”

Chris Weitz's ("A Better Life") thriller about the Israeli team who traveled to Argentina to smuggle Adolf Eichmann (Ben Kingsley) out of the country to stand trial in their home country is a by-the-numbers affair that focuses on the tactics used by Peter Malkin (Oscar Isaac) to get the Nazi creator of the Final Solution to sign a document El Al insisted upon in return for their cooperation in the plot. Almost everything about the film is disjointed, from Malkin's former romantic entanglement with team member Hanna Elian (Mélanie Laurent) to its raison d'etre, the psychology behind Eichmann's eventual cooperation. Screenwriter Matthew Orton throws one obstacle after another in the team's path right down to the moment the plane is on the runway, even then leading us to wonder just what kind of trial faced Malkin and Rafi Eitan (an effective Nick Kroll) when they were forced to stay behind (both men pop up at Eichmann's trial no worse for wear). Haley Lu Richardson continues to impress with her range in a small role as Sylvia Hermann, a young Jewish girl whose date with Eichmann's son Klaus (Joe Alwyn, "Billy Lynn's Long Halftime Walk") leads to confirmation of Adolf's identity. Grade:

Over the past five decades, Adolph Eichmann has been the subject of books, plays (I actually saw the Boston theater run of Robert Shaw’s “The Man in the Glass Booth,” back in the 70s – it starred Jack Warden) and films, as well as copious historical analysis. Director Chris Weitz and newcomer scribe Matthew Orton tackle the subject with the POV of the abduction of the accused architect of death. Sir Ben Kingsley stars as the charged mass murderer and Oscar Isaac joins him as the Mossad secret agent, Peter Malkin, who took part in the kidnap plan and execution. Besides seeing the play 40 years ago (Warden was quite good, I remember), I have always been an avid reader of all things about WWII, including the fate of the planners and designers of the Holocaust. So, going in to “Operation Finale,” I am well informed about the incident and those involved, especially Adolph Eichmann. Of course, anyone familiar with this particular historical event will be on the lookout for the filmmakers taking literary license with the details. As far as I can tell, there was little embellishment, except for the requisite dramatic tension – the filmmakers use an “Argo” type, last flight out suspense buildup – and just straightforward true-story telling. I do not think it is familiarity with the subject but, to me, “Operation Finale,” for all of its “tense” moments, does not deliver much tension. The actors perform their real-life characters well enough, but none, including the stars, elicit my empathy or sympathy (though it is very hard to be sympathetic about Eichmann). The story is told and the details are there but the whole of “Operation Finale” feels flat. Did the filmmakers just lose interest as the project wore on? It does feel like it. It is an interesting historical footnote, though.