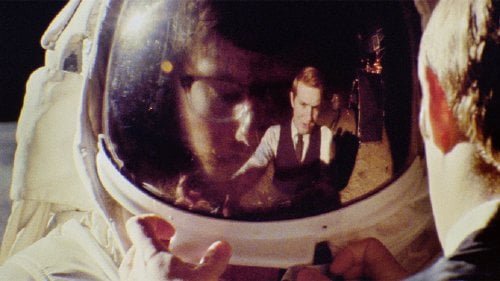 It is 1967 and the height of the Cold War. The CIA reports that there is a Soviet mole working at NASA. To uncover the spy, they send a team of young agents to pose as a documentary film crew to space control central. But, what they discover is far more insidious than a mere mole in “Operation Avalanche.”

We have all heard the conspiracy theory that the Apollo 11 moon landing was a hoax, most famously involving Stanley Kubrick. Writer-director-actor Matt Johnson turns the hoax theory on its ear with his clever and funny sophomore effort. CIA agent Matt Johnson (Matt Johnson) and his partner, Owen Williams (Owen Williams), with their cameraman (Jared Raab) are ordered by their boss to infiltrate NASA and find the spy. The team arrives on site and they bluff their way into the facility and set about placing bugs, even in the office of NASA director James Webb. It is through these bugs that the agents find out the truth. Webb, on a phone call, declares that the US would not be able to land and safely return moon for at least five years. The shocking news gives Matt an idea. Why not shoot, on earth, a fake landing on the moon to save the government the embarrassment for not fulfilling JFK’s declaration in 1961? This is where operation Avalanche turns from just funny to satirical as the resourceful CIA team set about creating their hoax and filming the moon landing. I will leave it at that because there are more surprises in this little gem of a film. Technically, “Operation Avalanche” is a tour-de-force of nostalgia. The movie was shot on intentionally grainy 16mm film and transferred to HD, giving it the look and feel of the day. The found footage genre has been saturated since the days of “The Blair Witch Project (1999).” But, Johnson and his cast and crew make it fresh again in a nostalgic and old fashioned way. It is also an original interpretation of the Apollo 11 moon landing hoax.