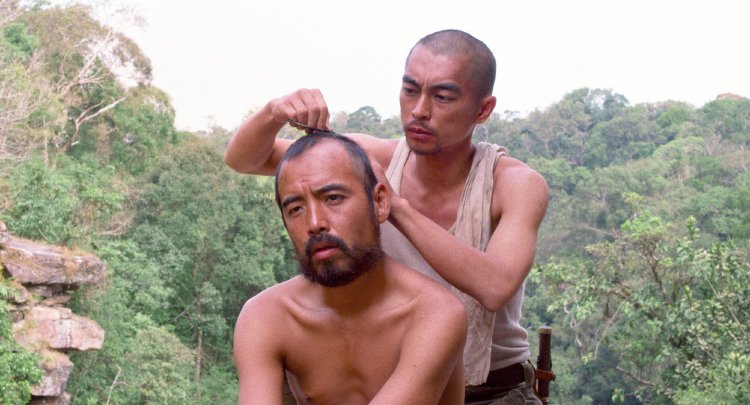 In 1944, as the end of WWII in the Pacific neared, Hiroo Onoda (Endô Yûya as a young man, Tsuda Kanji older), whose fear of heights kept him from becoming a pilot, was recruited for secret guerrilla training in Futamata by Major Yoshimi Taniguchi (Issey Ogata).  Stationed on the Philippine island of Lubang with the mission of protecting its airfield, Hiroo is soon left with a squad of only three and the Americans on his doorstep.  He will persevere for decades, not relinquishing his mission until 1974 in “Onoda: 10,000 Nights in the Jungle.”

When a Japanese soldier thought to still be fighting the war was found in 1974, he made international headlines and was welcomed back as a hero in Japan.  Since that time, the wartime training the Japanese used which kept Onoda at his post for three decades has been called into question, but there is no denying that his is a fascinating wartime tale.  Cowriter (with Vincent Poymiro)/director Arthur Harari’s classical filmmaking style brings us back to the war epics of the 50’s and 60’s and his narrative, with a run time of 167 minutes, certainly qualifies as epic.  The film was the 2022 Cannes Un Certain Regard opener and winner of Best Original Screenplay and Best Cinematography (by the director’s brother, Tom Harari) at France’s 2022 César Awards.

Taniguchi suspects Onoda didn’t become a pilot because the missions were kamikaze, telling him there are ‘other ways to be proud.’  He is not to commit suicide, but to soldier on in Lubang, an important part of his training the recognition that a wartime song referencing fallen acacia flowers is the same no matter what the singer brings to it.  But from the onset, Onoda faces overwhelming obstacles and decides to cut Lieutenant Suehiro (Shimada Kyûsaku) and a group of men he feels will not survive, taking six with him.  Three of those, ‘the triplets of Mito,’ will disappear and be found dead shortly thereafter.

Onoda, his right-hand man Kinshichi Kozuka (Matsuura Yûya as a young man, Chiba Tetsuya older), Shimada (Katô Shinsuke) and young Akatsu (Inowaki Kai) will come upon a Japanese camp that is completely destroyed.  Filipinos there tell them the war is over, but Onoda will not fall for false intelligence, convinced that they are being lured into a trap.

Part of what makes this story so compelling are the mental gymnastics Onoda uses to create his continuing wartime world view.  Filipinos are murdered in acts of war that are, in reality, retaliation for such things as cattle theft, an act that costs them Shimada.  Akatsu leaves, singing his own lyrics which perhaps are what save him.  When Onoda’s own brother arrives, using a bullhorn to plead with him to come out and ‘change the way you see things,’ the man sees an imposter.  He and Kozuka visit the tented site at night, procuring supplies, a newspaper and a radio revealing a heavily Westernized influence on their home, so Onoda theorizes an Eastern/Asian alliance taking on Mao’s China, convincing Kozuka with his Futamata logic.

The foursome veers into individual moments of madness, Onoda the only unwavering one, Yûya’s seriousness of purpose matched yet ever so slightly age mellowed by Kanji.  Kanji and Tetsuya build a complex bond as both close comrades, shaving and grooming each other, and commanding officer and underling, a relationship tested when they capture a Filipino woman, Iniez (Angeli Bayani), and again when Kozuka temporarily loses his weapon.

Harari teases his ending at film’s beginning, the older, solo Onoda, camouflaged in greenery strapped to his back. stopping when he hears that wartime song.  A tourist (Nakano Taïga), set up much like Onoda’s brother was years earlier, a tent bearing the Japanese flag, has hoped to lure the legendary soldier, who many believe dead, out.  And the story does not end there, this stranger sent on a seemingly impossible mission of his own.

The production, filmed in Cambodia, uses the natural landscape well, showing budgetary restraints elsewhere.  Heavy rains are a continual presence, adding to the mission’s difficulty.  The film’s score resembles a haunted lullaby played on out of tune instruments.  Harari’s straightforward filming style, maintaining Onoda’s POV until the tourist is introduced, serves his subject well.  “Onoda: 10,000 Nights in the Jungle” is an intimate epic.

In 1944, newly-commissioned lieutenant Hiroo Onoda (Yuya Endo) was sent to Lubang Island in the Philippines on a special mission: live and fight the American enemy. In 1974, after 30 years fighting an enemy that did not exist, the warrior formally surrendered to his commander in “Onoda: 10,000 Nights in the Jungle.”

There were, in the early 1970s, three separate incidents of Japanese soldiers, conscripted into the war decades before, finally surrendering and ending their self-imposed struggles. I knew about them, including Hiroo Onoda, but none of the details about all of those years.
Director-writer Arthur Harari, with co-scribe Vincent Poyimo resolve my lacking with a straightforward telling of Onoda and his small squad of men who continued fighting a war that is over and, without an enemy to fight, have hunted, foraged and stole to survive for three decades.

My previous perception of these men, who continued to serve their emperor for decades, was that they were poor souls just eking out a meager existence. The filmmakers change my perception and present Hiroo and his man as loyal soldiers to the last, focused on serving their mission and emperor.

We are presented with their day-to-day existence as they try to survive and avoid capture while living off the land – and occasional livestock and produce from the locals. These forays are really the only danger they face in the “war,” but all too real as the farmers shoot back at the thieves.

What should have been the big “climax” to “Onoda,” his coming out of the jungle to surrender, is handled in an almost perfunctory way as the soldier realizes what his life has been. It also shows his dedication to his country, his emperor and his own orders. It is a moving tale of survival and perseverance and, by the way, Onoda was still packing 500 rounds of ammunition and a few hand grenades when he finally quit.