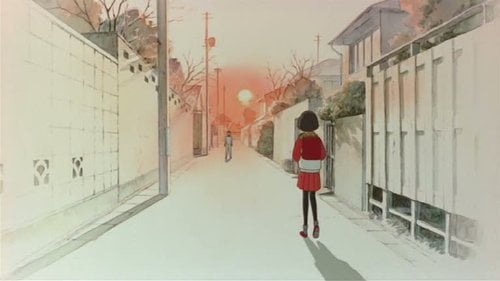 Taeko (Daisy Ridley) is a single, 27-year old office worker in Tokyo. Every year, she takes her summer vacation in the countryside to help in the harvest - this year, of saffron flowers. During her journey and while she lives and works in the tranquil lands, she reminisces about her fifth-grade self in “Only Yesterday.”

Laura also gives "Only Yesterday" a

Unbelievably, this wonderful animation feature from Studio Ghibli, by anime master Isao Takahata (“Grave of the Fireflies (1988)” and “The Tale of Princess Kaguya (2013), was released in 1991 but it is just getting its North American debut, a quarter century later. The story, adapted from the manga by Hotaru Okamato and Yuuko Tone, is adapted by the director and it is a pleasant slice of life of a young woman who, at 27, is single and independent. She shows her unconventionality and spirit by demonstrating with action her love for nature. When she arrives at the station, she is greeted by Toshio (Dev Patel), a young organic farmer whose passion for the land is even greater that Taeko’s. The idyllic summer toiling in the fields and living simply and in harmony with the land is beautifully rendered in its hand drawn opulence, giving subtle life to the landscape. There is a lyrical flow (with hopeful expectations for the viewer) to adult Taeko’s life. Takahata dovetails Taeko’s story with reminiscences of her 10 year old self, growing up as the youngest of three sisters with all the pluses and minuses that go along with that position – you are the baby of the family and often get your way but you also have to put up with receiving the hand-me-downs of her elder siblings. There is a natural child’s inquisitiveness of the things around her but also the selfishness of a child. As the story moves along, there is nice melding of the young and the adult Taeko that allows the viewer to see the influence one’s young self has on what we become in our adult life. There is a slow build to the bonding that takes place between Taeko and Toshio as they get to know each other, becoming kindred spirits in the process. The lovely hand drawn animation rivals the look of today’s CGI in its organic look and feel where a forest or a field looks realistic. Remember, this is a 25-year old film that could have been made now. I lament the decline of hand drawn animation and the rise and domination of CGI in the industry.