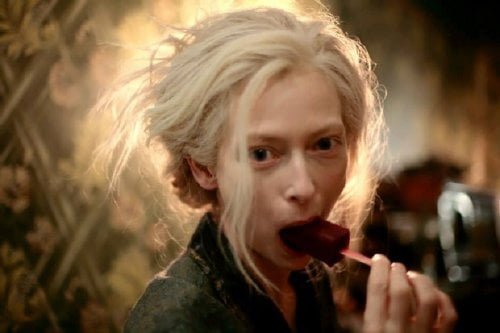 Adam (Tom Hiddleston, "Thor") is a brooding, reclusive musician living in the ruins of Detroit, his needs attended to by Ian (Anton Yelchin, "Star Trek"), his most recent request a hardwood bullet. Eve (Tilda Swinton, "The Grand Budapest Hotel") is an optimistic intellectual, devouring books at an inhuman pace, slipping through the alleys of Tangier to meet friends in the evening. They're also vampires and the "Only Lovers Left Alive."

Don't think writer/director Jim Jarmusch ("Stranger Than Paradise") is jumping on the vampire bandwagon. With his eleventh feature, Jarmusch has used his undead characters' long histories to reflect on humankind, the arts and the mysteries of romantic relationships. The film is stunning, funny and perfectly cast, with Hiddleston the embodiment of rock 'n roll's death fixations contrasted against Swinton's sunny adventuress. With their wild pitch black and white blond locks, these two are a thinker's "Sid and Nancy." As Adam both excites and frets about the release of his music to the underground, Eve delights on meeting up with her old bud Christopher Marlowe (John Hurt, "The Elephant Man," "Tinker Tailor Soldier Spy"), himself an 'underground' author, Shakespeare having gotten all the glory. Marlowe supplies Eve with her blood supply, the old-fashioned way of getting it having gone out of fashion long ago. The 'zombies,' as Adam derogatorily calls them, live such polluted lives their blood is often tainted which can kill a vampire. He gets his directly at the source - a hospital - where he's aided by the corruptible Dr. Watson (Jeffrey Wright, "Basquiat," "The Hunger Games: Catching Fire"). When Eve sniffs out Adam's suicidal thoughts, she arranges her complex night time only flights from Tangier to Detroit and the reunited couple nuzzle with abandon. Eve gets Adam to dance and makes him blood popsicles. But just as things are looking up, Eve's sister Ava (Mia Wasikowska, "Alice in Wonderland," "Stoker"), a party girl with little sense of responsibility, visits, guzzling more than her share of their precious resources. Wasikowska, who's been rather wan in most of her screen appearances to date, is a real surprise here, effervescent and charming enough to seduce Ian, bratty enough to enrage Adam. But the film belongs to its incredibly chic couple who epitomize the adage that opposites attract. Hiddleston is the picture of romantic depression. Adam's contemporaries were Byron and Shelley and he can only see civilization's fall whereas Eve, a much more ancient creature, has seen a more cyclical history and has hope for the future. Swinton looks glamorous but accepts new experiences like a child, full of wonder. Jarmusch's locations epitomize his characters, Detroit's faded glories versus the age old bohemianism of Tangier. When the couple must leave Detroit behind, they face another set back in Morocco, yet both are lulled by the spectacle of an exotic songstress (Yasmine Hamdan). Composer Jozef van Wissem and Jarmusch's band SQÜRL's music was fused together to create Adam's otherworldly rock while the film's soundtrack features Wanda Jackson, Charlie Feathers, Y.A.S. and the Black Rebel Motorcycle Club. Costume places Adam in black rocker garb while Eve is wrapped in neutral cloaks, scarves and gloves. "Only Lovers Left Alive" is like New Year's Eve, a celebration that continues as the old gives way to uncharted territory. It's a masterwork of tone and one of Jarmusch's very best.