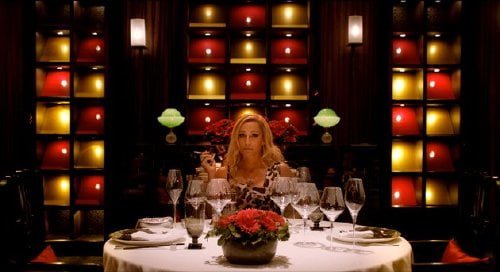 Julian (Ryan Gosling, "Drive") runs a Bangkok kickboxing club as a front for his stateside mother's drug ring, but when his older brother Billy's (Tom Burke, "Cheri," BBCA's 'The Hour') killed after raping and murdering a sixteen year-old prostitute, Crystal (Kristin Scott Thomas, "Salmon Fishing in the Yemen," "In the House") jets in hell bent on having Julian attain revenge against the cop, Chang (Vithaya Pansringarm, "The Hangover Part II"), who sanctioned it in "Only God Forgives."

Writer/director Nicolas Winding Refn ("Bronson," "Drive") said he was interested in making a movie about a man fighting God, in this case Chang, a moralistic cop who believes in protecting women and children. But Refn's God is the 'eye-for-an-eye' type and the reasons for battling him appear to be pure, unrepentant evil, Mama-San style, unless Gosling's pathetic Julian, who's supposed to be conflicted because he feeds lame dogs, doesn't kill or maim the women he pays for sex and therefore thinks perhaps Billy's death was justified, is supposed to count as an example of 'man.' As the woman who's given Julian mommy issues - hell she gives them to about everyone who crosses her path - Kristin Scott Thomas is funny simply because she's able to put on the over-the-top act without breaking character, but make no mistake, "Only God Forgives" is a stunningly shot, hyper stylized paean to violence, ugly behavior and lounge singing that may even miss the boat as a cult item. Whatever Winding Refn's intent was, he's failed to convey it. After the nasty crime Billy's evening ramble is clearly leading up to, Chang calls in the dead girl's father, first to chastise his parenting, then to allow him revenge (Billy's still in the room) and finally to deliver physical punishment in the form of chopping off his forearm for having done what he left the man to do (Chang wears a very sharp blade hung over his back). Crystal arrives looking completely inappropriate for her age in long, bleached hair, platform pumps, clingy clothes and a pound of eye makeup, her talons polished a startling coral, and promptly disparages the polite hotel receptionist because her room's not yet ready. She's just getting started - wait til he gets a load of Mai (Yayaying Rhatha Phongam), the woman Julian passes off as his girlfriend. Winding Refn features a lot of shots of Chang and Julian walking very slowly with very erect postures, flip sides of a coin. From a technical standpoint, its vibrant dark colors, shadowy red curtains and rumbling score accentuated with airy bells is very Lynchian. But one is left wishing that some of these striking visuals were in service to a far better film. All I got out of it is that some fathers are better than others but a mama's boy is doomed.

Filmmaker Nicolas Winding Refn is counting on God forgiving him for the mishmash of genres and styles in his latest film. Is it about kickboxing in Bangkok? Or, is it about a mother seeking revenge for the death of her (sociopathic) son who brutally rapes and murders the 16-year old daughter of a brothel owner? Or, is it about boss cop Kim (Vithaya Pansringarm), who is out to clean up this one horse town and sing karaoke to his men? “Only God Forgives” is all that…and less. Julian (Ryan Gosling) and brother, Billy (Tom Burke), own a gym training kickboxing fighters in Bangkok, Thailand. Julian is a taciturn character without much emotion – even when girlfriend Mai (Yayaying Rhatha Phongam) ties him to a chair and gives him a sexy lap dance, he is a blank cipher. Billy, though, is a loose canon with a penchant for violence. When the pimp refuses Billy his daughter, the psychopath goes to the man’s home and has his way with the girl, and brutally kills her. Police chief Chang gets involved in the murder and Billy’s subsequent death which, in turn, brings in the murderer’s mother, Crystal (Kristen Scott Thomas), into the picture. Crystal is an even looser canon than her dead son. Kristen Scott Thomas chews up scenery and spits it out with relish and is the best characters in the film. Ryan Gosling’s Julian and Vithaya Pansringarm’s Colonel Kim are bookends with each speaking little and moving even less, except for the occasional outbursts of violence. Deadpan expressions and minimal body movement are the hallmarks of these two enigmatic characters, but only the colonel garners any real interest. This is Gosling’s least interesting role. I walked out of seeing “Only God Forgives” wondering what the heck it was I just saw. Is it a lot of things…or, nothing? I should not have to wonder which it is, but I think it is nothing.