One Direction: This Is Us 3D 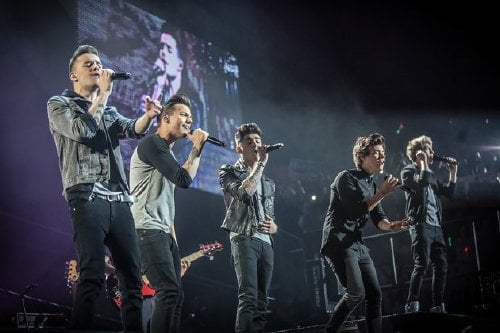 In 2010, Britain's 'X Factor' judge Simon Cowell saw five male solo auditions who didn't make the cut but he had a hunch and offered Niall Horan, Zayn Malik, Liam Payne, Harry Styles and Louis Tomlinson the chance to stay in as a boy band. They came in third, but fans were so enamored of the lads who refused to follow convention that they propelled them into a worldwide phenomenon, breaking one record after another. Documentarian Morgan Spurlock ("Supersize Me") took on the task of following the group on their current global tour, showcasing not only performances, but backstage shenanigans and down time in "One Direction: This Is Us 3D."

Fans of the band are going to adore this look at these 19-21 year olds who seem to have a genuine connection and devilish sense of fun and even non-fans may be surprised at how well these guys come across. But make no mistake - although there's plenty scenes of the guys clowning around, visiting friends and family and interacting with fans, this is a template concert/behind the scenes documentary whitewashed to only put the best face forward. Although there's plenty of song, these five guys travel the world with no wine and no women except their moms (Taylor Swift, briefly attached to heartthrob Harry, has been excised). Spurlock charts the guys ascendance from their (sometimes embarrassing) 'X Factor' auditions, with plenty of on screen input from producer Simon Cowell, before plunging into the here and now. We hear that the group is a 'little edgy,' 'somewhat dangerous' and 'slightly anarchic' and indeed their music, although pretty generic sounding to my ears, does have a bit of rock to it, they buck the lookalike choreographing conventions (dancing is kept to individual moves) and their humor is irreverent. The fans look Beatlemania-style frenzied and we get a Spurlockian aside with a neuroscientist and animation analyzing how music causes dopamine to course through the brain. One of the film's biggest surprises is that one of these so pleasured, filmmaker Martin Scorsese, visits back stage. The guys bring their moms to Madison Square Garden where they all gape in astonishment at the merchandising and marvel at their boys' success. In Amsterdam, they're spotted by a fan and within minutes holed up in a Nike store (merchandising!) by a mob. At play, Harry's wheeled around in a garbage bin, their handlers chase them down to get them on the stage and Niall disguises himself as a Glaswegian security guard who disses the band to unsuspecting fans. At a promotional screening, when Harry speaks to the camera barechested beneath his rumpled bed sheets, a whole row of young women behind me almost passed out. The concerts are hit and cover heavy and Spurlock's camera puts on stage and on the lifts the group performs on. Each gets his moment, Niall playing guitar, Zayn heavy lifting on solos, Liam seemingly leading and Louis, the eldest, smoothly crooning. If there's a star among the group it's Harry, yet he's just one among five. Each expresses so much fan appreciation it almost begins to feel like lip service, but these guys really never seem insincere. There's all amazed, even nervous, when they see the Mexico City venue where they'll play to 65,000. Spurlock emphasizes jumps, leaps and other moves with slo-mo and a visual device that segues into animation. The 3D effects at London's 02 Arena are genuinely worth a ticket upcharge. "One Direction: This Is Us" has already caused a riot at an L.A. promotional screening. Fans are going to eat this alive, but anyone looking for anything beneath the surface won't find it here.