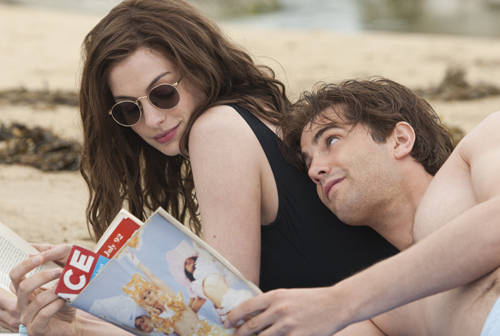 It is college graduation night, 1988. Emma (Anne Hathaway) is a working class girl looking to her future as a writer. Dexter (Jim Sturgess) was born with a silver spoon and looks forward to a comfortable, pampered life. This unlikely couple will meet on that night, 15 July, and a bond that will last 20 years is formed on that “One Day.”

On July 14, 1988, bookish liberal Emma Morley (Anne Hathaway) finds herself paired up with her hidden crush, the good looking, silver-spooned Dexter Mayhew (Jim Sturgess, "The Way Back"), after graduating from the University of Edinburgh. They share a sexless night in bed, but the next day their tentative attraction is sidelined by the early arrival of his parents. Somehow, the two who had little to do with each other in college remain best friends always just out of synch as we check in on them every year for twenty on that "One Day." David Nicholls, who also adapted his last college romance ("Starter for 10") for the big screen, deserved a home run here. His novel may have had the biggest romantic obstacle going in the male ego, but even with its yearly day device he managed to create two full characters and their worlds, both separately and apart, and, in the end, his book was quite moving. With the illustrious director of "An Education" at the helm, how could things go wrong? Well, there are two major reasons. Either Nicholls hasn't done a great job adapting his own work or Lone Scherfig chose the wrong way to pare it down and star Anne Hathaway has given perhaps her least attractive performance to date as Emma. It's a shame, because Jim Sturgess is hugely appealing as the monied lad who chases tawdry fame and the booze, drugs and women that come with it and the filmmakers have done a good job flipping through the changing styles and mores of the day over two decades. Hathaway's Emma is nerdy because her hair isn't chic and she wears glasses and combat boots with dresses and reads poetry. Dex has clearly coasted along on his looks and social status, but Sturgess lets us see a rippling of interest beneath his flight reflex. These two people can talk together despite Emma's insecurities, but it's the type of combative, teasing, punch-on-the-shoulder talk of good friends who might have benefits. Clearly Emma wishes it were otherwise, but she's content to bask in Dex's reflected sex appeal. The film retains Dex's close relationship with his mother Alison (Patricia Clarkson), soon to be dying of cancer, but Emma's relationship with his parents is limited to that initial badly timed meeting. Why, though, cast Jodie Whittaker ("Venus," "Attack the Block") as Emma's roommate (and Dex bait) only to keep her in the background? The various women who pass through Dex's life are also given short shrift except for the one he eventually marries. We even meet Sylvie's (Romola Garai, "Rory O'Shea Was Here," "Atonement," drawing the character well) whole family in a scene that plays like a non sequitur to the rest of the story. Weird stuff left in, important things excised, mostly on Emma's side of the tale. At least Ian (Rafe 'son of Timothy' Spall, "Hot Fuzz"), Emma's settled-for boyfriend, is made prominent as Spall is another of the film's pluses as an unsuccessful comedian who knows his adoration is not reciprocated (Hathaway shows such disdain for the guy, though, it's almost ludicrous). But for the most part, everything about Emma is more a reflection of Dex in her life than what goes on without him. Maybe someone realized Hathaway wasn't working here. For starters, her accent is deplorable, an American idea of what 'posh' British sounds like that wavers in and out. She can deliver Emma's wit, but fails to make her likable. Sturgess, on the other hand, makes it clear why Emma would desire him, even when he admits to being a horndog or becomes a media laughing stock. His is a nuanced person while Hathaway sashays about. The film ends with a flashback to that St. Swithin's Day (a British version of Groundhog Day) when Emma and Dex climbed Arthur's Seat. That first meeting may have held the promise of a lifetime but it hasn't been kept on its journey to the screen.

Adapted by David Nicholls from his novel, Danish director Lone Scherfig (“An Education”) tells the story of a decades long friendship and love between two people. After Emma and Dex have their one graduation night fling, neither expects to see the other again. This proves wrong (of course, or we would not be here) and the film begins its 20 year chronicle of their lives on 15 July each year. Poor but hardworking Emma’s dreams of living in Paris and becoming a famous novelist, but a college degree in literature does not open many doors and she has to work to pay the bills. On 15 July 1989, she begs Dex to help her move into a tiny apartment and she still is optimistic about life and her career. Dexter continues his happy-go-lucky ways. 15 July 1990 finds Emma waitressing in a Mexican restaurant in London while Dexter lolls around Paris spending his parents’ money. This cycle continues for the next 18 years and we see Emma and Dexter, together some times, with others other times or just alone. Year by year we see each character change and grow or, for Dexter, not growing enough. This annual visitation on that titular day makes for episodic storytelling. Because the episodes are so far apart in time, the story does not flow like a novel would. This must be because of the condensation of the original work and may not have done the source justice. This is odd, considering the scripter adapted his own book. Anne Hathaway and Jim Sturgess give yeoman performances but there is little chemistry between the serious Emma and the carefree Dex. (Their fortunes flip as their stories tick through the years.) Once away from these two, though, things go flat. The supporting cast is given little to do, except for Patricia Clarkson as Dexter’s mother, who gets the thankless job of playing the dying cancer patient mother. Director Scherfig, when given a linear screenplay like “An Education,” shows talent as a storyteller. But, given a story that spans an epic two decades, there is little to keep your attention for long. Jumping back and forth between Em and Dex on their day and showing how things change for each is disjointed. You do not get the feel for what happened over each proceeding year making “One Day” feels like a Cliff Notes adapted for the screen.